The forecast rain for today didn't eventuate.  In fact, it was quite a pleasant day.

We had decided today would be the day we unpacked every cupboard, sorted the contents and packed them ready for moving off the boat.  I knew it wasn't going to be fun but it was a job we couldn't avoid.  I made a start while Mick gave the shower waste pipe and pump a once over.

With the suitcases out from under the dinette seat and put on the bed I soon had the boat in a state of utter chaos.  All the things we want to take home, but won't need in the meantime, were packed into the bigger of our two suitcases.  I can't believe we are taking these cases home again.  I chose them to bring over expecting there would be no possible way we could store them on the boat and they would likely be thrown out.  They are the two worst of our luggage selection.  The smaller case we will use for clothing etc while we travel around during our final 3 weeks in England.

I don't know where it came from but sometime during all the "to and fro" of moving stuff about I noticed one of us...... no mention of which it might have been..... had managed to get grease in a big streak on the duvet cover and bed sheet.  I wasn't happy as washing hadn't been on the agenda for the day.  Out came the stain remover.

As the packing went on Mick kept coming up with more things he simply shouldn't or couldn't leave behind.  He had bought a couple of chimney brushes and a set of rods that join together to make a very long pole to use to clean the chimney.  He was sure they would fit diagonally in the large suitcase.  Wrong!

We still had to keep out the bare minimum of clothing for the next few weeks and the suitcases were full.  There were no shoes in the bags and the pesky rods were still lying there on the bed looking at me.  Mick had gone into the village to buy bacon.  He says the village butcher has the best smoked bacon he has ever had.  Meanwhile I managed to manhandle the large suitcase carefully back to the dinette.  As I pushed and shoved it back into the space under the seat I noticed a big streak of grease on my tshirt!  Out came the stain remover...... again!

When Mick returned we pondered the problem of how to get everything home.   Excess baggage at the airport?  Ship another box home?  Both were expensive options.  We decided to look at the cost of the largest suitcase you can get and that was the answer.  We don't need another suitcase but it's the cheapest solution to the problem.

I got the smaller suitcase and the carry on wheelie case under the dinette and put everything else out of sight in the wardrobe.  Now what's left in the lounge room cupboards will belong to Tore and Kirsten.  One thing we had told them we wouldn't leave behind was the vacuum cleaner.  The cord was a bit dodgy and it was due for the rubbish bin.  The other day when Mick got it out because he couldn't stand the floors not being clean, we discovered the time had come.  It tripped the cut off switch.  So the floors are still dirty.  Another problem without a vac is the vac bags can't have the air sucked out of them.  We swapped back to the summer weight duvet but the thicker one is now taking up a lot of space.

We ended up doing a load of washing to wash the duvet cover, sheet and my tshirt.  Just as the machine finished Tom and Jan from nb Waiouru came by and we had a chat and a look at the boat.  The sheets weren't draped around the boat yet.  Good timing.

Later Mick took the rubbish for a walk while I hung the washing. I felt the boat lurch with somebody stepping onto it.  I called out to Mick, thinking it was him, but there was no reply.  I looked out the side hatch but couldn't see anyone but the boat continued to sway.  I leaned into the cratch to peer out and as I reached for the zip I got a real shock to almost push a fellow into the water as he climbed along our gunwale and across the cratch cover to reach the bow.  He said something about pulling his boat into the lock and off he went.  How's the cheek of him!  He was, in fact, hauling a short boat but with the rear doors on our boat open it was obvious someone was aboard and he should have knocked and asked. I would gladly have gone out to help and would definitely have rolled up the cratch cover to avoid it being stepped on.

Late this afternoon we heard a bit of revving coming from back further.  Mick went out to investigate and found a hire boat stuck across the canal.  They were trying to turn but had been forced across by the wind and were stuck fast.  We have a lovely view from our windows at this mooring.

Mick's sporting a cut on his nose.  The other day he leaned over to give me a kiss while I sat working at the dinette.  At that moment he heard a boat coming by and quickly turned his head to look out the kitchen window and smacked his nose against the partition wall between dinette and kitchen.  It bled for ages.  That evening when we chatted on Facetime with Barry and Carol it was the first thing Barry mentioned.  Poor Mick. 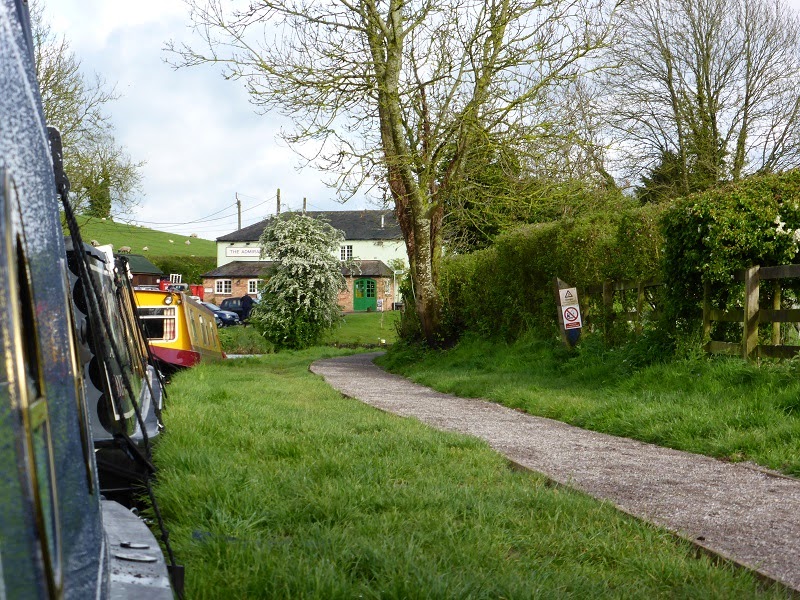 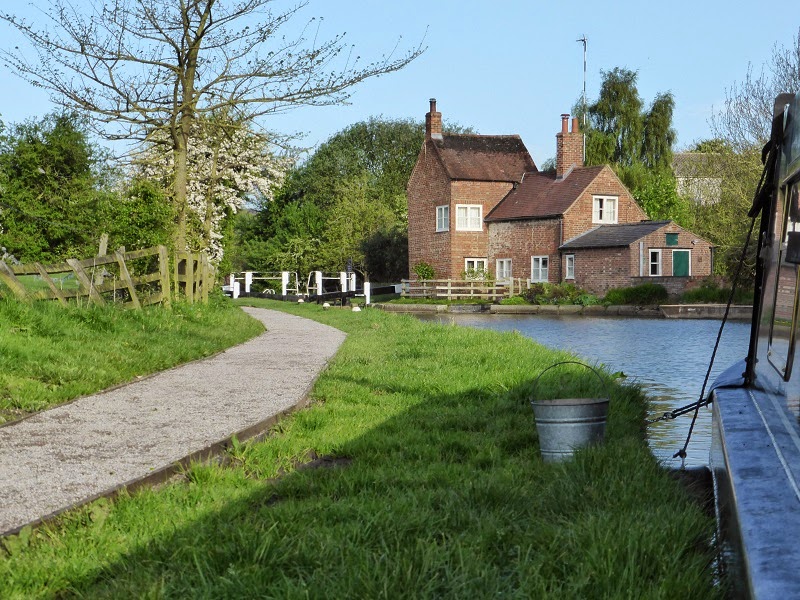 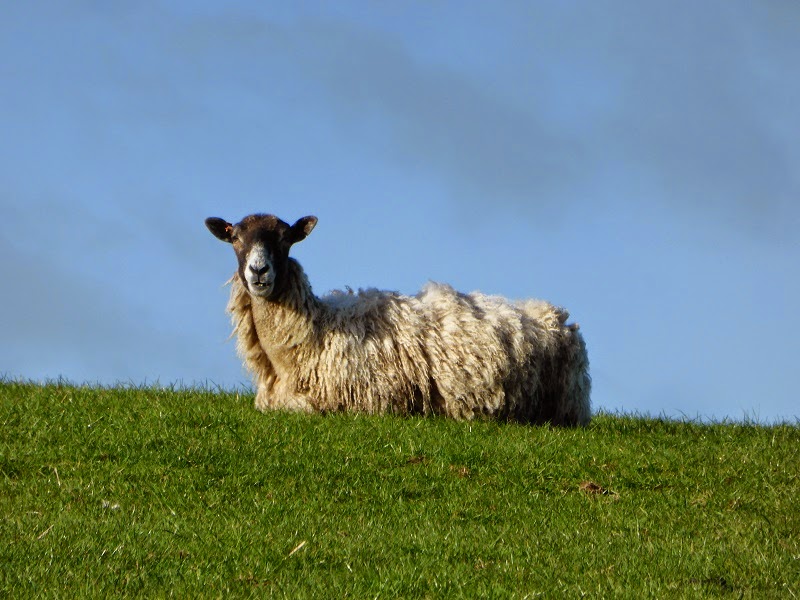 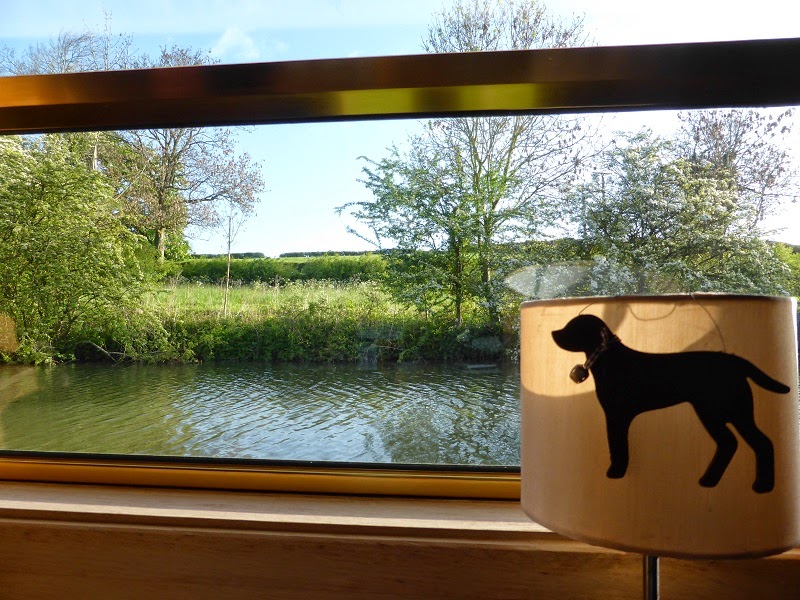 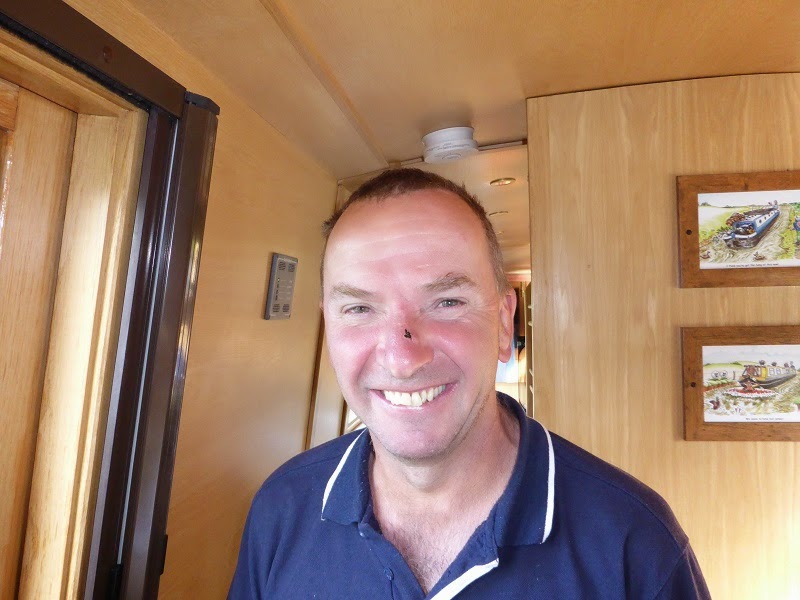 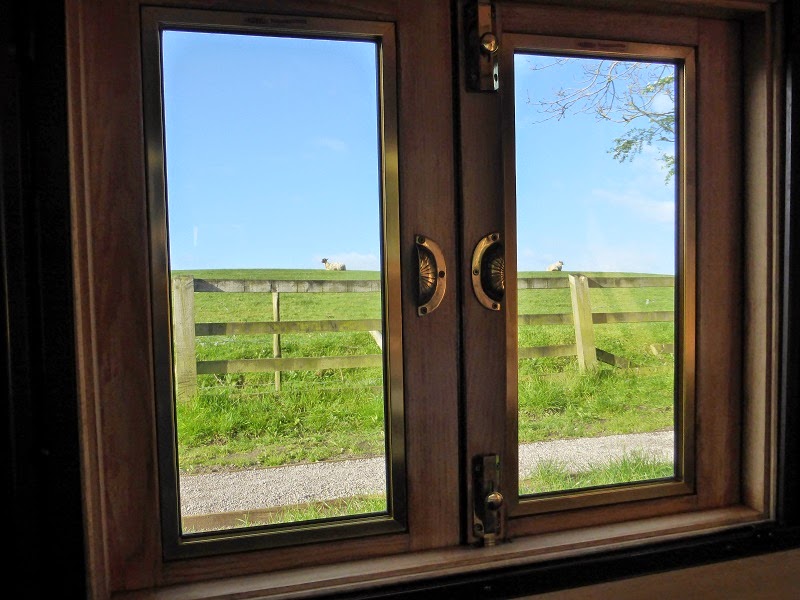 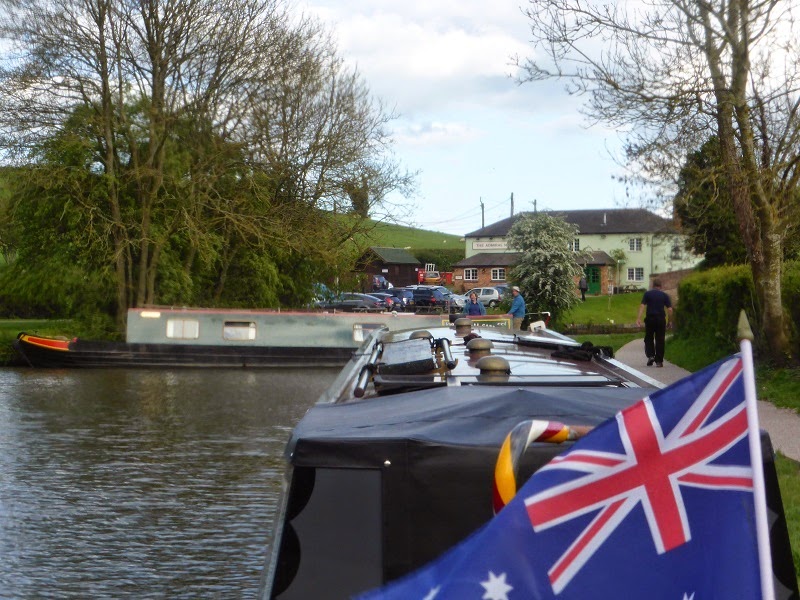 Hi Elly Mick bet you whacked mick on the nose for getting grease on the bedding. ALAN.

Alan,
I felt like whacking him on the nose, that's for sure!
Elly :)