Before we left Australia we started trying to find methods of double glazing narrowboat windows without spending a  fortune.  At the the time we were thinking of keeping heat in the boat.  We didn't know then how much we'd value the idea until we got here and started wiping windows.  It's the condensation that has driven us in our quest for a double glazing solution.

Regular readers may recall that we've already had an attempt at doing four of our windows and we've been moderately satisfied with the result.  But... it's had drawbacks. There's no question that it's made a dramatic improvement to the amount of condensation on those windows but it hasn't eliminated it altogether.  Maybe that's an impossible dream!  The problem we've had is that we need to be able to remove the secondary glazing to dry the window behind it.  Our method has made that task difficult.  To get a good seal, the fit had to be tight and that makes removing them and putting them back a bit of a pain.

At our "boaters afternoon tea" two or three weeks ago we met Jim and Joan from nb Two Jays.  They kindly offered to let us have a look at their brand new boat.  We noticed that they also had DIY double glazing done using a method we hadn't thought of or read about yet.  They'd used self adhesive magnetic strips - one side adhered to the timber architrave around the windows and the other side adhered to the sheet of perspex.  They were happy with the result and said it was very easy to remove the perspex to dry the window down periodically.

We came home and discussed whether we should have a second go at it and try the magnetic strips.  We'd need to order new perspex because ours sat inside the window frame but using the magnetic strips it needed to sit outside.  Co-incidentally, the following day Roger and Yvonne from nb Fizzical Attraction blogged about their new DIY double glazing and they'd used the magnets too.  Roger emailed details of how he ordered the perspex and the magnetic strips so we measured up and ordered them.  The total cost was about £175 including having the sheets cut and delivery.

Everything arrived this week so we've spent the last couple of days fitting it.  They actually look better than our method as we'd previously used draught stop tape that is a bit bulkier and much more difficult to get a good fit to prevent gaps but also have it looking straight.  We've put back the old perspex in 3 of the windows and in the dinette we didn't replace it.  It was a window we had a lot of condensation on so will be a good guide to whether it's worth keeping both of just scrapping the old perspex screens.

I'd much prefer to just have the new screens if they do a good enough job as they are so easy to take on and off.  I'll report back tomorrow with the result!

Amazingly, we noticed very soon after putting 5 of the 6 sheets up (the dinette side hatch is a little more problematic with it's installation so we're finishing that tomorrow) that the boat was feeling hot.  We'd had the central heating on for nearly 2 hours but this was the first time it actually felt hot inside before 2 hours were up.  Now, that's an encouraging sign!  We do think we'll have to crack the front doors ajar now and then for ventilation.  We are, after all, shutting off the current way damp air is being eliminated.  We have 4 portholes and will leave them slightly ajar using the pegs from our broken sock hanger.  We definitely notice more condensation in the bedroom if we haven't left the bathroom ones slightly open.  It will all be a bit of trial and error.

For anyone wanting to give this DIY double glazing a try :

The perspex came from Robert Horne Direct.  You can pay a few pounds extra and have them cut it to size.

The magnetic strips we bought on Ebay (also referred to us by Roger).  We used 12.5mm with premium adhesive.  You need the same amount of both polarity A and B.  We did 6 windows and ordered 25 metres of each.

To put them up we started with Polarity A and made the top and bottom strip on each window go across the top of the side strips.  Then, using Polarity B we cut them the opposite way - so the side strips went the full length and the top and bottom fitted inside.  You can just see this on the photo below.  I wanted the joins to be opposite rather than in line with each other.  Does that make sense???

Here's how it looks.  The first photo is the new version and the second is the old version.  Much neater.
Thanks Jim and Roger for the advice. 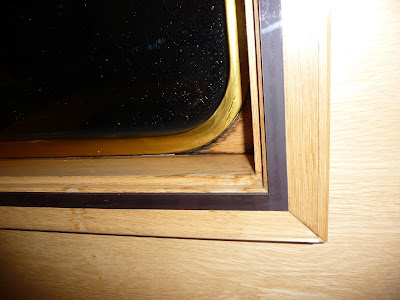 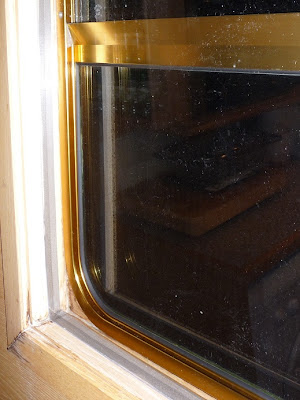 We found a much cheaper alternative on GR. Bought from it was film like cling film that was attached to the inside of the window frames with double sided tape and then shrunk with a hairdryer. Worked a treat and you harly could see it was there. Easy to take off at the end of winter too.
See our blog here http://nzgypsyrover.blogspot.co.nz/2009/12/reasonable-success.html