Today we had to return the hire car and as it turned out that wasn't as easy as it sounds.  We were also expecting a delivery of perspex for our double glazing update.  The marina office is closed on Mondays so one of us should be here to accept the delivery.  Mick bluntly refuses to do groceries on his own and we had quite a list so he couldn't (wouldn't) go on his own to return the car.  To save money we had only put him as the driver of the hire car so I couldn't go on my own. After lots of discussion we ended up calling to arrange for the delivery to be left at the marina door (it's closed Mondays) and off we went.  We made a quick stop to pat our current favourite chocolate labrador.  She's a very enthusiastic girl.

First, Penkridge to Midland Chandlers for the last piece of flue we needed.  Secondly, B&Q for a couple of power tools that had been set aside for us (& Ray from nb Ferndale) as it was 15% off power tools today.  Finally, Tesco where there was a group of school children just inside the doors, loudly singing Christmas carols.  As we did our shopping the sound of their voices echoed around the store.

We were dropped back at the marina by Enterprise at 1pm but there was no sign of our parcel.  2pm was boaters afternoon tea so we gathered again in the little garden hut.  In attendance today : Jim and Joan (nb Two Jays), Gil (nb Shoehorn), Barbara (nb Colombo 2 - did I get that right?), Roland (hmmm... did he mention his boat name?), Elaine (nb Caxton), Dot and Gordon (nb Ewn Ha Cul).  With next Monday being Christmas Eve we thought we'd see if we can make it lunch instead of afternoon tea.

After checking up by the marina office again I rang about our delivery to be told it was delivered soon after midday and signed for by someone called "Griffin"!  Well, I wonder where it is!  Seems we need to do some investigating tomorrow. 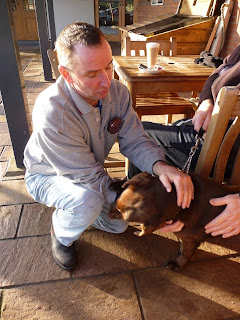 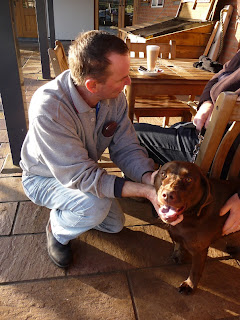