Sue from nb No Problem left a comment yesterday about the tents we saw by Shiplake Lock.  I decided to see what I could find out about them.  The following is courtesty of Wargrave Local History Society

The island camp site consists of 18 plots. It was originally privately owned until 1891, and camping was already a regular activity there by that time, using ridge tents, and lit by oil lamps - as some still are. The land was offered for auction in 1891, for 'potential hotel development', but a benefactor named Crawford paid £836/12/8d for the land, ensured it had a restrictive covenant to preserve the camping rights, and then sold it at cost to the City of London. Due to the distance involved, the City found some difficulty in administering the island, and so in 1914 granted a £1 per year perpetual lease for 2000 years, with the restrictive covenant in place, to the Thames Conservancy. The camps were then run by the lock keepers, who hired out skiffs and punts to islanders. In the early 1900s the conservancy allowed huts to be built near the tents - as it was thought safer for cooking - but they were not to be used for sleeping. At that time, ladies were not allowed to sleep on the island, but had to retire to wooden huts on the Shiplake side. The Thames Conservancy refused - as have the National Rivers Authority and Environment Agency since - to give more than a 1 year at a time lease to the plotholders. Despite that, the community has remained remarkably static - usually plots passing from father to son. The families come from a wide area - the West Country, Liverpool, Leeds etc. Since 1945, there have been 4 marriages between island families.

The river was quiet, apart from barge traffic, in the early post-war period, but gradually Salters steamers became oil fired, leisure boating increased with the advent of fibre glass boats, and narrow boats appeared. The Environment Agency confirm the right to use the plots in the spring each year. Each plot has a wooden hut on sleepers, to try and keep it above flood level, and boards on which the tent is put. It is always a concern as the plot is opened as to what will have happened over the winter months. The canvas is laid out on the boards, the poles inserted, and - with the help of other campers - the tent erected. Once secured, the carpets, bedding and chest of drawers can be put in place! It is a great family event - everyone having ideas on 'how it was done last year'. By Whitsun, the camp is in full swing, and barbecuing starts. Once the lock closes, there is peace and tranquility on the river in the evenings, the sound of Shiplake bells drifting on the air. 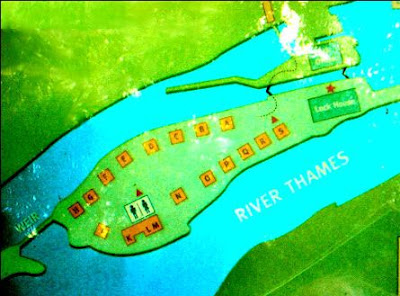 I'm all behind in reading your blog. We have been passed the camping site a couple of times and wondered what it was all about so its been really nice to read about it. Thank you.

Linda, we often look up something that we see along the way. I thought I'd start putting those that are interesting in the blog to remember in future. The camping site was something we just don't have in Australia. Glad you found it interesting too!
Elly