Having no phone or internet at Goldstone Wharf, the only way we could keep in touch with my brother was sending an SMS from Mick's phone that had a weak signal.  Better than nothing.

The shower pump worked ok when Mick had a shower last night but this morning it konked out just as I finished in the shower.  How annoying when Mick had noticed the very same shower pump on a shelf in the chandlery at Norbury Wharf.

Anthony and Leanne offered to come and collect us and drive us back to Norbury for a new shower pump.  They had booked in to accomodation near Tyrley Wharf so we waited until almost lunchtime when there seemed to be a bit of a lull in the driving rain and we made a run for it.  The bridges along here have all been really high so we left the pram hood up.  It was only a couple of miles.   As it turned out we passed under a couple of the tallest bridges I've ever seen.  There was a bit of a land slip beside the towpath and the soil was a rich red.  The water in the cut had been dyed.  It was almost like the water near the Harecastle Tunnel.

Luckily the rain held off until after we got there... and took the very last mooring too!  They arrived just as we were having lunch and we headed off for a drive.... first to get the shower pump and then to Market Drayton.  We're topped up with groceries now, ready for the run of locks we have ahead of us.  We're having dinner tonight at the Four Alls so we'll see what that's like.

When we returned from shopping we noticed the red water was now by our mooring.  There appears to be a noticeable flow on the Shroppie and it has washed the red water down to us.

The new shower pump is installed and sounds a lot better than the old one did.  I guess they just don't last forever. 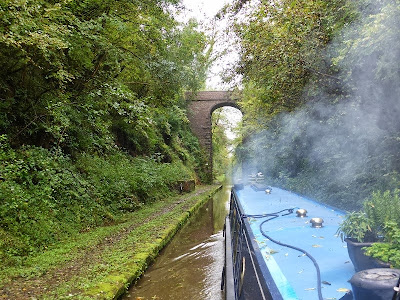 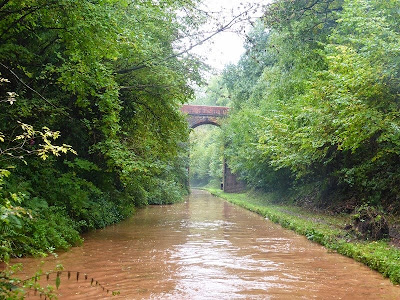 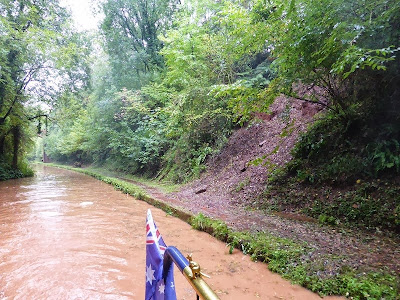 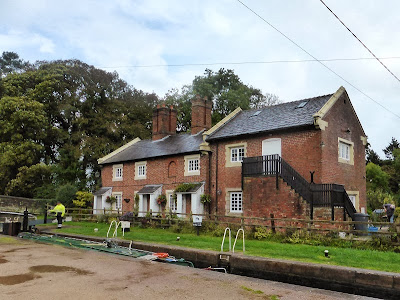 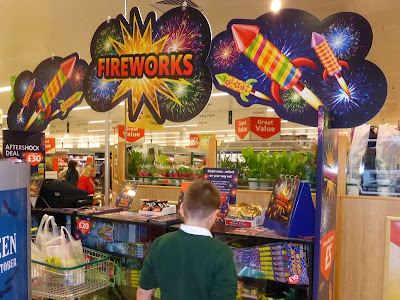 There is a flow on the Shroppie. It's because the water treatment works puts water in the canal at Wolverhampton, and then it's all downhill to Ellesmere Port. That's why the lock by-washes can be really fierce.

We kept encountering the stained water as we went along which made the flow of water really obvious. We just couldn't work out why. I even tried googling it!