There was a last minute water top up this morning, and then we were off.  We collected nb Winton's Folly as we passed by bridge 80 just around from the marina entrance.  It was a bit overcast and although we didn't get rained on today we felt the clouds were chasing us along the way.  A chatty lady at the first lock said that those big black clouds were empty and on their way back from Wales.  Local saying perhaps?

Speaking of the locks... there were two of them today.  At the first lock I opened the gate for Mick to bring the boat out and walked down to the second lock.  A boat was just coming out of that lock towards us and I could see a fellow turn his back to me and close the gate behind the boat.  I called out twice but he ignored me and began winding the paddles to empty the lock.  The boat that had come out was now beside me and he said "Don't waste your breath.  He knows you're there, and I told him I could see you coming!".  The fellow at the lock very deliberately kept his back towards me and tried to act surprised when I appeared behind him.  I said to him that we'd have been in that lock in about 90 seconds if he'd just waited but he pretended he didn't know we were coming down.  No apology and there's absolutely no way he didn't see us.  Mick was already coming out of the lock above when he was closing that lock gate.  The locks aren't far apart.  He went back to bring his boat in and left me to close the gate and wind paddles for him.  Mick was livid and also made a comment to the fellow who still pleaded ignorance.  It was only then we noticed his wife was inside hanging washing.  The cheek of the fellow!  He walked on to the next lock and his wife came out to steer the boat.  She said to me as she passed that her husband hadn't seen us but when I told her the fellow on the boat ahead of them said he had told her husband we were right there she looked a little embarrassed and apologized.  Mick buzzed Barry on the two-way and said not to help them at the lock!

We went on our merry way and forgot all about the silly fellow.  Very pretty countryside again and the sun even forced its way out giving the autumn foliage a glow.  Gorgeous!

We moored up near the aqueduct at Nantwich.  It appeared there was a Halloween shindig going to happen in a park across the trees from the canal.  A huge bonfire was waiting to be lit and there was a carnival.  We were hoping for some fireworks.  The canal is quite elevated as it skirt its way around Nantwich.  A great vantage point for viewing fireworks.  Mick went off for a walk and I stayed back to work.

I happened to glance out the dinette side hatch at a passing boat and saw a familiar name.  It was nb Jasmine Weyr with Lesley at the stern peering in our windows to see if we were in.  I called out to her and she and Howard came across for a coffee after they'd moored up.  We had a good boaty chat and Mick returned joining in.  We'll see them again tomorrow to check out their boat.

The bonfire beyond the trees was lit at dusk and we could see the twinkle of the carnival ride lights through the trees.  At 8pm we heard the first crack of fireworks and rushed to the side hatch to watch.  It was a fabulous display and I got a few nice pics. 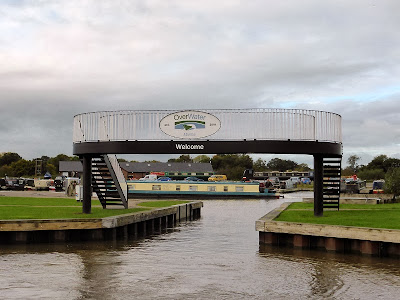 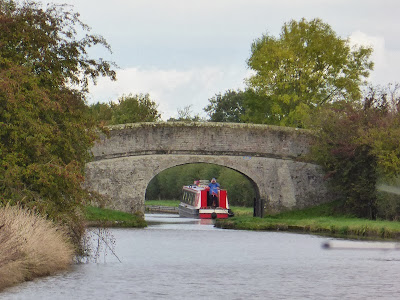 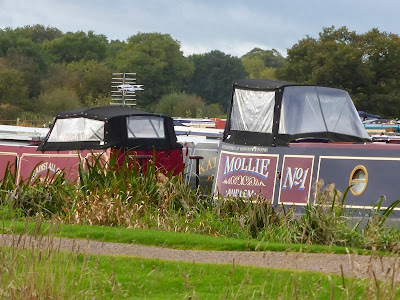 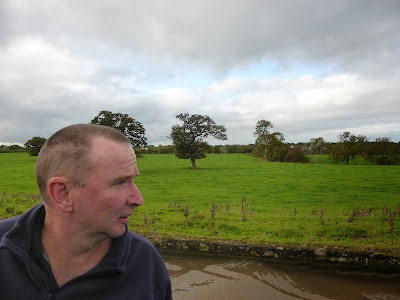 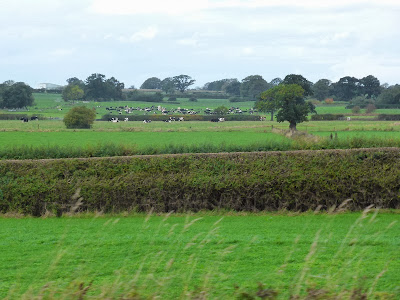 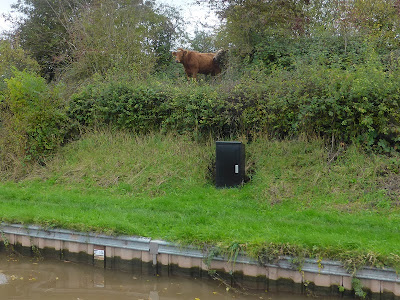 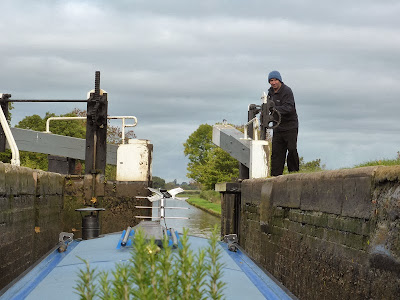 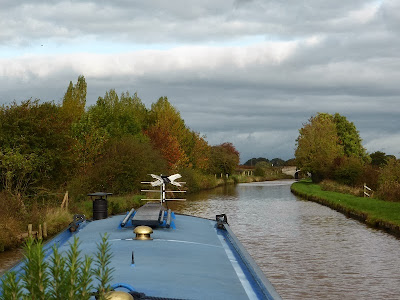 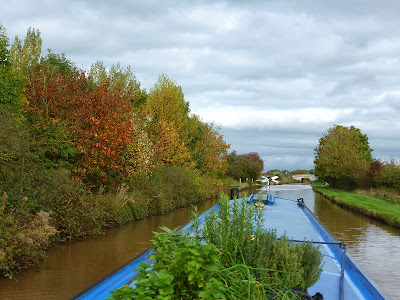 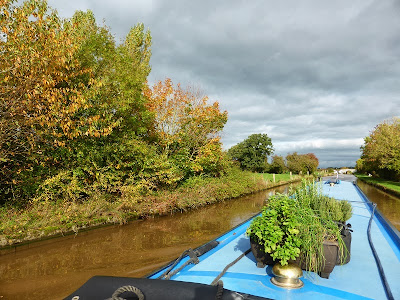 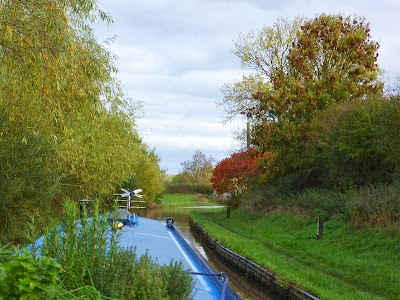 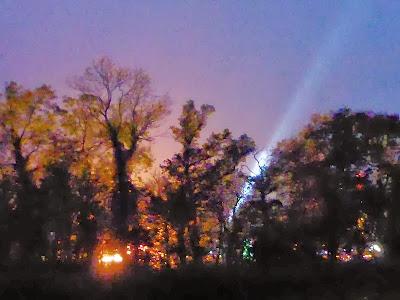 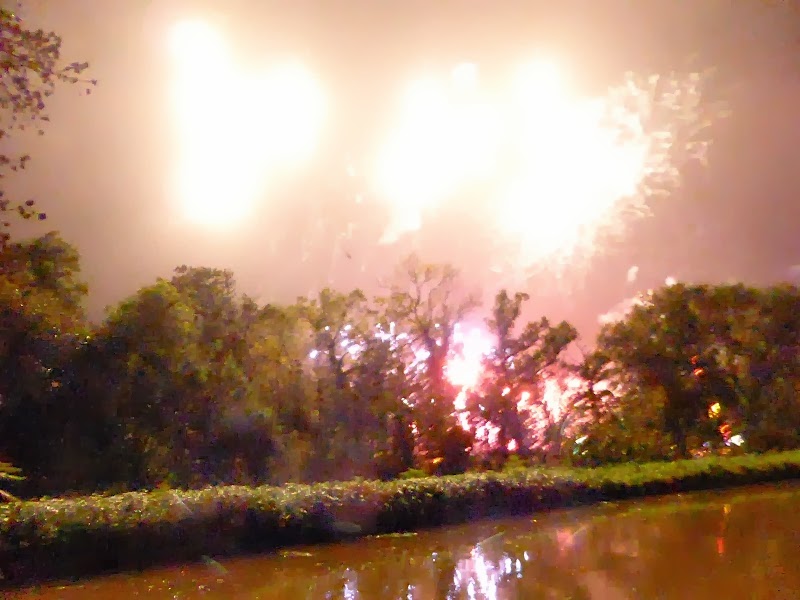 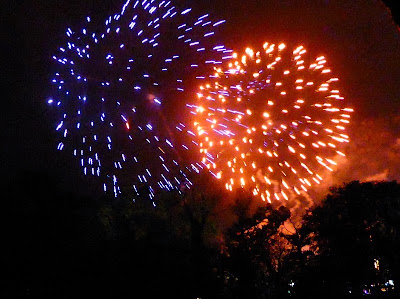 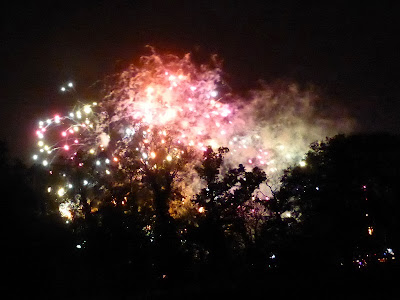 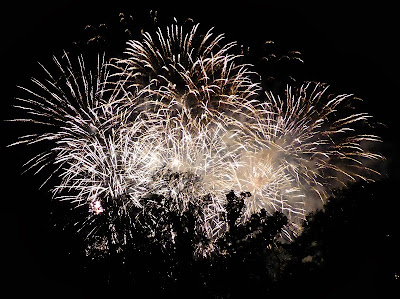 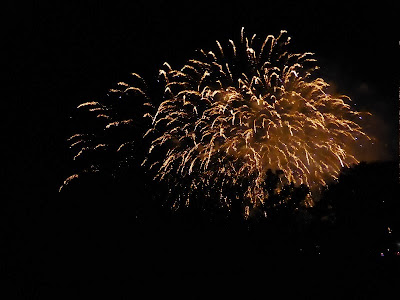 Maybe it's something to do with the Hack Green locks, because a very similar thing happened to us on the way up them in September. On that occasion, each of the two boats involved blamed the other for not seeing us!