This morning we had a visit from Faye, Ryan and Chayse to check out the boat.  It's always interesting for visitors to compare boats.  We had a chat and they went on their way.  Lovely to meet you both at long last.  nb Winton's Folly were going cruising around the local loops. We walked to Tesco for a grocery top up.

Despite the closed windows and portholes, bungs and blinds, the music and revelers outside on the balcony of Flapper were extremely loud last night.  Saturday night is definitely not the best night for mooring in Cambrian Wharf so we'd made a mistake.  Today when it started up again at lunchtime we decided we'd had enough and packed up to move around to the 48 hour moorings.

Just as we were preparing for the off, nb Winton's Folly appeared around the corner.  They were back from their cruise.  Chayse waved from her seat in the bow.

We settled into a mooring near where we'd been a month ago.  I had walked around to see what was available while Mick finished topping up the water tank.  A short boat pulled in just as I was standing there at the moorings and they moored right in the middle of the available space.  Plenty enough for three boats but there's a gate leading down from a large carpark and we recall last time having people peering at us as they walked through the gate.  The short boat had left three ring spaces between it and the next boat.  Not enough for 57 feet and behind them we'd be in front of the gate again.  I politely asked if they'd move up a couple of bollards and he cheerfully agreed but she was rather unimpressed.  Oh well.... can't win them all.  They weren't even staying overnight. 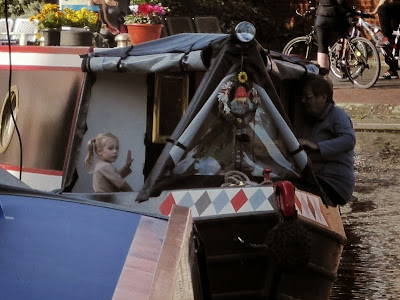 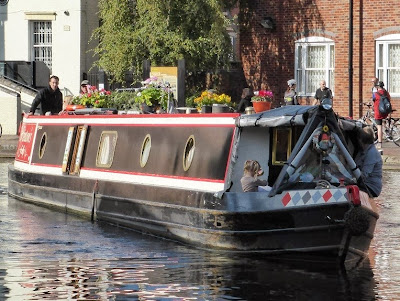 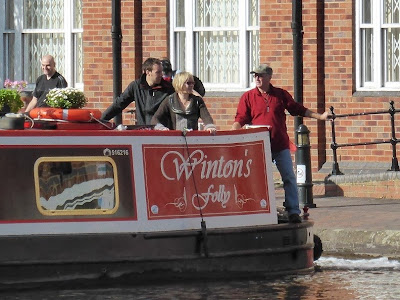