Finally feeling better today.  We had decided that we'd move on in the hope of getting a spot on the visitor moorings right in Stone.  We met a couple who will be coming into the marina for the Winter so we'll look forward to chatting some more Cathy and Martin.  See you on a Monday in a couple of weeks time.

It's a strange feeling bringing the boat back through Stone.  I so clearly remember negotiating our way through all the moored boats around the Stone locks and thinking I'd never have the courage or experience to get around them. Today I did it all myself, including getting in to the awkward water point directly below one of the locks.  At the last lock for the day there was a bit of a hold up.  Two boats had passed us while we filled with water so we had to wait for them at the lock with the worst approach of them all.  There's just a single spot on the lock landing and then a long row of moored boats behind.  Opposite is a hire base with boats jutting out in all directions.  I surprised myself at the fact it didn't faze me at all.  Not even when I discovered that the short hire boat who had passed us earlier had moored right bang in the middle of the single lock landing spot.

They were lovely folk and we'd had a brief chat earlier but as is so often the case they were totally oblivious of anybody else, not even sharing the ring with the boat behind them.  They were getting off the boat as I approached and looked a little alarmed when they realized there was a boat just gone in the lock and I now had nowhere to go.  I couldn't have asked for it to happen better though... the boat actually reversed in the direction I wanted and I got our stern rope around their taff rail.

It was dry when we started our preparations for the off but of course it didn't last.  The entire time we were on the move there was a persistent drizzle.  It cleared for a couple of hours this afternoon but now tonight, it's raining again. 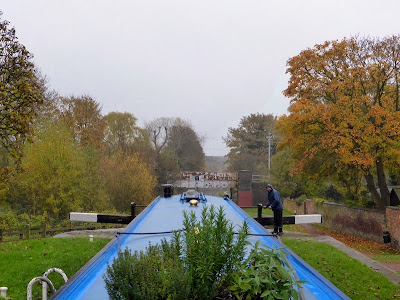 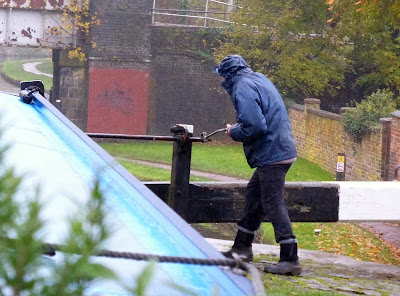