Back in the marina

We were up early this morning so we didn't take the entire day to get sorted back in the marina.  I walked the towpath while Mick chugged along. We stopped on the way to have a quick chat with Roly and Bev and off we went. It will be the first of many many walks along that towpath although we use the road once it gets too muddy.  At Aston Lock it felt like we'd arrived home after a long journey.

What a strange feeling to turn into the marina again. There were boaters to wave to through their windows and then we tied up under the bridge for diesel and a pumpout.  We did the usual circuit - out the exit - along the canal - back in the entrance - by which time there were a few spectators to watch us come into our new berth.  Not to let us down, the wind had really picked up.  We're much closer to the entrance this time and our previous method of aiming for nb Stanley's porthole and then reversing back was out the window.   Mick managed the task admirably and without any hot shoe shuffling.  What a difference a year makes!

There's positives and negatives about our new position.  On the negative side we are next to a rusty tin can.  It's not a pretty sight from that side of the boat.  On the positive side the tin can is shorter than us so we have a fabulous view from our living room window out to the marina entrance.  We're still looking to the front at nb Stanley but across it's bow.  We almost look straight down the line of boats moored on that pontoon.  I'll take some photos tomorrow.

We mucked about settling in.... aerial, pram hood, fenders, coal bags, mats on the pontoon, paperwork, power leads, electricity cards.  This evening we played cards on nb Winton's Folly for the last time in a while.  Barry and Carol are off to India tomorrow.  They came in later so I could check in online for them.  Barry didn't let us down... he did his usual grizzling... this time because we couldn't get him a window seat on the plane.  Awwww..... 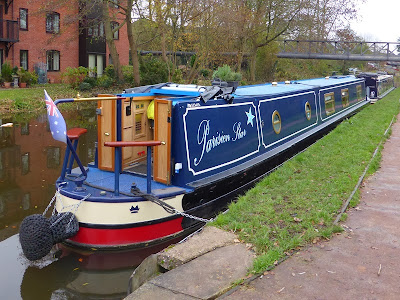 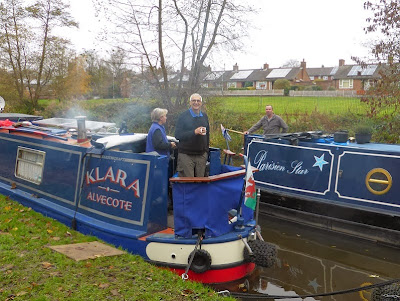 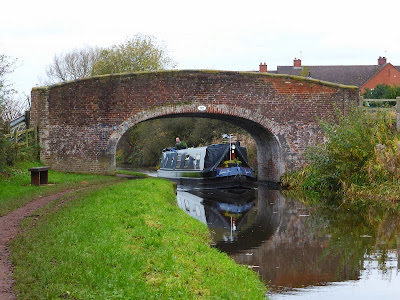 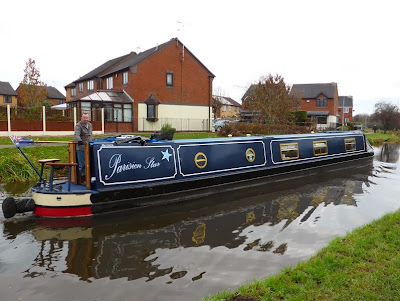 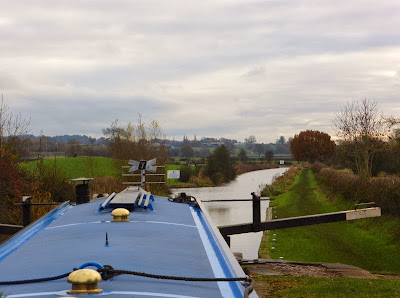 Hi Elly.
I;ve been reading your blog with interest after stumbling on it searching for pram hoods.

Having read since you started the narrowboat adventure, I've come up with one question which I hope you'll be able to answer.

What drove your decision to start in October (end autumn) as opposed to March (beginning of spring)?
It seems that you would have only had one winter in the marina and managed pretty much two full cruising seasons on the cut.

You're not the first to ask this question. There was one main reason from the beginning. I had always dreamed of living an entire year in another country.... one that had cold Winters. Mick agreed we would see out an entire year.

If we had started out in Spring, what would have been the point of staying on beyond November to just sit in the marina for a few months and then go home? The thought at the time was that we would get a few weeks cruising, get over the Winter, have a good cruising season and then go home.

We got talking to a broker in about August and we just weren't ready to be thinking of selling the boat. Plus, we wanted a few weeks to cruise North of where we'd been so far, and we thought it would be a better time to sell the boat in April/May than in October/November.

We've met at least 2 Aussie couple who came over earlier in the year and have now gone home. It makes logical sense but it wouldn't satisfy my "whole year" dream!

Are you dreaming of a narrowboat too?
Cheers,
Elly

Thanks for the response. :) I understand now that it was a planned thing and now plans have changed.

Yes. I grew up in England and my family still lives there. Was actually cruising the Trent & Mersey in June/July this year with my Dad who has owned a few.

Ultimately I am narrowboat dreaming too, but am thinking I would do March one year to October the following getting the chance for a lot of cruising into about eighteen months. I think one UK winter on the cut is enough thanks! Especially judging by those photos!

Thanks for sharing the experience.