We ordered our Ocado delivery for 8-9am yesterday morning. It was great timing as Mick poked his head out to see if they were there yet and he saw the truck coming down the driveway.

We noticed the water pump was struggling when one of us used the shower but it was fine when using the tap in the kitchen. We came to the conclusion that despite our efforts with soaking the shower head in descaler, it was too blocked and we needed a new one. We hadn't been able to find one in Stone so Mick took himself off to Stafford on the bus.  It did the trick and the pump sounds fine now.  He even bought a spare shower head.... not that he's over the top about such things.

I got a bit of work done before running into a problem I couldn't resolve until someone was in the office again.  What a shame.... nothing for it but to work on my quilt!  I've made it my mission for Winter to use each of the fabrics that the girls in my sewing group gave me before we left home.

Mick had a pontoon haircut.  We took the £7 folding stool out onto the deck between us and nb Winton's Folly.  He's not so keen on an audience for the process.  I've had a sore back on previous occasions from crouching over in the cratch to cut his hair where nobody could see.

Today's not such a nice day.  It's been a little gloomy from the start.  The wind has increased and there's drizzle.  A good day for work catch up.

Here's a photo of the blocks I've made since we've been on the boat.  I'll make good progress over Winter.  There's plenty of dark gloomy days to come I'm sure. 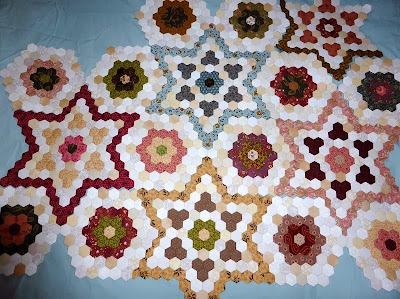 Hi Elly, the quilt looks lovely, is each piece hand sewn or do you use a machine?