Yesterday (Friday) was rather a gloomy old day.  Jim and Joan from nb Two Jays came over to visit and we whiled away the afternoon chatting.  I had intended to walk into Stone but with the forecast for Saturday looking so much better I thought I'd wait.

It turned out to be a good decision with this morning dawning clear and bright.  We didn't mess about too long and were ready to go by 9am..... early for us these days!  We headed off along the path by the marina field thinking we might see nb Klara along the towpath into Stone.  Midway along the field we saw her on the canal next door with Bev waving from the window.  By the time we'd crossed the bridge and back-tracked along the towpath a little the kettle was boiled.  Roly was off for the day to watch a rugby match in Wales and Bev was enjoying her solitude with the three cocker spaniels for company.  We had a cup of tea and a chat and continued on our way.  Halfway to Stone we spied a familiar figure ahead.  It was Gil from nb Shoehorn.  We called out and walked the rest of the way with her, chatting as we went. 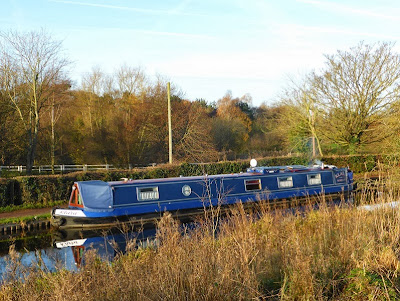 The bridge hoppers were back on the Stone moorings.  We think perhaps they were moved on about the time we came down the last lock just over a week ago.  It was incredibly quiet that weekend.  Now it's full again, with one boat that we won't mention the name of having now been on the 48 hour moorings for 3 weeks that we know of.  There was not a single space left so useless for us if we'd wanted to take the boat up there to go shopping.  We saw nb Moriarty but Martin and Cathy weren't in sight.  I think they said they'd be coming into the marina this weekend so we might catch them then.

Several boats came into the marina today and I expect tomorrow will be the same.  We quite like our mooring with a birds eye view of the entrance to the marina.  I don't know why it is but the sound of a boat engine sends us hurrying to the bow to peer out and see who it is.  I'm sure we aren't the only ones with such curiosity.  It breaks the monotony of marina life.

This afternoon we did some more washing and then topped up the water tank.  Mick's little brass hanging rail has proved to be a winner.  The clothes dry in no time at all hanging up there beside the insulated flue of the Acorn stove.  We should have done this a year ago! We never leave things hanging there unattended.  If we leave the boat or go to bed we always take them down.  Having had a friend lose her house to fire and two other families in our town have their homes catch alight from clothes on a rack in front of a fire.... we're extremely cautious. 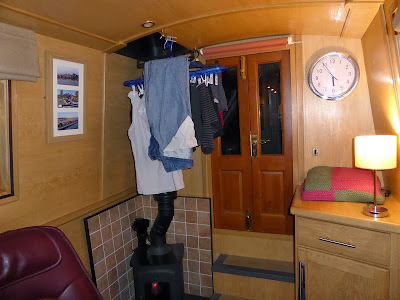 There were decals on the side hatch windows of the boat when we bought it.  The name Parisien Star came from the name of a race horse so that's what was on the glass.  It had no horsey significance to us so we removed the decals and spent a considerable amount of time with white spirit and various other cleaners to clear all trace of them.  You can't see at all that they'd been there now.... except sometimes when we open the privacy screen on the side hatch in the morning and a light mist of condensation eventually appears.  Now and then we see him leaping across the glass. 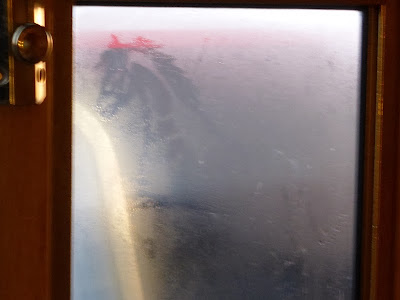 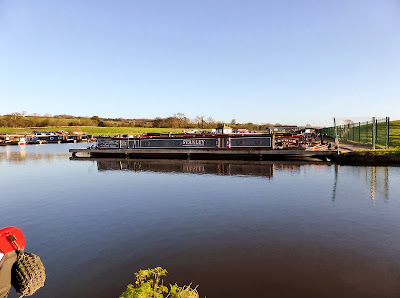 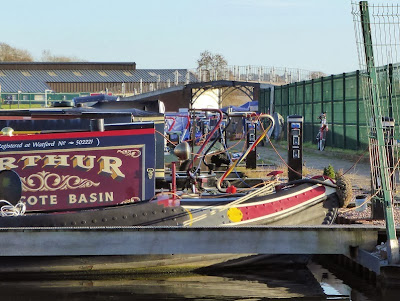 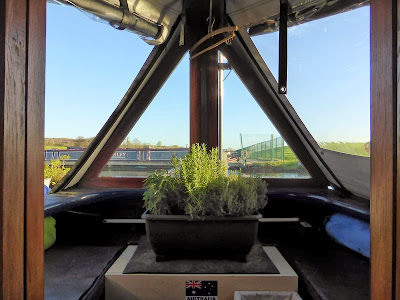