There was a sunrise this morning to rival last night's sunset.  Pity I didn't have my camera when I went off the pontoon.

A while ago I bought a small casserole pot to use on the Acorn stove.  We have an old Le Creuset one that we brought from home but it's larger and overhangs a little when we put it on to bubble away.  The new one was a cheapie and today I thought I'd use it to cook up some soup.  Well, it just proves the point that you get what you pay for.  It barely reached boiling point when I heard a crack and saw that it had cracked all the way around.  Lucky I didn't have it full to the brim with soup.  Out came the trusty Le Creuset.

Other than that, I've had a good days catch up with work and Mick got some of his boat chores done.  It was another glorious day.... mild and sunny.

Last night's snooker final was an exciting match.  Neil Robertson went from 5-1 down and not performing too well to winning the match 10-7.  We've thoroughly enjoyed watching his journey.  Winning the UK Championship is a great achievement for him as it's his first time winning it and it gives him a hat trick for the year having already won the World Championship and the Masters.  Good on him! 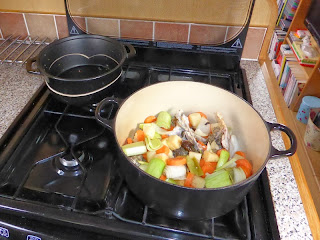