A visit from Clinton and Sharon


Yesterday we had a walk around the shops in Stone, stocking up, collecting parcels from the post office.  We have the perspex polishing kit so that will be a job for me once we reach the marina.  It felt a bit strange to first have the lady in the post office remember us from last year (we had several parcels sent there Post Restante), then we saw Jo (another moorer on our pontoon in the marina) who works in the Co-op, and finally waving to another boater we'd met a couple of days ago.  Makes us feel like we're in our small town back home!

We're starting to encounter some of the other Winter moorers.  We gave Paul from nb Caxton a wave through the window as we played cards on nb Winton's Folly the other day, we've seen Diane from nb Ferndale again, and today Roly and Bev on nb Klara moored up a few boats down from us, giving us a wave as they walked past.  Yesterday Andy and Sue from nb Festina Lente passed by on foot and we had a chat with them through the window too.  They are new additions to the Aston gang this year.

We had visitors today - blog readers Clinton and Sharon.  They'd had the last week on their share boat.  (It was lovely to meet you both and we hope you had a safe trip home.)  Here they are just seconds after he slipped in the mud towards the gap between boat and canal edge! Being very careful here. 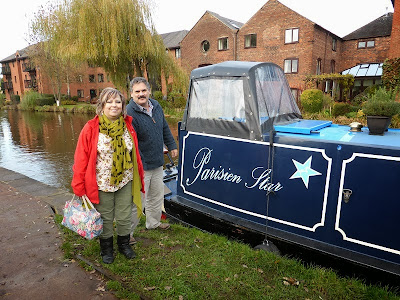 I did a last run to Morrisons after Clinton and Sharon had gone and Mick picked up a few bags of coal from the chandlery.  He'd bought the last one the other day but there was new stock in now.  This afternoon we had a catch up with Roly and Bev.  We last saw them at the Tardebigge lock flight nearly 2 months ago.

Barry and Carol on nb Winton's Folly have headed off to the marina today to prepare for their holiday to India.  They leave on Monday.  It's the end of our year's cruising together.  Who would ever have thought we'd find such wonderful friends and cruise with them so merrily for such a long time.  We've loved every minute guys!

So... life's about to change a bit.  We'll be tucked up on our pontoon tomorrow night.  We're looking forward to Monday's afternoon to so we can catch up with everyone again.
Posted by Elly and Mick at 06:19

Thank you for showing us around your lovely home, she really is wonderful. Enjoy your time in the marina will be in touch soon. Clinton

Clinton, you're most welcome. We enjoyed the chat! Talk soon.
Elly