Winter in a marina or out on the cut

We always knew when we planned this adventure that we would spend Winter in a marina. I remember reading blogs of boaters stuck in thick ice for weeks a few years ago. That doesn't much appeal to us.

There is a definite trade off though. Being lined up like soldiers in a row in a marina isn't exactly fun. The view is limited and its the same every day. After having cruised for months that will be even harder than it was last year. It's one of the nicest parts of this cruising life to look out the window each morning and there's something new to see.  Plus, we've noticed marinas tend to be windy.

There's no practical reason we couldn't spend the Winter out on the cut. We manage fine with power, water and waste disposal. We're lucky the boat has such a great spec.... well, maybe its not luck, we chose her for it.  We can easily go a week on a tank of water, the loo tank hasn't been pumped out for five weeks now (although that's the longest we've let it go so far and it's nowhere near full) and we have never run low on power.  We are always toasty warm. We keep the coal stove ticking over and run the central heating for an hour or two early morning.

Thoughts on this topic came to the fore after talking with Emma and Nick on nb Marpessa2. She said its some of the best days they've had when they're surrounded by snow and her favourite day was following the path of a working boat that had broken through the ice and left a path open behind it. It does sound lovely.  Everything sounds different when there's a blanket of snow and I can just imagine looking out the window to see the canal covered in snow.

We aren't used to these cold Winters and we don't want to risk being iced in. I like the luxury of not having to generate our own power for a few weeks and not having Mick talking about electricity (its his little obsession).  The electricity obsession seems to be a bit of a guy thing. We've met quite a few now.  Sometimes I think when we get home Mick will take to checking our electricity meter there too!

We've allowed in our budget for marina fees.... both over Winter and for a day or so each month. We just like to pause. They usually have enormous washing machines so you can pile in heaps of stuff in one load and there's nothing I like better than a spring clean.  Maybe that's my obsession.

But.... sometimes I think maybe we are missing out on a little bit of the potential adventure by not toughing out a Winter on the cut.  Here's what we're missing.... I had these photos from nb Epiphany in a post a couple of years ago. 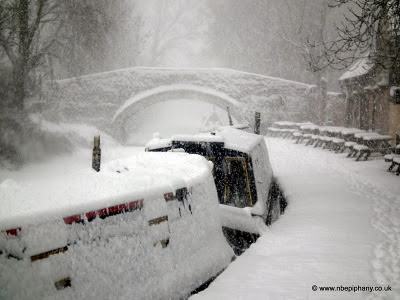 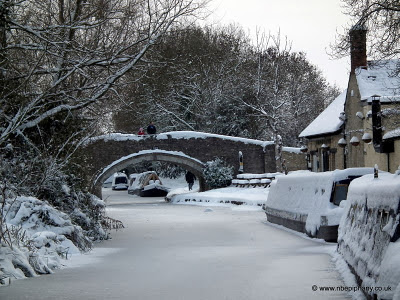 Last winter we were only iced in for a week in Birminham in Feb. Secret is to aim to be near services when the temp has been below freezing in the day for a few days. Nothing like winter cruising the light can be so lovely and it is so quiet ;)

Ooooh guys, how exciting that yot might stay out...will send you some pics of our icy experiences last year. Mick will be carefree and draining the batteries with fairy lights before you know it! x

Yes definitely missing out being in a marina - its just magical. We stepped away from our farm mooring last year and ended up getting iced in. It wasn't a problem as we didn't have shoreline anyway so were used to running the engine to charge etc And like you, a tank of water will last around 2 weeks. If the weather is coming in , its always known about few days before so as another commenter said, you could just get yourself near some services if you're worried about what or emptying the loo beforehand? Give it a go for a few weeks - youll love it and besides, what's the worst that can happen? It's not the Atlantic ;)

I knew I'd get a response to this topic! We're going to the marina tomorrow but we'll definitely get our more often than we did last year. We're hoping to have a couple of days out when the weather looks promising.
I'll look forward to reading the adventures of you brave ones.
Elly :)