Now, I thought this was Diane's family tradition or something (I'd never heard of them!) but it turns out to be far bigger than that.  I stumbled across this article from the Daily Mail and discovered England's gone mad for Onesies! 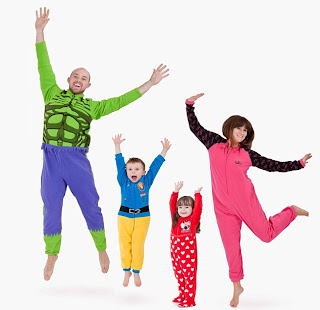 We've all gone crazy for onesies! Celebrities fuel trend for all-in-ones as Asda stockpiles ONE MILLION in time for Christmas

If you find the idea of a grown-up dressed up as an adult baby disturbing, steel yourself now, because the item predicted by supermarkets and high street stores alike to be the number one Christmas gift for 2012 is none other than the onesie.
Celebrities were early adopters of the trend, with the likes of Rihanna, Robbie Williams, Tulisa, One Direction and Tom Daley all stepping out in their own versions of the adult rompersuits.
Holly Willoughby appeared on This Morning wearing one, Keith Lemon stepped out in Asda's Incredible Hulk onesie and Amy Childs vajazzled a £60 velour all-in-one, 2,000 of which sold out on her website in two days.

Evidently millions have already bought one for themselves. George at Asda, who are predicting that onesies will be the number one Christmas gift this year, say that sales of onesies have soared by a staggering 606 per cent year on year, and the word 'onesie' is now the most searched-for term on their website.
Marks & Spencer and Debenhams have reported staggering sales results too, with M&S saying last month they would be producing an additional 10 styles of the onesie in time for Christmas, and Debenhams reporting a 155 per cent rise in sales in October compared to the previous month.

A spokesman said at the time they'd sold 2,075 units in just one week - and that was just the tip of the iceberg.
With Christmas now fast approaching, many more are expected to jump on the onesie bandwagon.
A poll on the George at Asda Facebook page revealed that 42 per cent of customers are planning to buy a onesie as a gift this year, and a third admit the ultra-forgiving onesie will be their outfit for Christmas day.

As a result, Asda say they have stockpiled one million onesies to meet demand, and have launched an online Onesie Shop for customers. There, shoppers can buy Sponge Bob Square Pants onesies, onesies in tiger print and dalmation print, a Fair Isle onesie inspired by the Burberry catwalk show - and that Incredible Hulk onesie as worn by Keith Lemon, which sales analysts at the store predict will sell out in 24 hours (no fighting in the aisles over the last one now please).

Fiona Lambert, George Brand Director said she predicted sales of onesies will go on soaring right up until the big day. 'Onesies are the must-have item for Christmas 2012,' she said. 'Each week at George we see sales soar higher than the week before which we are attributing to celebrity influence.

'Due to such high customer demand we have ordered in thousands of extra onesies and launched our dedicated online ‘Onesie Stop Shop’ to ensure our shoppers don’t miss out on the perfect outfit for a cosy Christmas morning, day and night for the whole family.'


Read more: http://www.dailymail.co.uk/femail/article-2236382/Celebrities-fuel-trend-onesies-Asda-stockpiles-ONE-MILLION-time-Christmas.html#ixzz2G992Fm6q
Posted by Elly and Mick at 20:17

OMG!! I must be getting ancient, we used to put the kids in them about 40 years ago, they were then called a babygrow, the first thing I knew about adult 'babygrows' was Noel Edmunds prancing about in one on 'deal or no deal a couple of weeks ago, still, like music I suppose, if you live long enough it will almost always come back into fashion eventually, maybe it is time beards come back into fashion, then I would look up-to-date again after 50 years of a hairy face.

Hi, Elly/Mick. They have been out for years around here mainly girls though. They take kids to school, drive cars, go down the street to the shops, change into them from work and so on. These are called pj,s though. Alan.