Boats on the move

We enjoyed our night on the island.  It was very peaceful and for the first time in a while we had no lights shining in the porthole during the night.

Yesterday, aside from the gaggle of boats waiting to come up at Evesham Lock, we passed just one narrowboat and late yesterday one cruiser came up through Wyre Lock.  We had the river to ourselves.  This morning there was a flurry of activity.  First came a large cruiser up through the lock on their own, then a pair of narrowboats who had waited patiently for the cruiser who took an inordinate amount of time about it.  No sooner had the narrowboats entered the lock and there were two more boats waiting below.  More in half an hour than the entire day yesterday.

A boat came in the opposite direction as the final lock of boats coming up were opening their gates.  We decided to head off and share the lock going down.  We had a look at yet another old mill as we exited the lock and we were on our way.

It was only a short hop to Pershore where we found fabulous moorings alongside the sports oval.  It's a very long length of moorings with good sturdy poles and a neat concrete edge.  As a bonus the bank here isn't quite so high so our view from the windows in unobscured.  There's a row of horse chestnut trees along these moorings.  We've had a couple of people tell us to put them on the window ledge to keep spiders away.  I'd be very happy if it were true... I hate spiders and they seem to be everywhere at the moment.  I had brought a few in while we were at Wyre Lock.  Also at Wyre Lock we collected a bag of little pine cones for the fire.  They'll make good kindling instead of paying for "sticks".  Mick rather resents having to pay for the sticks as we've always had them for free at home.  He'd bring home bags and bags of offcuts from work, supplying not only ourselves but our elderly neighbour too.

There's an Asda supermarket just beyond the football oval... very convenient.  We went to get some goodies for lunch and no sooner had we finished our lunch when nb Winton's Folly came chugging around the corner.
I settled down to work with a lovely outlook from the side hatch.  Next thing we knew a pair of dragon boats were launched onto the river for practice.  It was interesting to watch.  The blue boat rowers were obviously a team and rowed nicely in time.... shame they didn't bother to put the dragon head on the boat.... it was left on the ground beside the trailer.  The yellow boat had a larger crew and they all looked rather inexperienced.  They weren't in time and there were oars waving all over the place.  By the time they returned from their training session things had improved a bit.  The two boats had a little race back to their launching spot.

Janet... that's what was outside the window as I replied to your email! 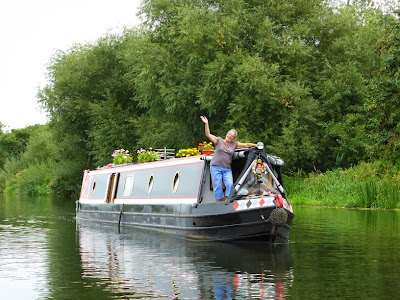 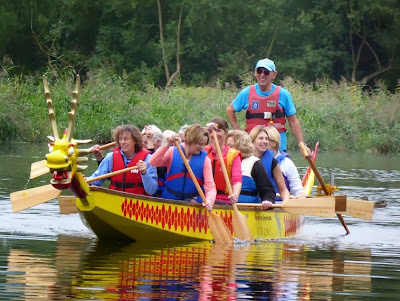 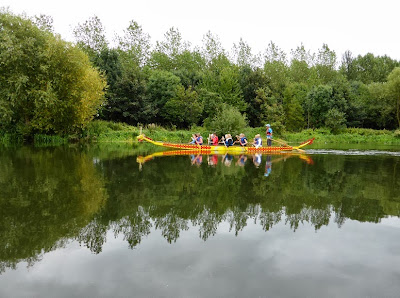 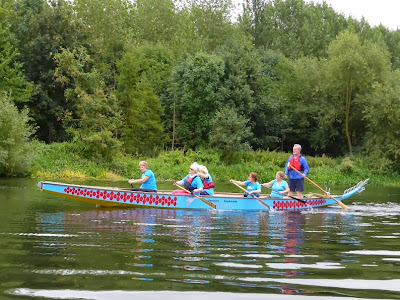 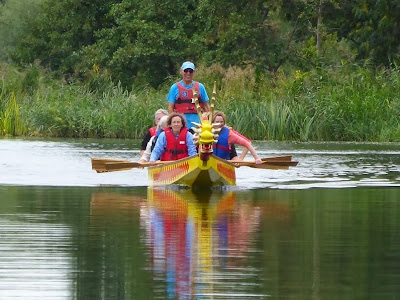 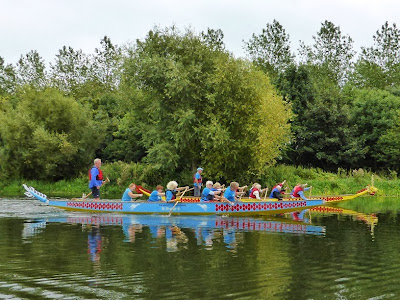