We set the alarm for 6am so we would be through the lock and into the basin in time for the hire boaters' departure.  As I filled the lock and waited for Mick to bring the boat around (it took a while because he had some sort of encounter with the bridge) I noticed another boat leave one of the pontoons and head off under the road bridge.  It was the very end mooring at present.

Usually a short boat could moor on the other side of the pontoon but there were three boats breasted up against the bank so there isn't enough pontoon left for a boat to moor there.  The boaters breasted up get off their boats and stand on a sign that says "No Double Mooring"!  I guess it doesn't apply to them because they are tripled up!!

We've had a bit of a grumble about the moorers in the basin over the weekend.  There are boats still here now that were here when we came through 5 days ago.  And, in the meantime we've paid 40 quid to do the right thing and moor up down on the river as the basin is 48 hour moorings and we knew we'd be here a few days waiting for nb Winton's Folly.  Who is the bunny then?!

We were all settled on the new mooring just as the hire boaters rang to say they were almost ready to go.  Mick went down and jumped on board and Barry got on the bow to fend off if necessary.  It was actually a lovely morning with blue sky and still waters (it didn't last long).  The breasted up boats were taking up some of the turning space in the basin but there was still enough room to wind the 70 footer.  Mick did admirably on a longer boat than he's used to and with no "girlie button"!

There was nowhere to get off again until the other side of the road bridge so he and Barry jumped off there after Barry did his Leonardo Dicaprio impersonation.  We waved the hirers off and headed back for a cooked breakfast.

We noticed there were some additional stalls over at the market today - an Italian section.  After another look at the market we had a browse around town again.  On returning, we saw a boat had slotted in beside us where someone had moved on.  There were several empty moorings now.  They had tied their bow rope to the mooring hook on the opposite side of the pontoon so the rope was right across the pontoon at about ankle height.  Honestly.... it isn't rocket science to imagine what will happen when the next spot gets filled.  In the flurry of activity in getting a long boat tied to a short pontoon I could just see someone going in the drink or taking a nasty fall.  It wasn't long after that another boat came under the bridge and were obviously looking to see if a mooring was available.  Mick pointed out the spot to them and they did an expert job of getting themselves there.  There's a lovely Scotsman onboard and he's wearing a kilt.  It's the first time we've seen that since arriving in England.  It reminds me of seeing a German fellow wearing lederhosen when I was in Germany.

I could stand it no longer so knocked on the window of the boat next door... they were all sitting right there having breakfast... and suggested they might like to tie to their own side of the pontoon to prevent the accident that was waiting to happen.   There was a bit of mumbling about the wonky mooring hook, and they were right about that, but they did come out and re-tie the boat.  They moved on again later in the day, reversing way too fast out of the mooring, and making a good attempt at taking our paintwork with them.

This afternoon a pair of Bywater hotel boats came into the basin.  I know they're nothing like old working boats but it still adds interest to see a "motor" and "butty".  What an expert job they did in the wind and how lucky were they to find a pair of moorings between pontoons.  They came through the narrow bridge hole, one fellow jumped on the roof of the motor with the tow rope in hand to drag the butty boat alongside.  With precision showing plenty of practice, they expertly hooked the boats together just as they came alongside each other and chugged along to the mooring.  There was no faffing about, no yelling or arm waving, they just tootled into the mooring.  Awesome!  I was so enthralled watching them that I didn't even think to take a photo.

It's been a while since we've had a day so windy.  There is a definite chill in the air too.  We've talked of lighting the fire once the flue has had a clean out.  We see a couple of chimney's smoking on nearby boats.  I'm actually looking forward to the cosiness of the fire going.  It's time to put our double glazing back up too.

Two of the breasted up boats have gone today so our view is expanded.  It will still take a short boat to moor on the other side of our jetty.  Meanwhile, it's lovely to be able to look out at the market. 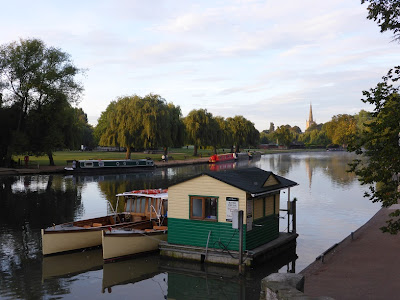 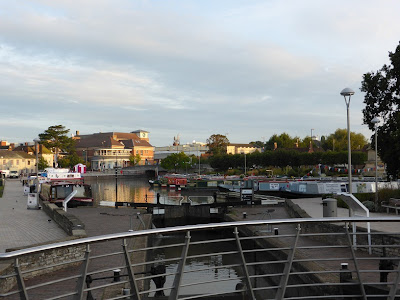 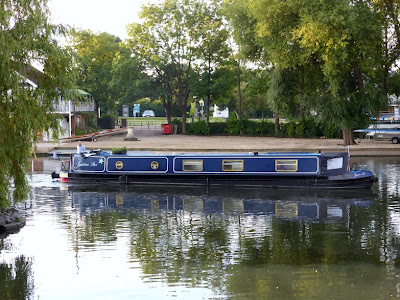 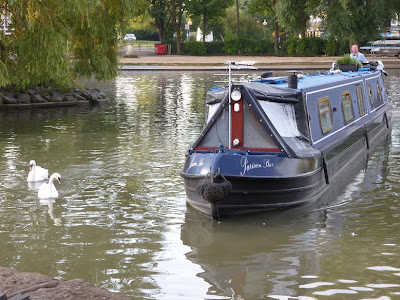 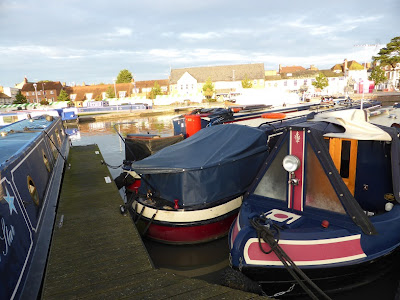 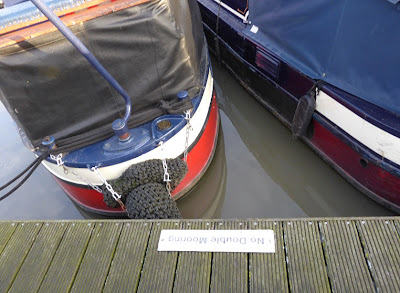 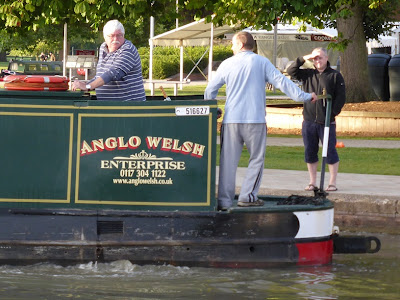 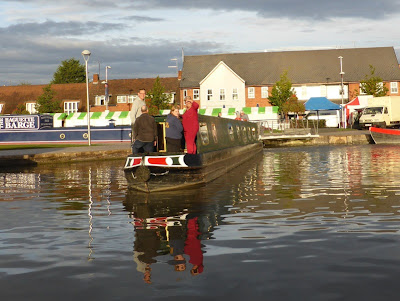 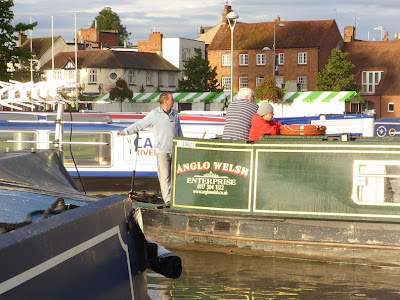 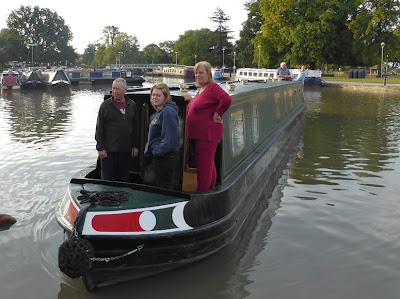 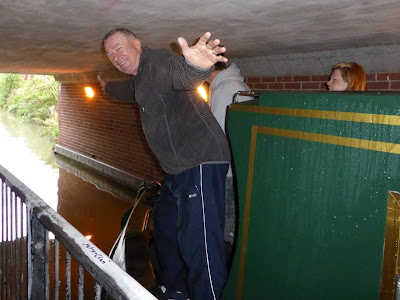 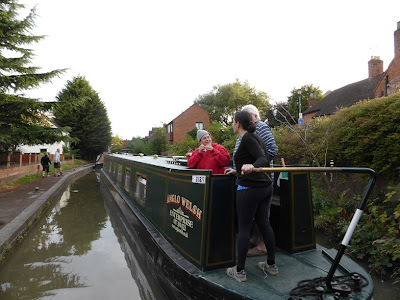 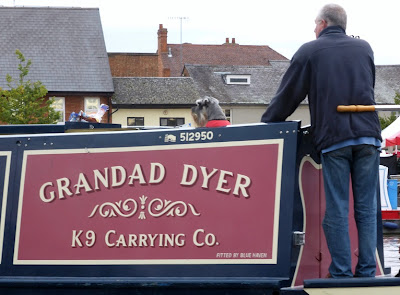 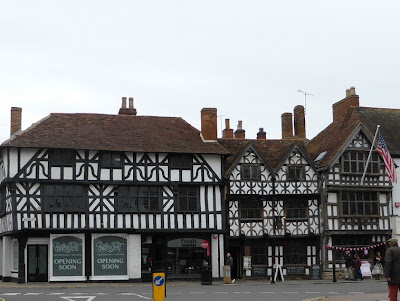 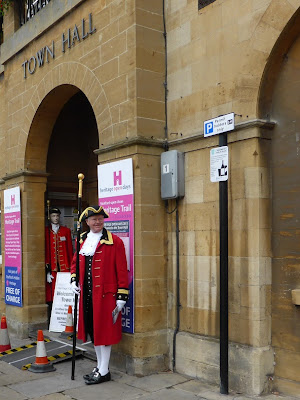 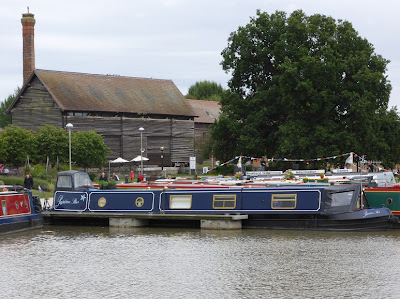 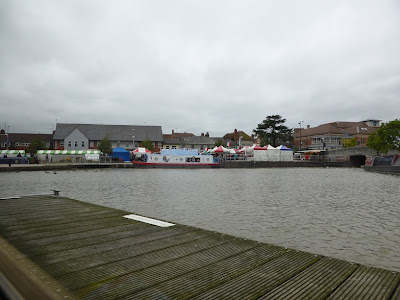 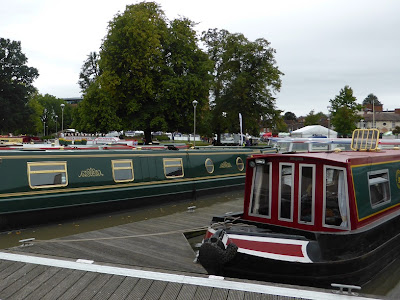