While in Birmingham I was on a mission to take photos of the moorings available.  It's so hard to know which way to turn when you arrive when you have no idea what the moorings are going to be like.  We'd heard tales of woe and being rather cautious moorers we were grateful for blog readers who answered my plea for help!  I'd definitely recommend arriving before lunchtime during busy periods like long weekends.  We saw many boats cruising round and up and back looking for somewhere to moor safely.  But really, arriving at 7pm on a long weekend can't be a good idea!

If anybody has comments or corrections, do let me know and I'll update this blog entry.

Here is a map of most of the mooring sites and how long you can moor there.  These signs are dotted around the mooring areas. My photos show the moorings beginning from the left of the map below. 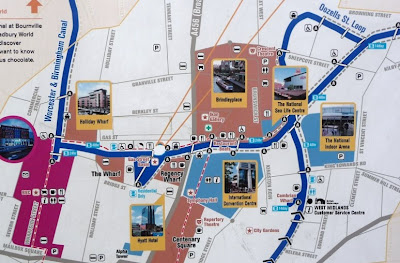 There was a couple of moorings at "Holiday Wharf" on either side of a water point, plus one just before them with a slightly higher edging.  These aren't marked on this map and there was no sign saying how long you could stay - just a little bollard picture. There was a CCTV camera on a building opposite so it looked safe enough... and very convenient for water.  First photo below taken from the bridge at the junction looking down the Worcester & Birmingham Canal.  The second photo taken looking back towards the junction - water tap just visible at about centre of the second photo.  You can see the single moored boat in both the first two photos- it's on the mooring where the bank is higher.  The third photo was taken as we cruised out of Birmingham.  Now there were boats on both the moorings either side of the water point.

Beyond the bridge there was one boat moored (just visible in the distance in the first photo below).  There is graffiti all along the fence so there obviously isn't CCTV and I wouldn't want to moor there.  The fourth photo below was as we cruised out of the city. 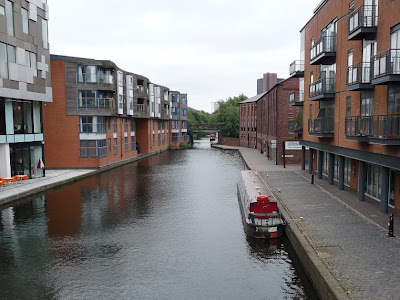 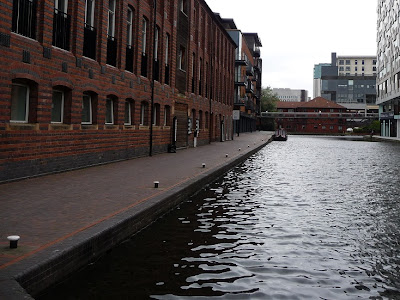 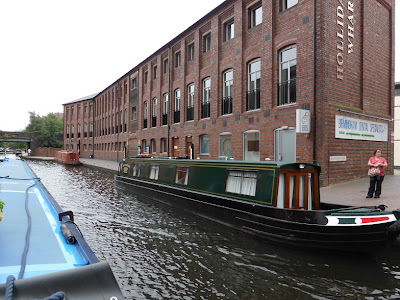 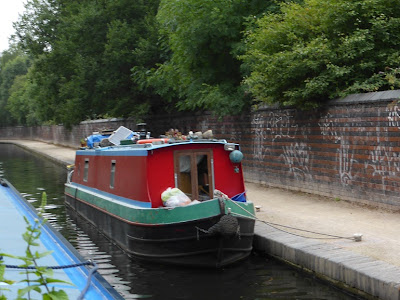 Then, around the corner between the junction and "The Wharf".  This had been empty but the next day there were a few boats.  I couldn't see a CCTV camera so I'm not sure how good it would be overnight.  It felt a little desolate when we walked by when it was empty but when I took the first two photos there was a Canal and River Trust tent, moored boats and lots of people walking about.  It felt totally different.  First photo is looking towards the junction, the second photo taken from the bridge at the junction.  The third and fourth photos were taken as we left the city and there weren't so many boats.  It had a bit of a deserted feel again.  Most of the buildings along these moorings are empty so that doesn't help.  Gas St Basin is just beyond these moorings. 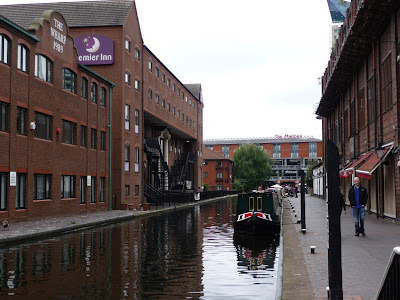 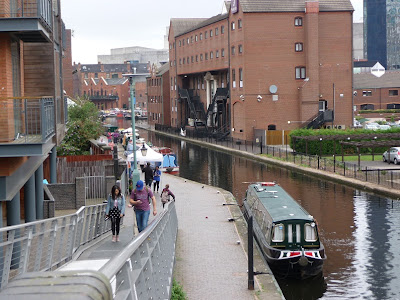 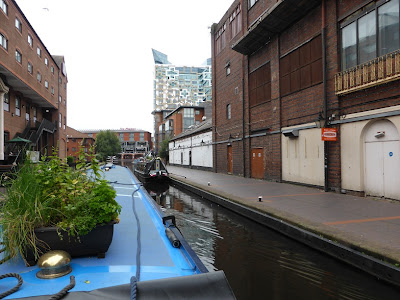 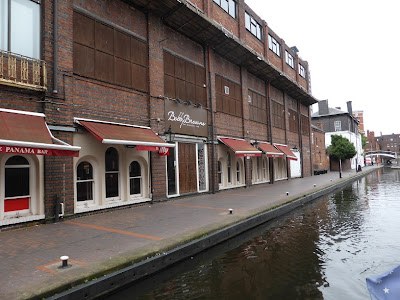 Gas St Basin.  Right in the pointy end of the basin there is a single 24hr mooring on each side.  We only saw a boat moored there a couple of times.  The map doesn't show them as public moorings but there are signs beside them saying 24hrs. 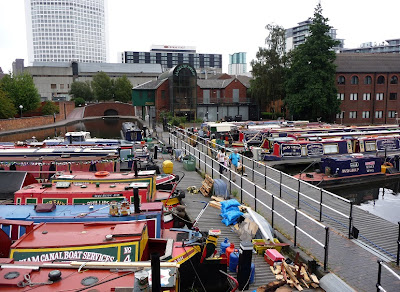 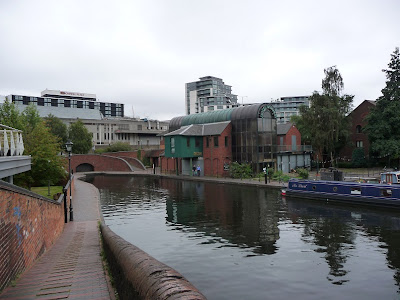 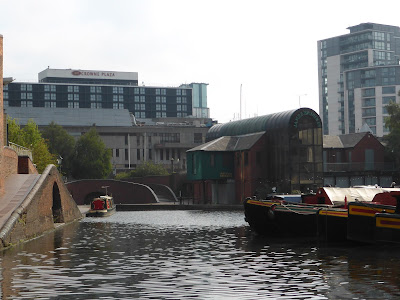 The map shows a 24hr mooring at the end of Brunswick St.  This would be a prime spot location-wise but we've not actually seen a boat moored there.  Perhaps it would be noisy with bars and restaurants around?  It's on the right of the first photo, under the grey bridge. 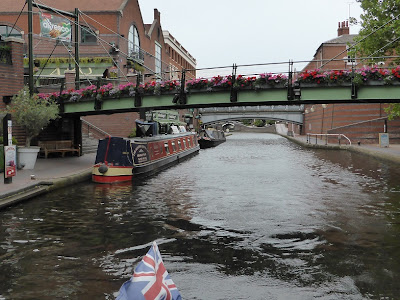 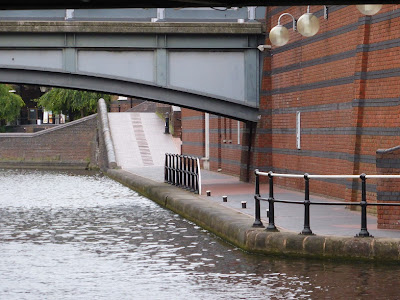 Cambrian Wharf shows 14 day moorings on the map - it's just beside the top lock. We thought they must be pay moorings but later discovered they were 14 day visitor moorings.  There is a sign saying 14 days against the bank beside the lock but the pontoons are also 14 days.  The pontoons have a fence around them but it's so low you can just climb over it.  Not once did I see anybody other than a boat on the pontoons.

There is a pub/bar called Flappers against one side and it has a balcony overlooking the moorings.  We thought it mightn't be wise to moor on the very end mooring right beneath the balcony.  I watched one fellow tip the remains of his beer over the edge of the balcony into the water.  A boat did come in to moor there though without mishap.  We were there over a weekend and it did get noisier on the Friday and Saturday nights but it didn't go on too late and we weren't overly bothered by it.  We moored there happily enough for a few days and actually enjoyed watching the comings and goings.  We sometimes had a good view of the lock (if there was no boat moored beside the lock) and could watch boats winding in front of us.

1. Looking into the wharf area - the top lock is on the left, the bar is on the right behind the hoist
2. From the very back corner of the wharf looking towards where photo 1 was taken
3. Our mooring - second in from Flappers 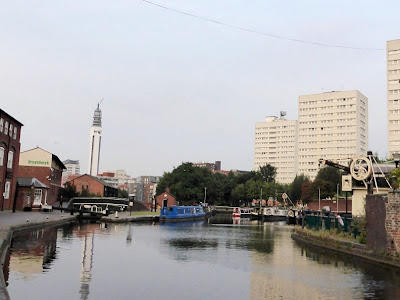 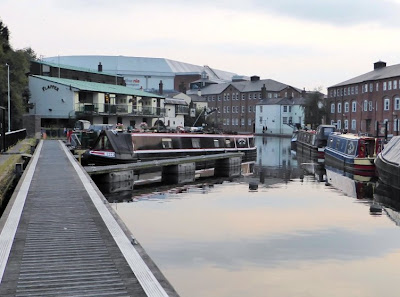 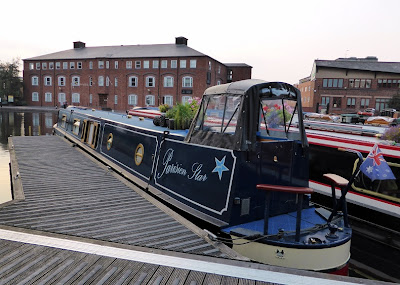 Beside the National Indoor Arena there is a couple of 48hr moorings.  There was a huge project underway beside them so right now they don't look too appealing and I'm guessing that's why they were empty.  Couldn't see a CCTV camera either.  When we cruised by later there was a hire boat there. 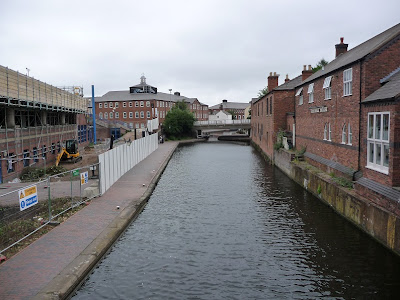 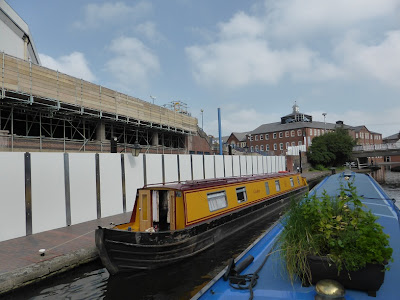 At the end of Oozells Loop (underneath the National Sealife Centre picture on the map) there is mooring on the left as you enter.  The rest of the loop is private moorings. There is space for 3 or 4 boats. 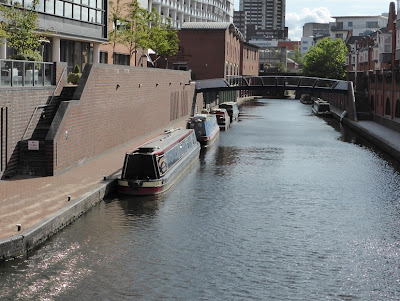 The 48hr mooring logo to the right of the Sealife picture on the map is where we moored.  It's a good long stretch of mooring.  There could be 5/6 boats on the Sealife side of the canal and 6 on the other.  The Sealife side would be a better choice as there are less pedestrians.  We were right beside a gate for the walkway leading to the road and bridge.  It was busy but fine.... just lots of folk wanting to peer in our windows.... and some tourists clambouring on somebody's boat to have their photo taken.

First photo taken from Sheepcote Rd bridge, the second taken from the bridge you see in the distance in photo one. 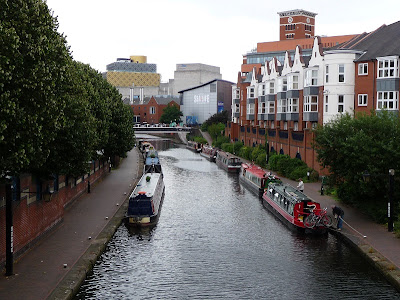 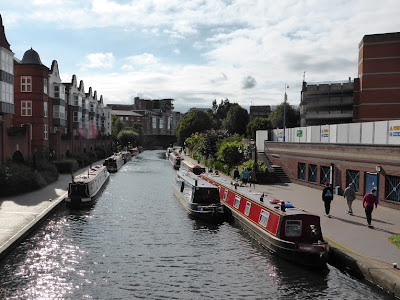 Finally, there are 14 day moorings beyond this.... on the other side of the Sheepcote Rd bridge.  We had not a hope of getting in there.  The photo is taken from the bridge looking off to the right of the map.  The boat furthest on the far right had an overstay mooring notice on it and the next boats were all moored with gaps between.  We could otherwise have moored in there but 3 boats would have needed to move.  Not likely!

I had a comment on the blog saying not to use these moorings as they'd had mooring ropes cut while moored there and the police were called.  I think without CCTV it wouldn't be a good choice. 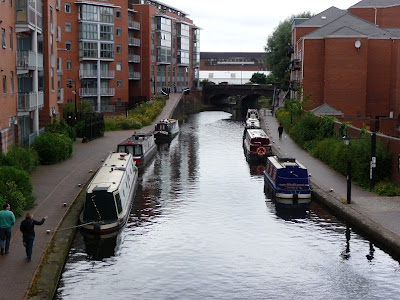 There was one "disabled" mooring beside the water point near Cambrian Wharf.
Posted by Elly and Mick at 03:45