Vertigo and on to Stratford

Yesterday was a bit of a write off.  I had a giddy spell when I got out of bed - something I've had in the past called "benign positional vertigo".  This time I also had trouble with nausea.  Such a nuisance!  My brother has had the same thing and was totally incapacitated.  It wasn't as bad as that but nausea is so horrible.  I straight away started doing the exercises the doctor gave me last time to resolve the problem.  For the rest of the day I kept having the problem if I moved my head quickly or got up too quickly.

It was raining when we got up and the long row of moored boats were disappearing fast... leaving us almost alone except for one other boat.  The forecast predicted the rain would clear in the afternoon.  Mick had wanted to move on but with lots of locks ahead we decided it wasn't a good idea.  I tried to do a bit of work and Mick went off with his windlass to offer some assistance at the locks.  He helped a couple of boats through the flight and they were grateful recipients of his voluntary labour.

This morning our 48 hours was up but my vertigo wasn't!  We ahm'd and ah'd and eventually decided to go.  Mick was insistent he could manage the locks and the boat himself and a passing boat told us there was a volunteer lockie in attendance.

I did think I might be able to steer the boat but that idea went out the window at the very first lock.  I got the boat away from the bank and the first time I glanced down to line up the boat with the lock I was in trouble.  I called out to Mick and moved the boat back to the canalside.  So now the only thing I could do was to sit on my stool and keep the boat away from the cill!

At the next lock we found the lock-keeper.  When he heard our dilemma he said he'd come all the way down the flight with us.  It was such a relief.  As it was Mick still had to climb down the slippery lock ladders to get back on the boat each time.... something we try hard to avoid doing but this time there was no choice.

We thanked the lockie at the bottom of the lock flight and moved on to fill our water tank.  I had been doing my exercises and was finally starting to feel a bit better.  Our guide book showed a couple of moorings not much further along but there really wasn't anywhere that we wanted to or were able to moor.  We ended up doing a few more locks (by the last couple I was able to steer) and found the only place available to moor was right in the basin.

Approaching the basin from the Stratford Canal there is an extremely low road bridge.... tv aerial down again.... and out the other side I could see a heap of curious faces peering in awaiting our approach.  It was windy and difficult to see if there were any pontoons free.  One of the boats Mick had helped down the locks spotted us hovering and waved furiously to indicate there was a pontoon vacant.  It's much easier for us to reverse into very short pontoons so we can get on and off the boat at the stern which is our preference.  This would mean winding in the middle of the basin in the wind.  As Mick got to about halfway round the fellow awaiting our arrival thought he had mis-judged which pontoon to make for.  He raised his eyebrows when we called out that we'd reverse in.  Thank goodness for the bow thruster or it would have been a difficult thing but as it turned out all went well.  Such an audience we had too so Mick was relieved.

It was near on 2pm and the fridge was bare.  As we had now passed beyond the large supermarkets we decided to have lunch at a pub and worry about the shopping tomorrow.  We tried the Red Lion and had a nice lunch as our main meal of the day.

After lunch we went to check out the "Information Boat" to get details of fees payable on the Avon and moorings etc.  We also look out on a "restaurant boat", and "ice cream boat", a "baguette boat".

When we walked onto the bridge to watch the lock... along with dozens of gongoozlers... we spied a pair of tiny narrowboats that we've moored before or after for near on a week.  We had spied a NZ flag but not sighted the owners so were glad to have a chat with them today.  They were two NZ sisters who each owned one little boat.  They store them on land the rest of the year and come over each year to cruise a little and spend some time in France.  Wonderful.

Barry and Carol are on the move again today.  Hopefully they'll catch us up in the next few days.  There's 53 locks between us and them! 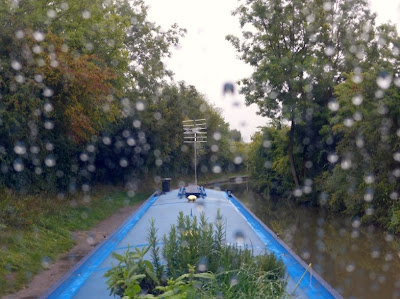 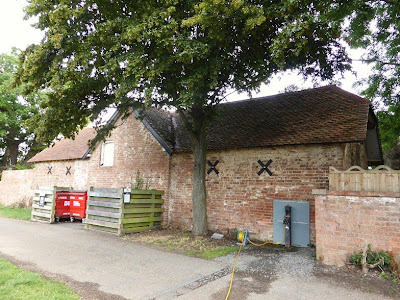 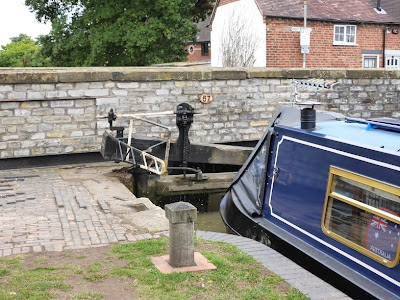 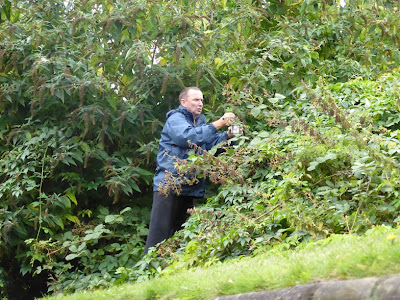 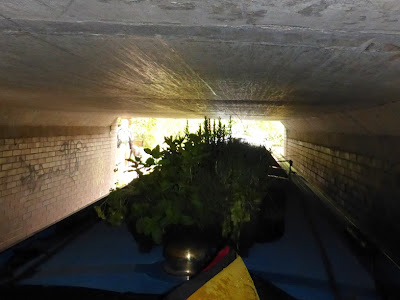 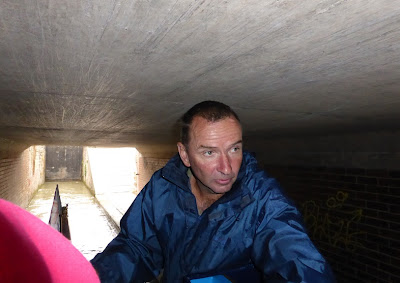 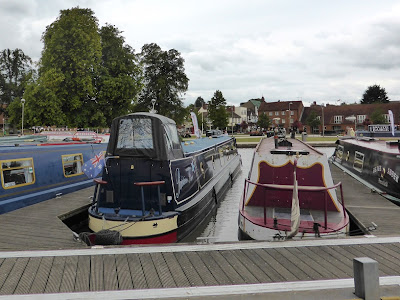 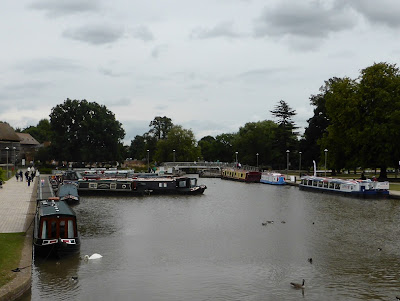 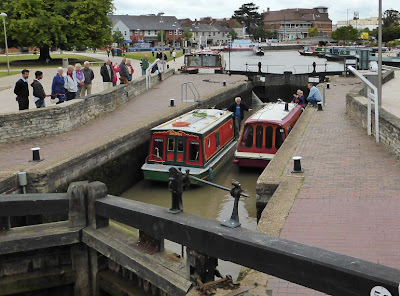 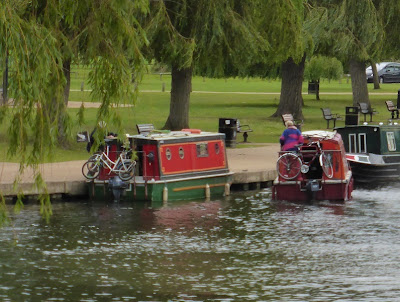 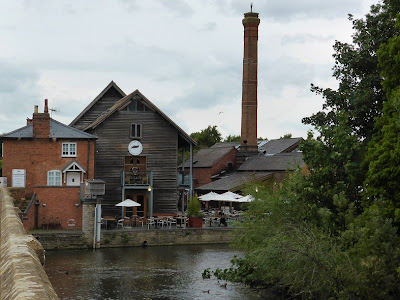 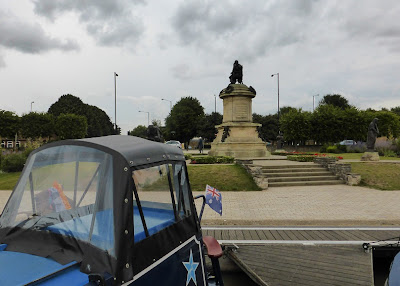 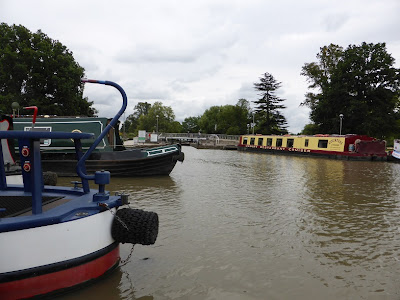 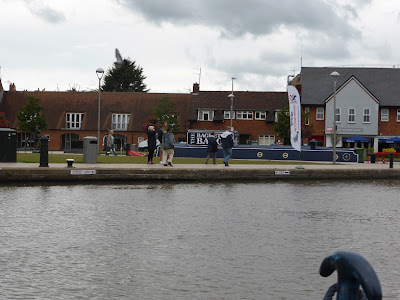 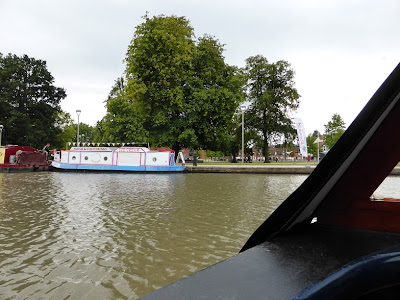 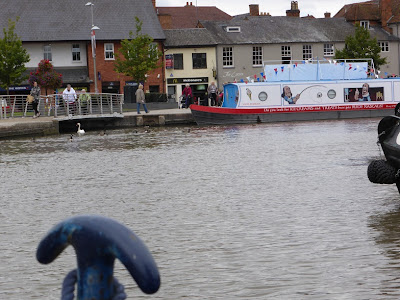 Hi Guys
I help Elaine at every lock if there is no help, I have been up and down the ladders hundreds of times, main thing is don't rush and have a real good pair of boat shoes, I have a pair of Burke yachting shoes, they give great grip on any surface.
Paul xx

Hi Paul,
I know you regularly use those ladders but I hate them! Slippery darn things they are. And Mick will ALWAYS get lock slime on his clothes. An appropriate pair of shoes would certainly help but for a such a short time we figure it's not worth the outlay. So.... we avoid the ladders when we can. Other than maybe twice before on a single ladder, this is the first flight of locks that we've been forced to use the ladders every time. Hopefully not again. :)
Elly

Oh the memories of Stratford, it was the turn round on my 1st ever canal holiday in 1976 may have been 74. Great times.
I'll have to dig out some photo's! we went from Upton-on-Severn to Stratford and back actually on up the Avon until we grounded a mile or so beyond the head of navigation signs!
I'll look forward to the rest on down the river.