Yesterday was windy... today was windier.  We had no neighbour on the other side either for much of the day and wind was belting us about.  We have only the stern line and centre tied which isn't ideal.  But, with a short pontoon and only 3 mooring hooks there isn't much choice.  At one point the wind was so strong that it was actually tipping the boat sideways.  The centre rope, being attached to the roof of the boat was pulling the boat over on a rather alarming angle.

A boat came into the vacant space beside us and the effect of the wind became more obvious.  Now we were being shoved against the boat beside us.  We couldn't let that go on all night.  We put down our tyre fender and Mick re-tied the centre line which improved things a bit but it was still rougher than we'd be able to sleep through.  Eventually Mick went out and put a roof screw through the decking and tied a short rope through the eyelet along the gunwale.  It was an instant success although probably not the "right" thing to do. 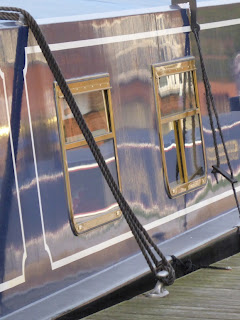 There was rain a lot of the day too.  Between downpours we went shopping and later Mick walked all the way to Morrisons because it's the only supermarket we've found selling tomato juice!  We got chatting to a Melbourne couple who came onboard for a look at the boat.

Earlier in the day we had a boaters meeting with the Winton's Folly crew.  The weather forecast for tomorrow is not looking good so we may defer our start on the river Avon until Wednesday.  With Barry and Carol tackling the task of swapping over Summer and Winter clothing I decided at 4pm that we should do the same.  It's such a crappy job trying to sort out "stuff" on a boat.  There's so little space and it ends in absolute chaos.  I emptied the wardrobe and drawers, pulled the dinette apart to get to the suitcase of Winter clothing.  Eventually we ended up with a huge pile of Summer things and more to go to the charity shop.  We won't be having another Summer here and I'm not dragging them all home again.  We made sure to bring clothes that we'd be happy to dump at the end.  It's great to have that task done.  Tomorrow I'll sort out the cupboards in the living room.

Mick got another job out the way today.  He brushed out the flue on the solid fuel stove.  In true Mick fashion he did the job wearing a light blue sweat shirt.  It's fit for the bin now!
Posted by Elly and Mick at 05:23