A day in port - Kidlington

We decided we liked it here so we'd stay another night... we caught up on some chores... I finally sorted out a software update for work... it was a good day.  It was also quite a warm day.  It seems we're in for a 2 week heatwave.  We're not too keen on that idea, we can get heatwaves at home!

Mick spent a bit of time at the lock, helping boats through.  His help wasn't always appreciated!  One boatload took offense at him implying they weren't capable or something.  He came back looking rather deflated after that.

He had a chat with one of the couples going through the lock on their boat.  We'd seen them several times on our journey down the Thames.  They told Mick they disliked the busyness of the river and the crowds so much that they'd just got off as quick as they could and they would give their license to a passing boater.  They'd bought a month long license and only used 2 weeks.  What a shame they didn't enjoy it.  We don't like crowds either but it was still an enjoyable journey for us.

A youngish couple really appreciated the assistance.  They were on their first day, at their first lock on their boat.  They turned off their engine in the lock and tied it up bow and stern.  Mick cautiously said while they were chatting that they really needn't do all that in a narrow lock.

All the other boats that moored here last night moved on this morning except for that one that was already here when we arrived.  The lady headed off with a collapsible pet carrier.  It turns out their cat went missing a month ago and they'd just had a phone call from a marina saying they'd found it inside a moored boat.  The cat had climbed in through an open window and had been unable to get out.  Lucky they found him. 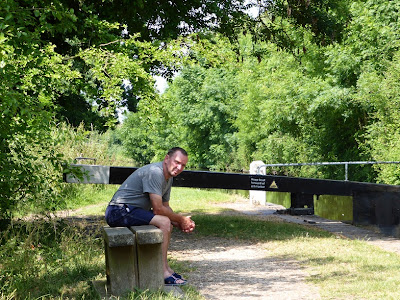