Today we planned to leave early.  The reality wasn’t quite as early as we planned but we were on the move not much after 8am.  We saw a pair of donkeys waiting patiently at a gate for their breakfast.  Their owner was walking towards them with 2 buckets in hand. 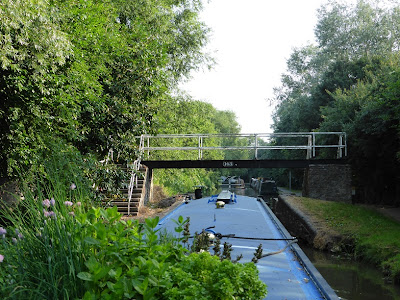 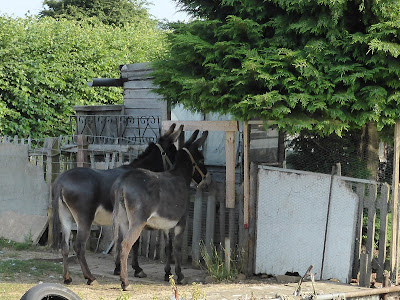 We had a few locks to do as we wound our way through lovely countryside.  We had a couple of boats ahead of us so every lock was against us.  We seem to get the same scenario over and over.  We pull in behind the boat or two ahead of us waiting for the lock.  One of us goes ahead to the lock and helps out.  Today we’ve not had a single boat coming down between us and the boat ahead so we tell the crew of the boat ahead of us to jump onboard and we’ll close the gate for them.  By now another boat is waiting down on the lock landing behind us.  The crew of that boat will sit on their boat to wait.  We’ll close the gate for the boat just gone, work the lock for ourselves, look to see if any crew members are coming from the boat behind us…. which today has been “no” on every occasion.  We exit the lock, close the gate behind us, get back on the boat and by about then a crew member from the boat behind will appear to open the paddles at their end.  Why don’t people help each other out?? 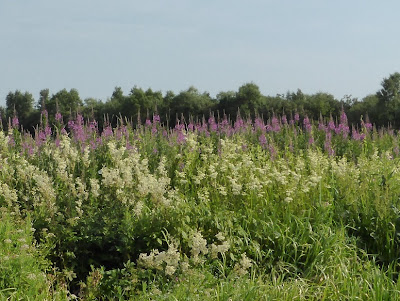 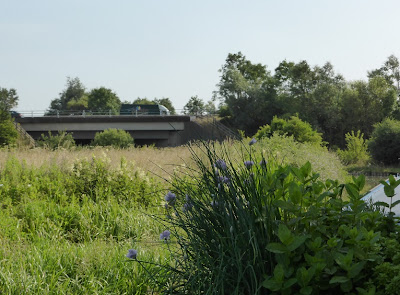 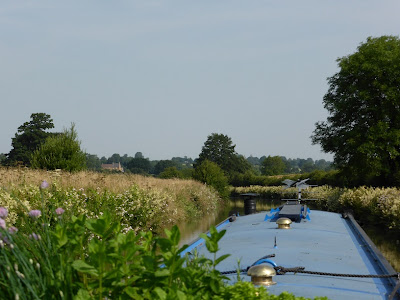 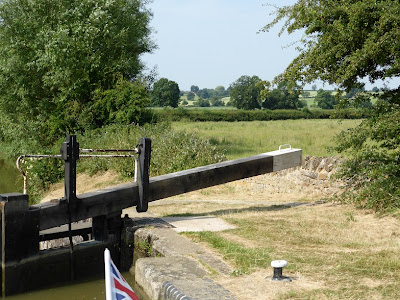 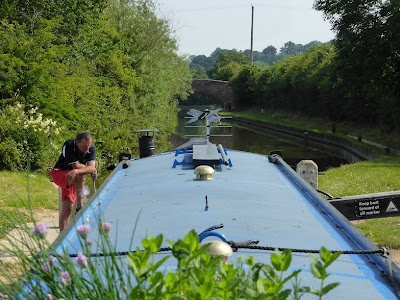 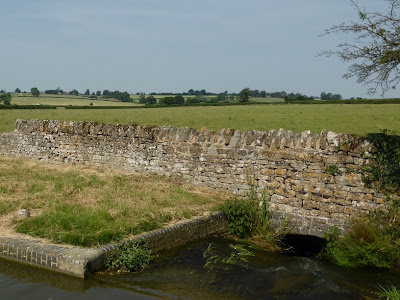 It was another very warm day and by the time we reached Cropredy we had our newly repaired golf umbrella up.  We stopped at the rather awkward water point to fill with water.  The landing is a bit short and has a bend in it.  There’s a bridge at one end and a winding hole at the other.  We watched a hire boat have a hard time of it getting in there as we pulled away.  Just beyond the bridge the boat in front of us moored up.  We had a look at the sign and sure enough it was a 48hr mooring but only big enough for one boat.  There’s a narrowing just after where perhaps there was once a bridge and much to our delight there was mooring just after that and before the lock landing.  It’s a pretty spot with trees on both sides.  Nice to have some morning and some late afternoon shade.   We very soon had a neighbour who just managed to squeeze in behind us.  It’s always a treat to have a mooring in a village or town where one end will be open.  As we’re first before the lock landing we only get boats there waiting for the lock.  Perfect. 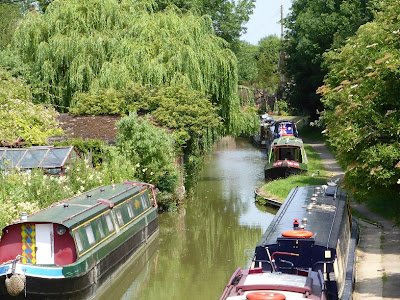 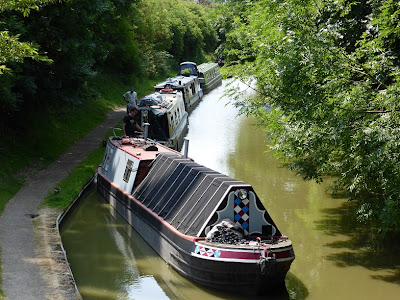 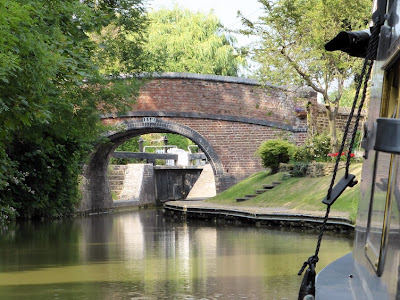 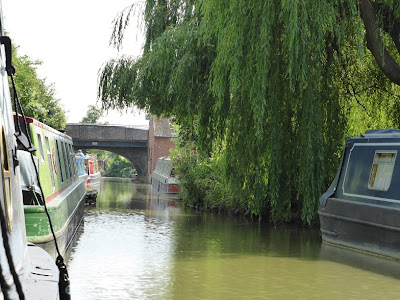 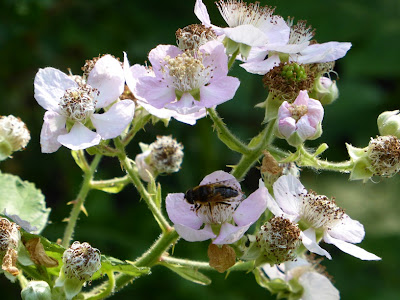 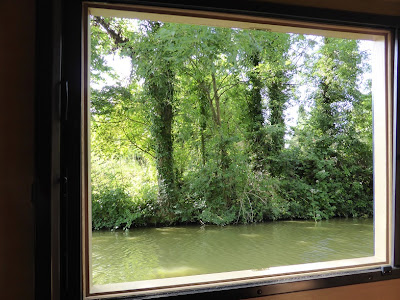 We had a good walk around the village which has plenty of lovely thatched cottages.  There is even a small antique store in Cropredy.  On the way we checked out the two pubs to choose one for dinner tonight.  Our pick was the Brasenose.  The owner was a chatty fellow who delighted in telling us that he lived and taught in Leongatha in Victoria for a time many years ago.  He proudly showed us that he had a sketched map of Melbourne on the wall.

At the lock there was another very nice lock cottage and then another cottage with an impressive vegetable garden.  Tomorrow we’ll walk further along to check out the new Cropredy Marina which is yet to be filled with water.  We heard that they were granted permission for the marina but not for a store of any kind.  This was to protect the little village store.  We did check out the store but it was so hot in there we just looked in and went straight out again! 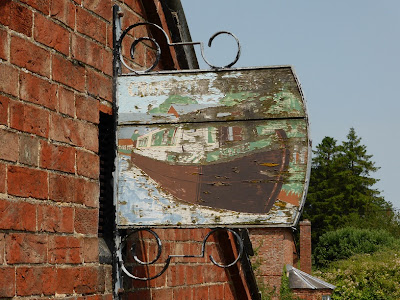 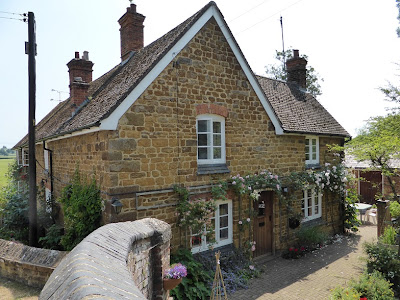 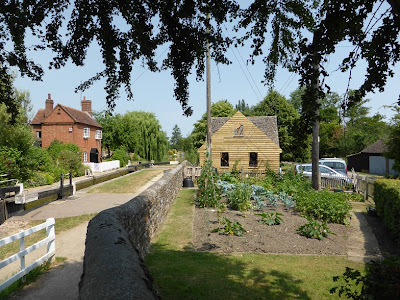 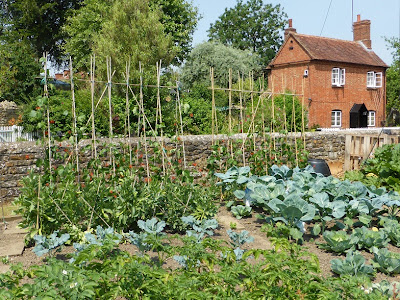 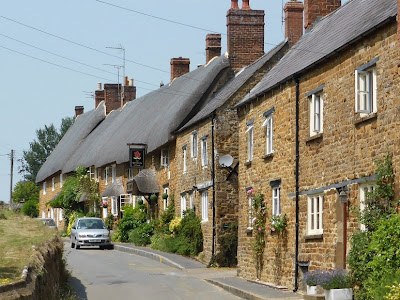 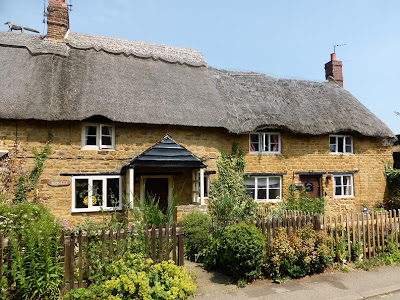 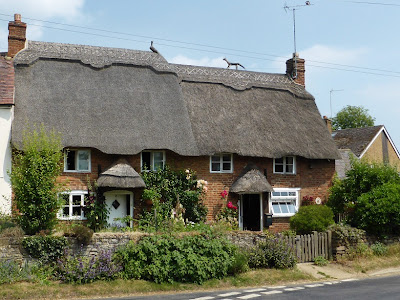 Also, just beside us, but accessed from the road on the other side is “Cropredy Lock Garden”.  It’s a long and narrow grassed strip with some shade trees, a garden seat or two, and a wooden outdoor picnic table and seats.  We’ll have to make use of that while we’re here. 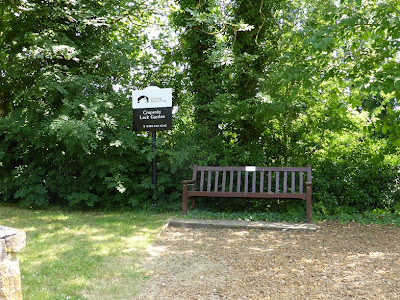 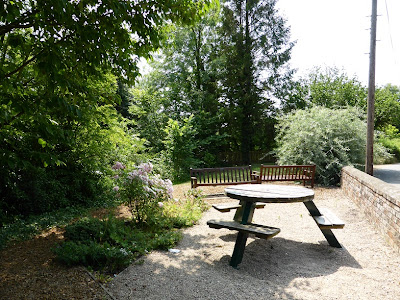 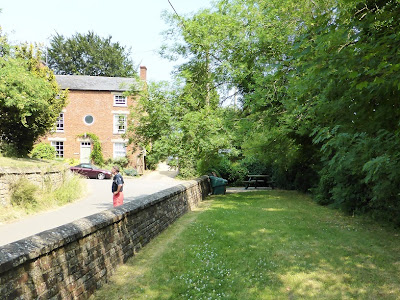 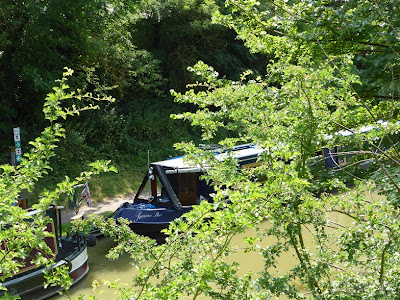 I decided we had to put clean sheets on the bed today so I stripped it this morning and washed them on the way to Cropredy.  At one of the locks I ducked inside while Mick was up at the lock with the boaters ahead of us, and hung the sheets between the saloon windows as we usually do.  By the time we were moored up at Cropredy near on midday the sheets were dry.  Excellent!  Here’s Mick sitting between them trying to tune the tv.  That was a waste of time.  No tv reception, almost no phone reception, and no internet signal.  I took the “goggle” with me on our walk and found that I could get a weak signal sitting on a seat beneath the trees on a little road island outside the pub.  So that’s where I’m sitting to publish this blog entry! 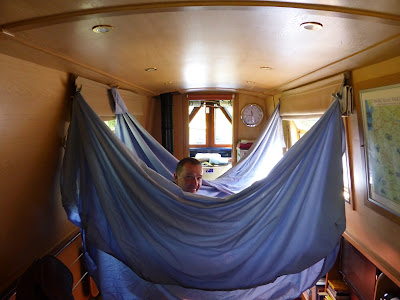 It was such a lovely afternoon.  We’ve enjoyed watching the boats back and forth through the locks.  Mick spent some time hanging out the side hatch supervising proceedings.  He said he was back seat driving.  I must admit it’s a whole different story watching narrowboat traffic jams when you’re moored up.  One hire boat had a tough time trying to hover in the middle of the canal to wait for the lock so we called out through the window to drift across and hold onto our boat while they waited.  We had a brief chat with them while we waited.

We enjoyed our dinner at the pub.  They had a couple of tables in the shade and cool breeze at the front.  It was a pleasant place to watch the world go by…. mainly locals coming home from work. 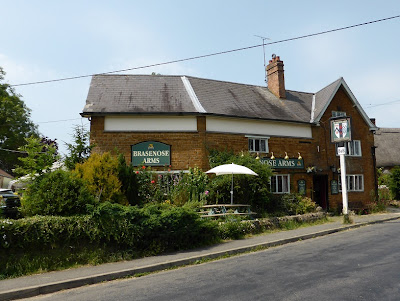 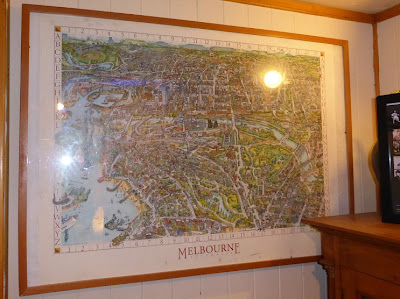 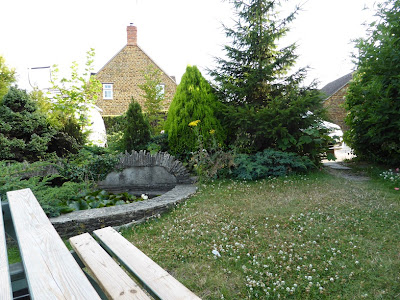 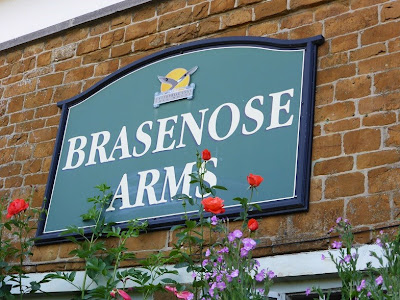 It’s been the sort of day we always imagined while we waited all that time to realize our dream.

For me, part of the fun of boating, is to help fellow boaters at locks and spend the time gassing and putting the world to rights, sorry gaining and passing on valuable information.

You made a wise choice to eat at the Brasenose Arms. When we were in Cropredy earlier in the year we made the mistake of eating at the Red Lion. We abandoned the place after our indifferent first course and moved around to the Brasenose for dessert!

Tony, we agree! What interesting people we've met this way.

Mike, we checked out the menus and made our choice. Good decision it seems.