We had arranged last night with the crew of nb Winton's Folly that we would meet them at Wallingford.  They had been there by bus yesterday and said there were some fab antique stores.  They figured if they gave us and hour or so head start we could have a look at the antique stores before they got there and we'd all move on again after lunch.

At 8.30am we were almost ready to go and looked out to see Barry and Carol outside their boat.  They were going to leave with us!  Two days running and they've been off early.  We were at the Goring Lock before the lock keeper started duty so had to work it ourselves.  Oh, my goodness!  It wasn't the lock mechanism that was a problem.... the instructions were easy to read.  But... all four of us stood on the lock sides trying to work out how to hold the ropes of the boat while someone went to work the lock.  We had no idea if it was a lock with side sluices or what sort of force there would be.  Mick was doing his little "hot shoe shuffle" and getting agitated about it all.  Barry.... seeing Mick was doing the flapping today.... decided to stay calm.  It's only ever one or the other of them... never both together... thank goodness.  Eventually we got sorted out and Carol went to operate the lock.  The lock keeper had arrived and shut himself in his little hut but I'm sure he was peeking out having a laugh. 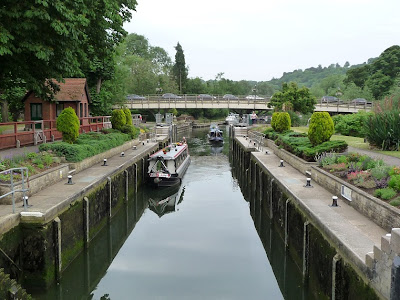 Soon after came Cleeve Lock where we did a water top up.  Then we were on our way. 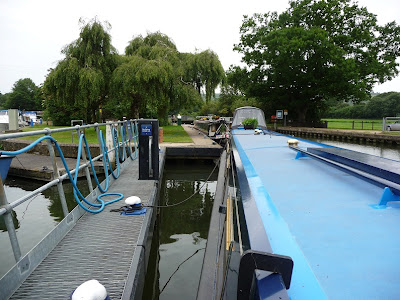 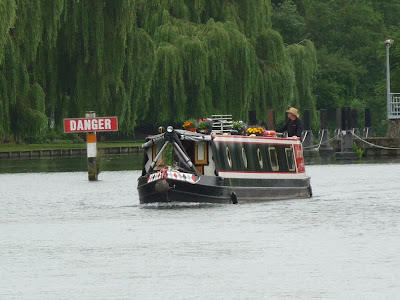 Next stop was Wallingford.  I wish now we'd taken some pics when we arrived but I thought I'd do it later and then it was raining. Never mind.  There are plenty of moorings on both sides of the river after the bridge.  We moored on the left but the wharf is really high..... obviously designed for much larger boats than us.  We did manage to get the last spot where it is slightly lower but we had to climb on our taff seats to get off the boat.  nb Winton's Folly came in behind us and had their bow on the lower section at least.  It's a lovely spot with a single lane main street that has traffic lights either end.  So quaint.  We thoroughly enjoyed browsing the antique stores and then a grocery top up in the biggest Waitrose I've seen so far.  It's right in the centre of town.  It was raining when we came out of the supermarket so we hurried back in the rain with our grocery bags.  We had a quick lunch, I did a bit of work, and Mick went off in search of the paint store.  The Thames hasn't been a good place for painting the gunwale on the other side of the boat - we're always way too low below the bank.  With Oxford in sight he's hoping for a better opportunity.

The rain eased and we took off again, intending to moor up at Little Wittenham.  We passed the now familiar sights of grand riverside properties and boat houses.  There were also several WW2 pill boxes along the way.  When we reached Little Wittenham we decided to push on a bit further. We had moorings marked in our book at Clifton Hampden on both sides after the bridge.  When we arrived we both had an attempt at mooring up on the right.  We ended up with Mick on the bank with the centre rope.... me on the boat.... and we couldn't get the boat in anywhere near close enough.  In fact, we could barely get Mick back on the boat!  We thought we'd go back behind the tree and breast up with nb Winton's Folly but it looked like Barry and Carol were having the same problem so we all gave up.

For the first time since being on the Thames we turned the boat and headed back the way we came.  Just the other side of the bridge we'd seen a single mooring so we headed for that.  Another "turn around" to be facing the right way again and we got into the spot.  Our stern was out from the bank a little but that wasn't a problem.  nb Winton's Folly were struggling with the wind so Mick yelled out for them to come in beside us.  Only problem was he couldn't get a pin in the ground.  He kept hitting a rock.  By then Carol was peering across from their bow with rope in hand.  She threw it to Mick but it fell well short.  Another attempt and same result.  Barry was trying to quickly tie up to our stern and their bow was being blown further and further out.  It was rather comical from the bank but Carol was flustered and Barry was grumpy so it was no time to laugh.  When I saw Barry doing his "arm flinging" I yelled out to him to go around again and make another approach.  That would give us time to resolve the pin problem.  The second time was far more civilized. I was on the bow waiting to take Carol's rope and all was well.

It was immediately decided that today's boaters meeting should be at the pub.  We sorted ourselves out and walked across the bridge (another very pretty one way affair with traffic lights) to the Barley Mow.  Lovely pub it is!  My book says it was built in the 1300's.  We collapsed onto their nice saggy sofa and unwound.  Bad luck boys... you get the seats opposite. 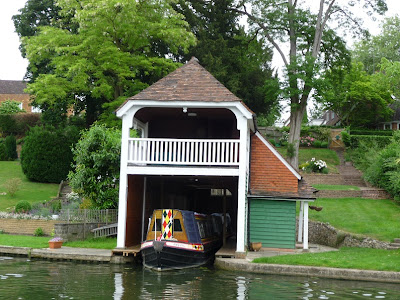 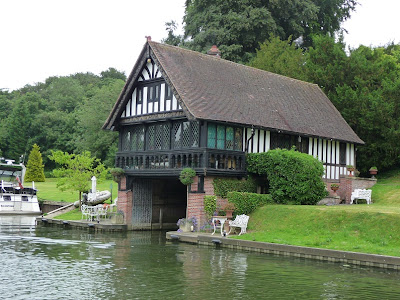 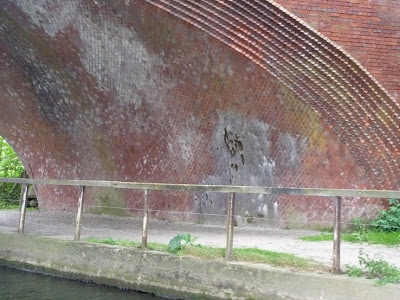 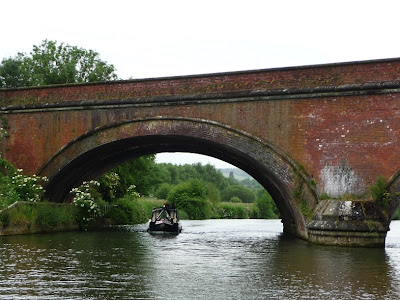 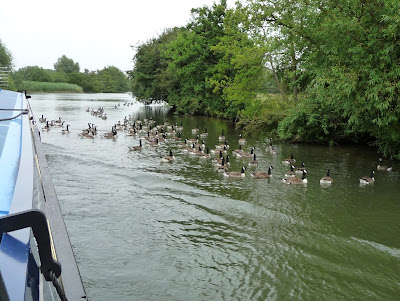 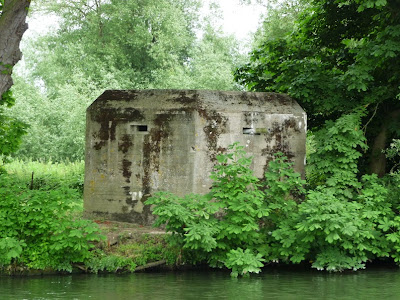 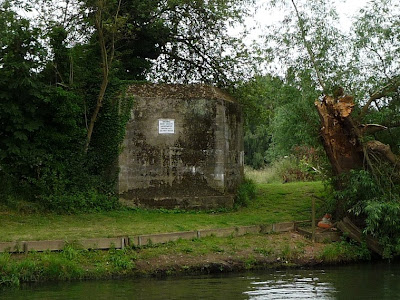 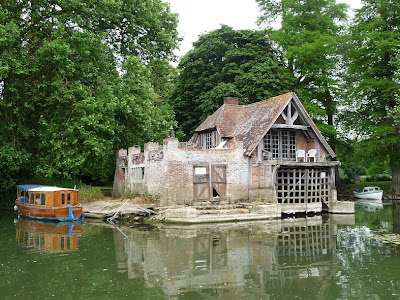 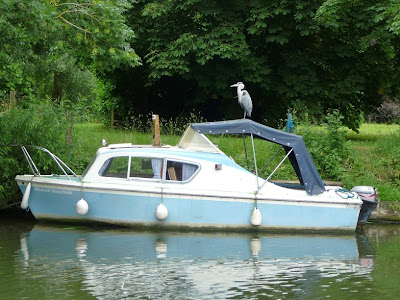 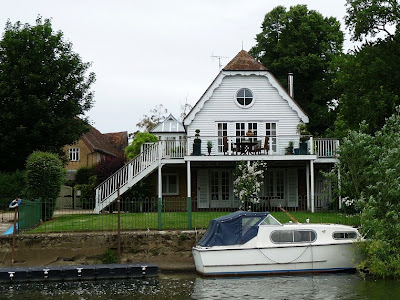 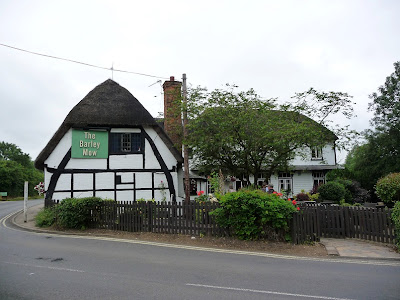 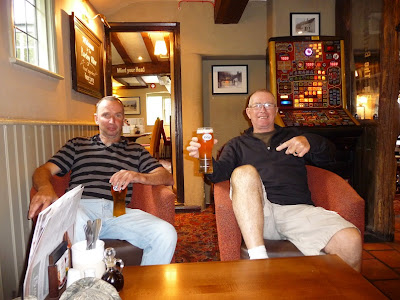 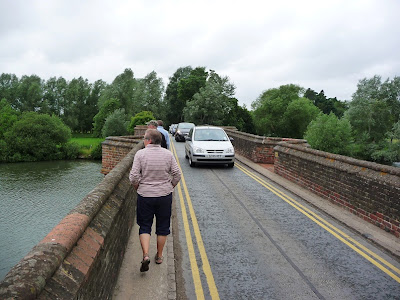 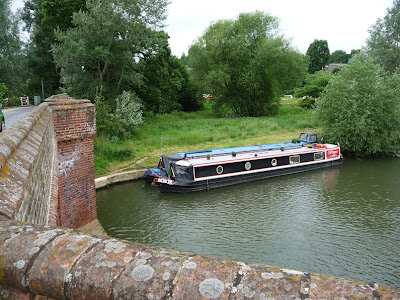 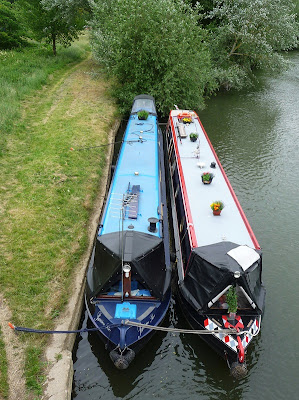 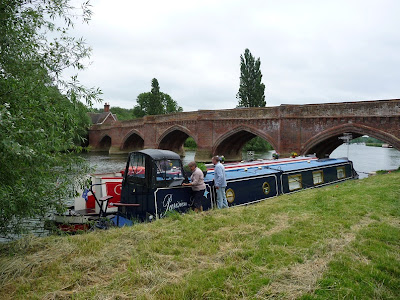