A bit of a mixed bag in this post.  Perhaps it's a reflection of the muddle in our minds at the moment! 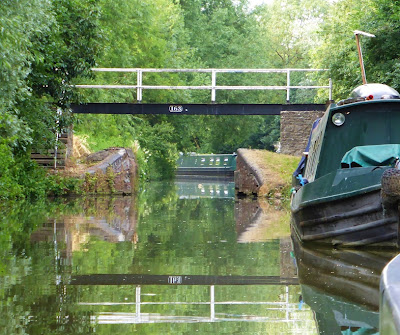 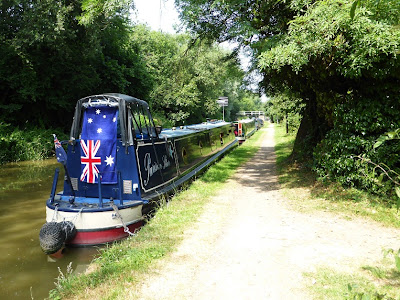 We got up earlyish so we could browse the shops up on the main road just beyond.  They don't have air conditioning so late yesterday afternoon when I walked into a couple during my frustrating journey back to the boat, I turned straight out again and kept walking.  I had gone into Dunelm Mill and started up the stairs to the first floor.  It got hotter and hotter with each step.  Today we had a look in Halfords, in B&Q and Dunelm Mill and Mick went further on to visit Brewers.

We had seen little folding plastic step stools once before and almost bought one.  Today they were in Dunelm Mill so we decided to grab a couple of them at less than a fiver each.  Very clever little things they are - you just flip them open by pulling apart the two side and to close them you just grab the handle and they fold flat. 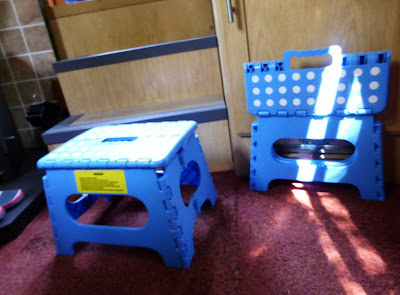 There have been a few boats on the move but no sooner does one leave a mooring and another one comes along and gratefully takes the spot.  We've enjoyed being in Banbury for a few days.  It's enabled us to get hold of a few things we've been looking for.

We have been in a bit of mental turmoil the last couple of days.  Should we stay or should we go!  After chatting with the ABNB folk it made us realize that if we're going to put the boat up for sale early October then we actually need to start thinking about it now.  There's cleaning and tidying and polishing and paint touch up to be done, plus time for a broker to prepare advertising material.  We'd also need to be looking for airfares home.  Having toyed with the thought of staying on a further 6 months than we originally planned, how would my employer feel about that?  What about the tenants in our house?  Would June be a better time to sell the boat?  Wouldn't it be better to arrive at the beginning of an Australian Winter rather than the beginning of a blistering Summer?  The exchange rate is good for us returning at the moment but will that hold out?  Round and round the questions go.

On a lighter note.... we've been learning some of "the Queen's English".  Our first lesson was not to use the word "pants" for anything other than underwear.... the word to use is "trousers".   We wondered why we got a funny look when Mick said he was going back to the boat to change his pants.  The folk must have been wondering why he needed new underwear in the middle of the day. Then there's the multitude of others : bespoke (custom made), bangers (sausages), bobby (policeman), bacon butty (bacon sandwich), cash-point (ATM), chippy (fish and chip shop), jacket (baked potato), fiver, tenner, quid, doddle, faff.  When it comes to cars a sedan is a "saloon" and a station wagon is an "estate".  We are meeting people from all over the UK and beyond and they each have their own language quirks.

I notice we're picking up some of the English words like chap and lad.  But, I'll never get my head around the way some town names are pronounced!  Bicester is "Bister", Worcester is "Wooster", Islington is "Izzlington", and as we head towards Cropredy I still have no idea how you should say it.  I've heard "Cropreddy", "Croppedy" and yesterday a lady called it "Cropreedy".

This afternoon I got a text from Carol saying they were back on the boat after their few days away.  They walked along to have a drink and chat on the towpath so we dragged out the chairs. We got a fair thwack from a passing hire boat the other day which took off some of Mick's carefully applied black.  It'll need touching up before we know it anyway and there's not much you can do about it.  I was just telling Carol the story when a boat came along going hard against the moored boats.  If there's a boat coming the other way it is necessary to move quite close to the moored boats but there was no other moving boat in sight...... he had the expanse of canal to his left.  He scraped along the boat behind us and then clunked into us too.  Mick was inside and his head popped out the window to see what was going on.  The steerer of the boat swung his tiller right across, perhaps to try and steer away from the boats he was scraping against but a quick move like that isn't going to fix it!  His stern was in line with our bow at that point so the back of his boat swung into the space between us and the boat in front and then smacked hard into them.  They came running out too.  The fellow continued on his path of destruction until he reached the little bridge beyond and had to move to the centre of the canal.

Soon after, a boat heading in the same direction called out to ask for help.  The next boat along the row had let go one of it's mooring lines and had drifted across the canal.  Mick and Barry went up to pull it back into its mooring. 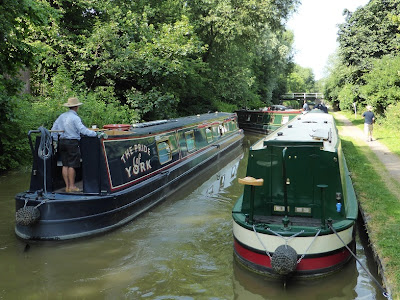 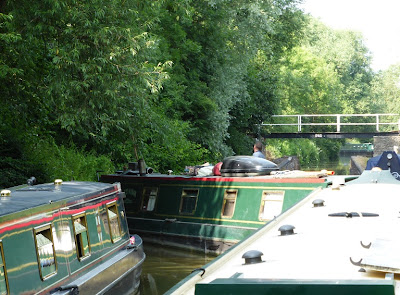 We were poring over our Pearsons guide this morning and we figured we'd leave them behind on the boat.  They were left here for us when we arrived.  But, we were saying it would be nice to be able to remember just where it was we had moored up on each day.  I decided I should scan the map after we've moved on each time and put them on the blog.  I might even back-track a little so we have some of the older ones too.  I wonder if it will mess with people who read on Google reader?  I'd be interested to know if anyone has been getting my refreshed old blog entries as I've been taking the little sun / rain / snow pictures out of the weather forecasts I put in over Winter.  I like to print the blog into a book each 12 months and when I did a draft of the 6 months from Sept-Feb (it will be way bigger this time with so many photos!) all the icons on the weather forecasts came up as huge photos.  They are Jpeg files and you choose what size you want the photos to print.  So.... I've gone back and removed them all.  Took ages!

So, here's the first.. just on the edge of Banbury. 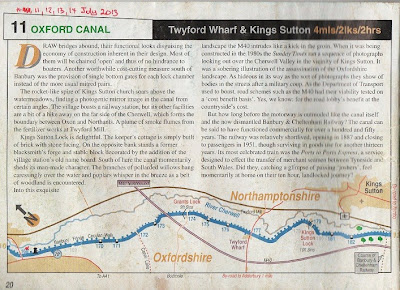 Speaking of weather forecasts..... we really do need to remember this one.  We've had almost two weeks of really warm weather and it's been sunny pretty much the whole time. We have at least another week ahead the same.  It's kind of funny to hear the English complaining of the heat but it really has been hot!  I think it's the humidity that makes a temperature that would be a lovely day back in Australia feel rather too hot over here.  Boaters are all looking for a bit of shade.