This morning was muggy and overcast after the overnight rain. We wavered back and forth about whether to move on or not... it looked like there would be more rain but the cruise ahead was, at least, lock free.   Even nb Winton's Folly were gone before us, but they had no choice.  Their daughter's car was back at Cropredy and she had to go home today.  The sky in the direction they were headed looked ominous but Barry was still smiling. 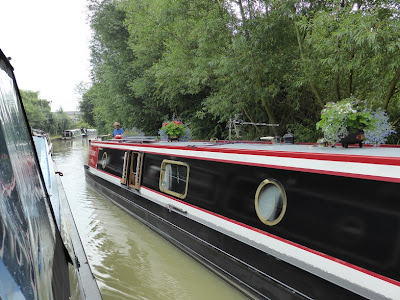 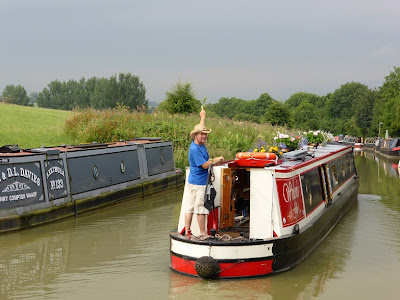 Eventually we decided to go and get water but with boats breasted up at the water point we waited some more. When we did get up there the reason for the build up was apparent. There was a boat moored and locked up at the water point. A hire boat came soon after we got there and they filled their tank while hovering in the bridge hole.

They had to turn and head back the way they came and were nervous of doing so. It's made a bit difficult by the water point opposite the winding hole and a boat moored there too. They'd only been 3 days on the boat so we gave them some advice and headed off so we would be out of their way for the procedure. I think they were glad to not have an audience!  It was lunchtime by the time we were leaving.... unheard of for us.

What glorious countryside we cruised through today. There were green fields with grazing sheep, cattle and a horse.  Shame it wasn't a good day for photos with the overcast conditions.  It was narrow in places and we had some close encounters passing oncoming boats.  The canal snaked back and forth and at times we would see a boat across a field. How odd that looked.  The oncoming boat is just a speck in the first photo below. 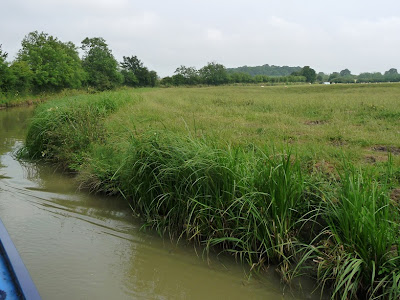 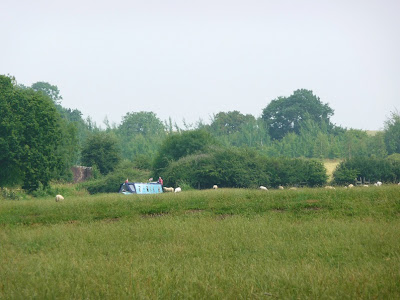 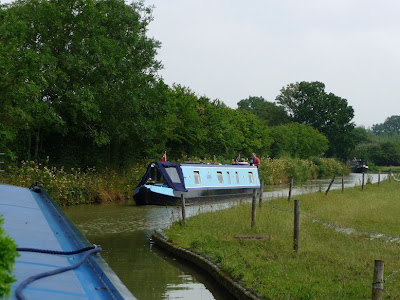 I shared the steering today.  At last I feel that I can deal with whatever comes towards us.  It's taken a while!  Mick had caused chaos the last few days with cleaning up the window surrounds so he was determined to Hoover the floors.... it's one of his favourite jobs!

The weather was kind to us and we had no further rain.  It was lightly overcast for the most part and that suits us fine.  When the sun did come out it felt increasingly humid.  The golf umbrella came into good use.

We saw a long stretch of armcote before we reached the Marston Doles locks and wondered if we should stop there.  It's difficult when you have no idea how long the mooring stretch is.  Our guide shows moorings but we have no idea if there's 3 spaces or 15 spaces.  We pushed on ahead and when the moorings came into view we could see there was just 3 before the water point and one boat was dead in the middle of the first 2 spaces.  We came to a stop on the canal in front of the obviously too short space left between him and the next boat and decided I'd get off the boat and ask him to move along.  The wind had really picked up and it was a bit awkward trying not to be pushed into the other moored boat.  After a bit of too-ing and fro-ing the fellow came out of his boat and called out that they were leaving.  We gratefully pulled our boat back to the very edge of the moorings, leaving a vacant space in front of us.  A couple of hours later the hire boat from the water point back at Fenny Compton came by and Mick went to help them through the first couple of locks.  He wasn't too impressed to find himself helping the next boat as well... it was the one that had been moored on the water point.

So here we are at Marston Doles.  We have the shade of a tree to sit under, the batteries are at 100%, the water tank if full, we have the channel on tv showing Australian Masterchef, the floors are clean, I have internet access.  It doesn't take an awful lot to make us happy these days. 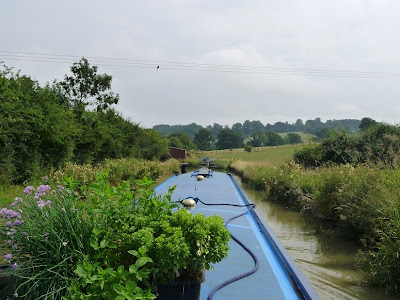 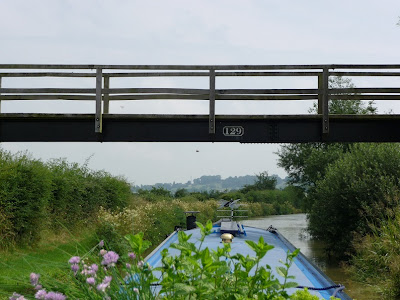 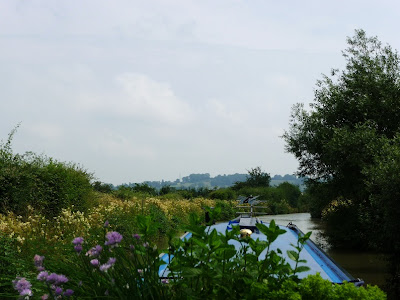 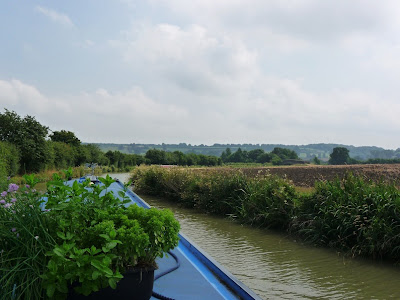 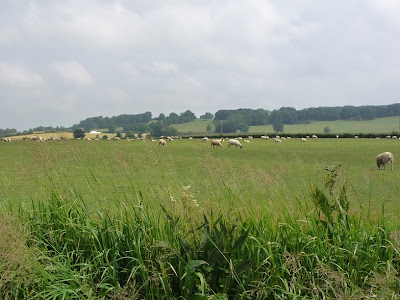 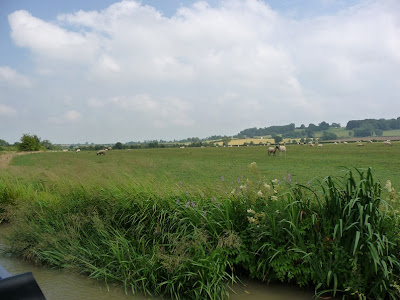 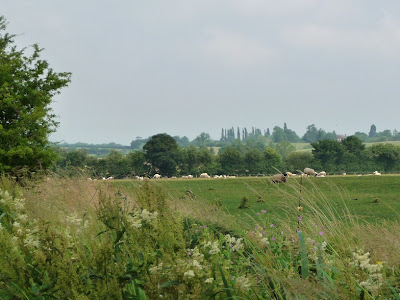 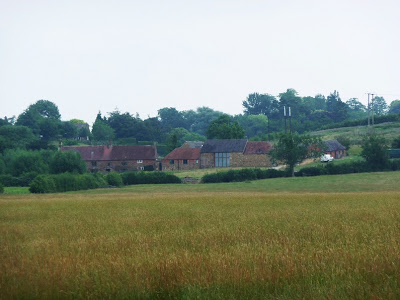 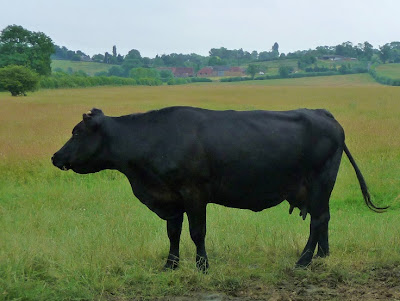 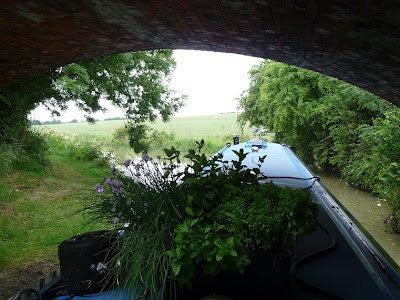 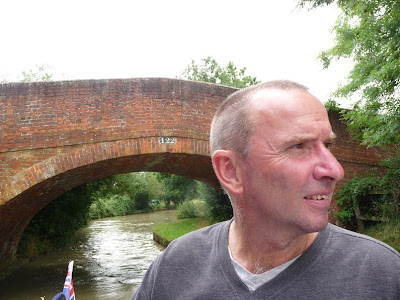 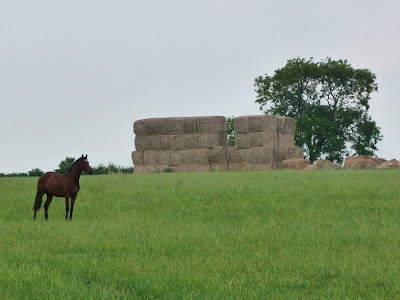 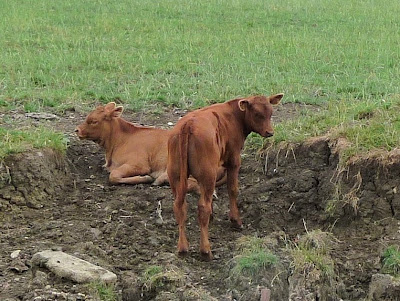 Hi Elly amd Mick
Nice to meet you at Fenny yesterday! That boat on the water point at Marston Doles sounds like the one who was there the day before when we came through - right in the middle, there to stay by the look of it, with 3 ropes out and all locked up!
Debby and Dave

Debby, great to meet you too!
Elly

Lovely pictures Elly think the South Oxford is up there for our next NB holiday, all the more so after reading of it here on your blog.