One year ago today we left home to fly to the other side of the world and live on a narrowboat!

We're always happy to be on the move again after a few days in the same place.  We were up early this morning.  There were several boats on the move so we waited for the movement to stop before preparing the lock.  We said farewell to John and Angela on nb Coromandel... with promises to keep in touch.  So here's two Crowns : 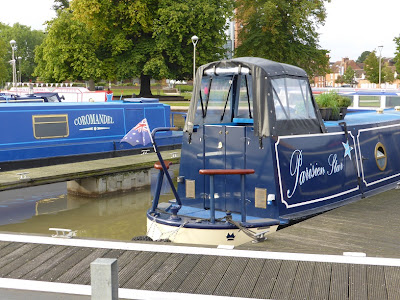 It was exciting to be out the lock and onto the river although we had a brief stop just around the corner to fill our water tanks.  It's very picturesque.

We had 6 locks today.  The locks on the river are large and the gates requiring a bit of effort to open.  I did like the paddles on these locks.  They required plenty of winding but it wasn't all that hard.  Barry did most of their share of the lock work today to spare Carol the risk of straining herself too soon.

At one lock a pair of swans rushed to get inside the lock before we closed the gates.  As we opened the paddles to fill the lock one of them in particular was really enjoying riding the waves.  They must make sport of the locks because no sooner had the lock reached full and they were right at the V of the gates waiting for them to open.

Every lock was against us but with only 6 to do and them being well spaced it was no effort at all.  We copped a mouthful from a fellow on a boat obviously following along behind us and at one lock we dallied to work out where the next Elsan would be so he caught us up.  Goodness, he gave us a mouthful about leaving the bottom gates open when we left the locks.  We pointed out that the signs said we should do so but he obviously felt the rules should be different for him.  Luckily we stopped for lunch so he overtook us.  We noted that he left the gates open himself!

The paddles in the top gates are above water level when the locks are empty and some of the locks gushed water out with amazing force.  I'm glad we're heading downstream.  The emptying of the locks was quite gentle.

In the afternoon the wind was picking up so we were glad to moor up.  We breasted up and shared a mooring.  Mick go chatting to the fellow on the boat in front of us who had his engine roaring.  He'd hired the boat and there was a problem with the electrics.  We had a rather annoying hour or so with smelly fumes pumping into the boat when he mentioned to Mick that they'd be using a generator from dinner time onwards and wouldn't be going to bed until 10.30pm at earliest.  Mick asked if he'd change places with us as he'd then be at the end of the row and could put his noisy generator right at the end of the mooring.  The fellow wasn't happy but he had to see the logic in that.

We've had several disturbed evenings or nights lately with boats running their engines much later than they should, or on one occasion they started it up at 9.30pm right beside our bedroom.  Barry and Carol had one running their engine at midnight.  When the boat in front of us started his up last night it was just the last straw for Mick so he went out to ask what the story was.  This fellow had also hired the boat he was on and been told to "run the engine for an hour or two before you go to bed"!  Well that's just lovely for everyone moored around you.  He did concede it was a bit unfair and turned it off again.

It was a lovely days cruising... for us anyway... Barry was having an "off" day and was grumpy (I'm sure the swearing boater and the running engines didn't help). What pretty scenery along the Avon.  It will be an enjoyable week or so. 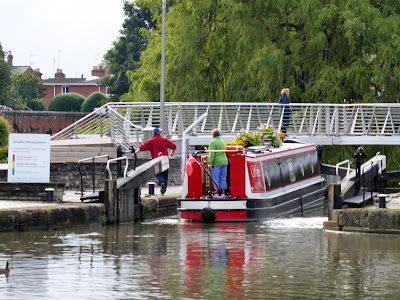 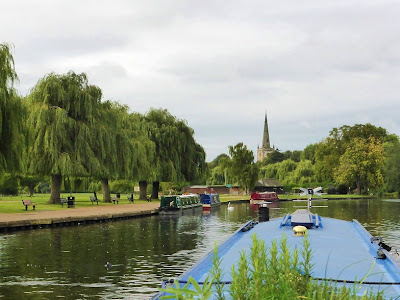 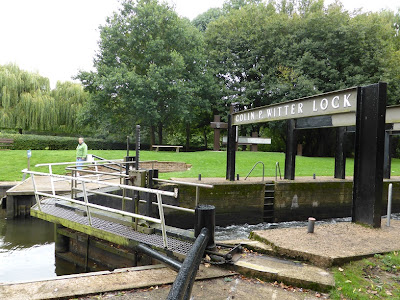 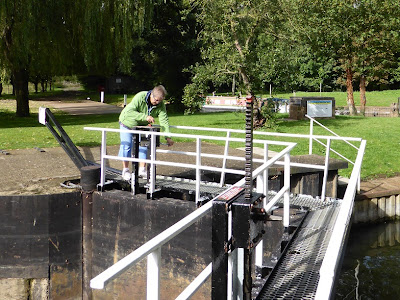 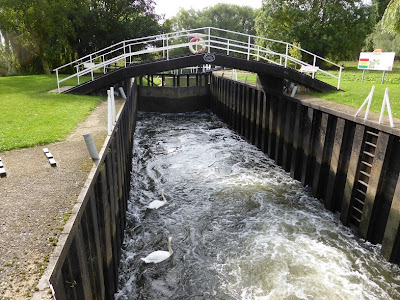 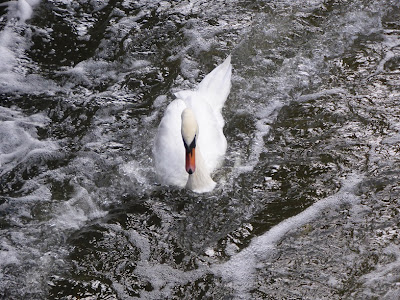 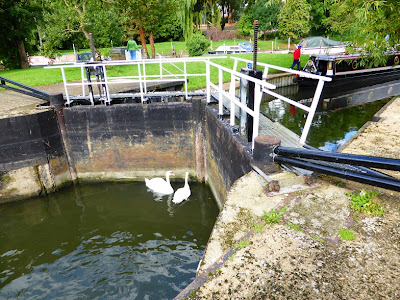 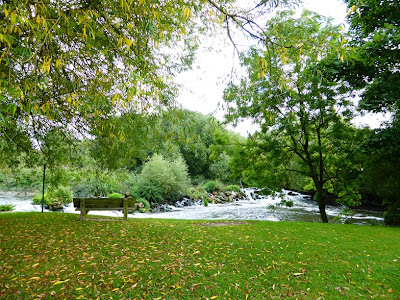 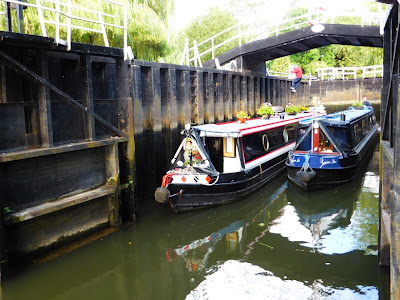 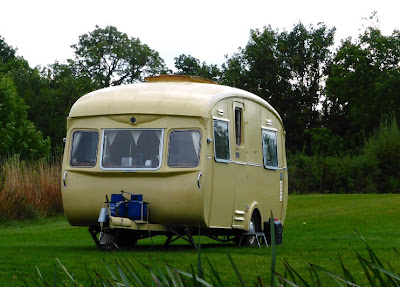 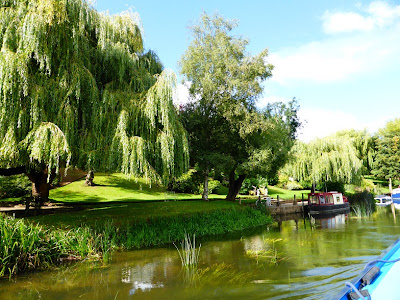 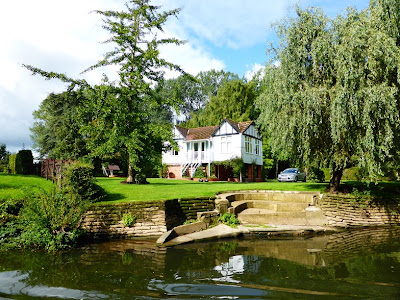 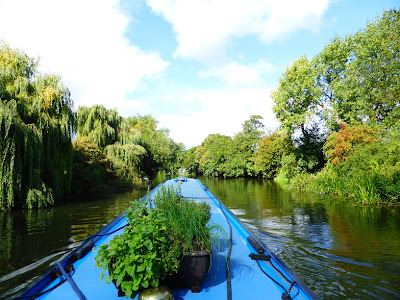 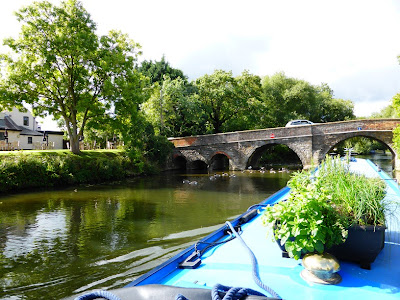 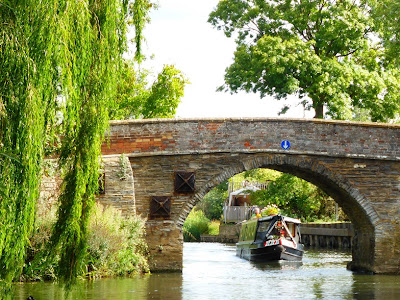 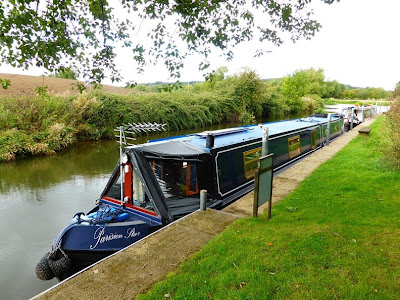 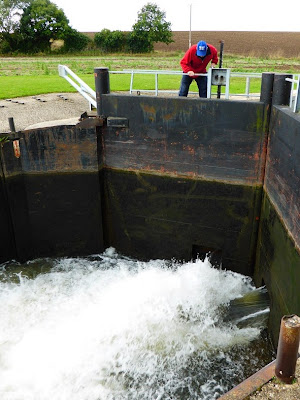 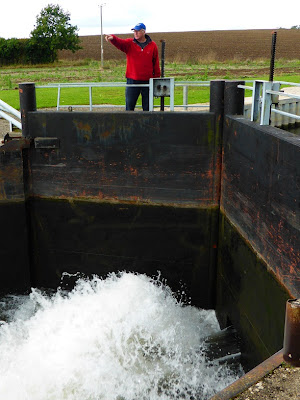 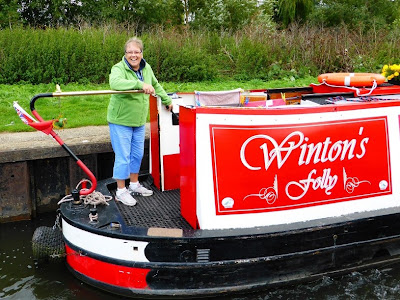 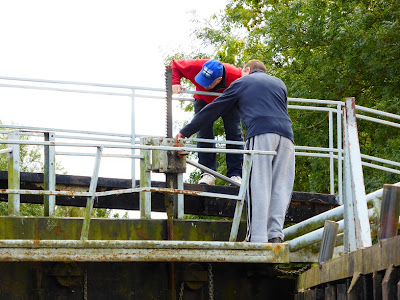 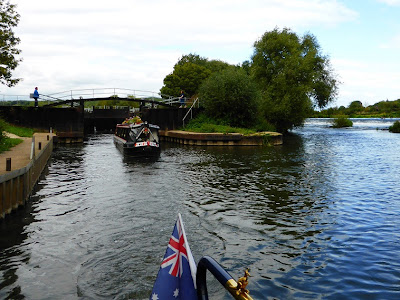 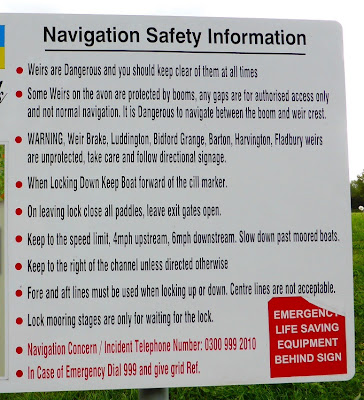 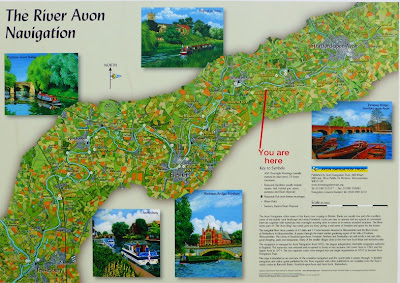 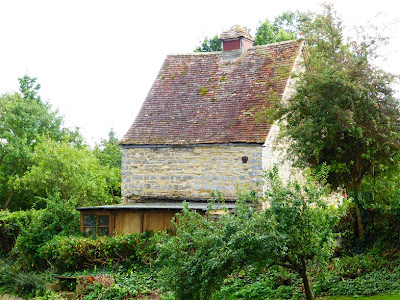 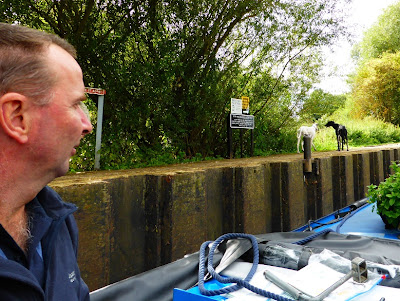 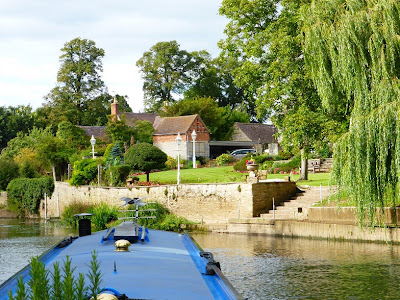 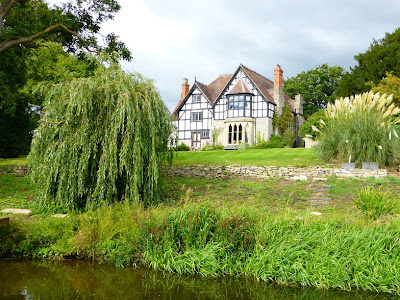 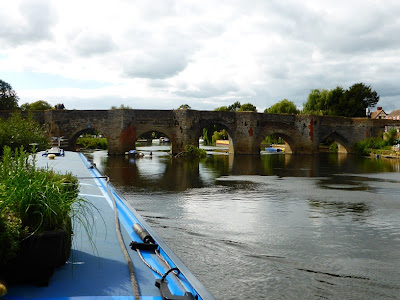 Hi,
If you fancy a REALLY good meal we can highly recommend The Bridge at Bidford on Avon. We've been several times and it has always been amazing!
Hope you are both well,
Yvonne & Roger

Hi Elly. CandRT by-laws re engines and generators running are that they are not to be run between 8pm and 8am, (unless of course there is no-one around that it would annoy, in open country for example). I would presume that the river authority by-laws are similar. What I would do in those circumstances is politely ask the offending crew to turn it off, explaining the rules, and if that failed, take out a pen and paper and write down the name and registration number of the boat, informing them that you will be informing the navigation authority, (which of course you won't be). This doesn't always work with the stubborn experienced ones who are obviously ignorant and should know better, but it usually works with hire boaters. I sometimes leave the 'considerate boater' link and logo on a piece of A4 on boats that are seriously offending in other ways, and are unattended, e.g moored where they shouldn't be, for my own satisfaction more than anything else. If hire boaters don't gather experience along the way how else will they learn? I know boating is supposed to be a relaxing leisure activity, but there is always someone out there who is ready to spoil it for everybody.

Yvonne, thanks for the tip. Pity we're moving on today!

Peter, it annoys me that when you hire a boat you aren't told about basic etiquette. At the very least, not to moor at water points or winding holes, and the 8-8. It's common sense and it would never have occurred to us to do those things when we hired but it's obvious there's plenty of folks that need reminding.

Hi there, Am enjoying reading your blog from a messy spring in Wellington NZ. We have just purchased a lovely narrowboat and are starting 6 month cruising in late May.
We've been hiring regularly since 1990 and over that time as the number of boats has increased, we've noticed a decline in adherence to boating etiquette - some by hirers but a significant decline in owners' belief that the rules apply to them too. The biggest hassle we find is boaters not checking if anyone is approaching a lock when it is set against them, but blithely emptying or filling a lock and wasting a lockful. Back when we started boating the 'rule' was you had to wait 45 minutes to see if another boat could make use of the water or join you in a double lock. Now though some people don't even look round the corner...
However, that said, we find narrowboaters, owners and hirers, to be so friendly and welcoming in the main. As you no doubt find, being from the Antipodes is a natural conversation starter!
We are so looking forward to setting off on our cruising for more than 3 weeks at a time!
Hope we'll see you on the cut next season.
Marilyn McD

Hi Marilyn,
Nice to hear from a new reader. Sounds like you will be arriving just as we are leaving. What a shame you've already bought a boat! What's the boat name... and where do you have her moored?
I'm sure you'll just love your six month cruise. Will you do that every year?
You'll see we often encounter the frustration of selfish folk at locks. So annoying.
Cheers, Elly