Despite our intentions of moving on today, it didn't happen.  Mick had bought a pair of Canterbury brand track pants... or am I supposed to say "track trousers"... that were too long.  He had taken them to be altered (beyond my hand sewing skills when there's a zip down each leg) and paid for express service so they'd be ready yesterday.  They weren't.  We're still in Banbury.

I was reminded this morning of walking back to the boat with Barry and Carol yesterday afternoon.... I'd walked along the towpath to meet them and we returned through the park beside our mooring.  There were youths sitting on a seat and they were throwing their rubbish on the ground despite there being a rubbish bin right beside the seat.  What a shame they take so little pride in facilities provided for them.  The photo below was this morning. 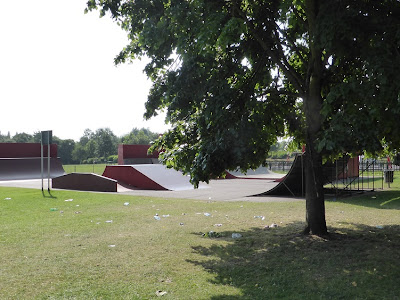 There has been a light dusting of cloud on and off today which is very pleasant.  We are in the shade until about midday but from then until later in the afternoon we have been in the direct sun.  It's been nice today to have a bit of relief but this evenings news said today was the hottest day so far. We went early to Castle Quay for some last minute Marks and Spencer groceries and even by 10am it was quite warm inside the shopping centre.  It was enjoyable walking around the town in the morning before it was too busy and too hot. 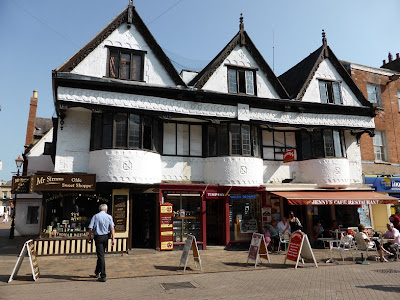 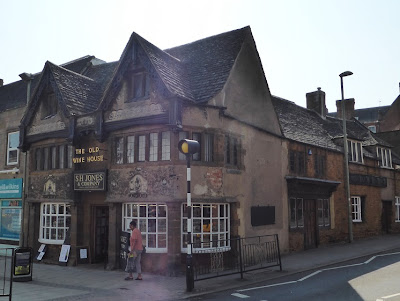 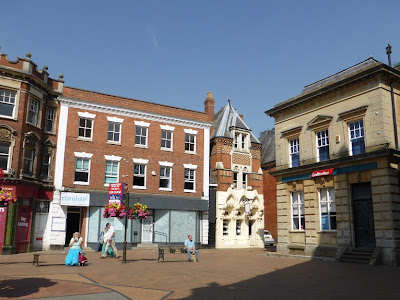 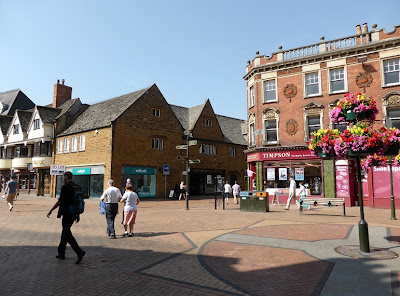 I had work to do so came back to get stuck into that while Mick did a few of the things on his list - repairing one of our golf umbrellas and getting out the timber bleach to try and remove some of the water staining on the side hatch doors.  He got a great result on the doors so far!  This is after the first application left for half an hour.  We knew about this water damage before we bought the boat - friend Lynne pointed it out to us when she came to check out the boat before we bought it.  It's the most difficult thing about buying a boat you haven't seen.  I have dozens of photos taken be the broker and none of them showed it.

We thought of 3 more things we needed from the supermarket so when Mick went back to collect his trackpants he said he'd get those 3 things.  He rang me 4 times to ask which brand, which size, what sort!

We only have about 4 working tv channels at this mooring so we've watched a couple of episodes of "The Water Boatman" on DVD.  We used to watch narrowboat and canal related DVD's at least once a week in the couple of years before we finally realized our dream.  Watching these programs now is a really strange feeling.  I kept getting the same feeling I did when I watched them two years ago.... wishing I could be there on a boat.  When I said this to Mick he started laughing and said he'd felt exactly the same.  It didn't quite seem real to watch those programs when we're actually sitting on our own boat moored on a canal.

This evening we met Barry and Carol at the Wild Lime in Banbury for a drink.  Carol and I tried out the raspberry and lime cider.  Not bad!  We had a chat with the folk at the next table who turned out to be moored behind us a couple of boats.  They kindly took a photo for us.  It was a bit cooler once the sun had gone down and by the time we were walking back there was a lovely cool breeze.  The little wharf looked deserted just before dark as we walked by. 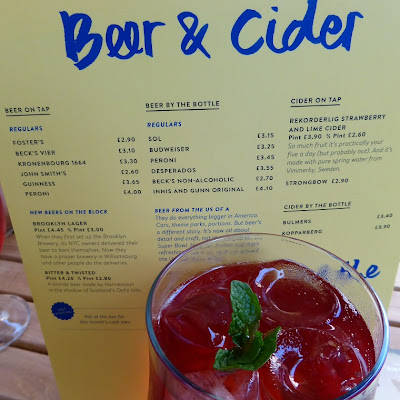 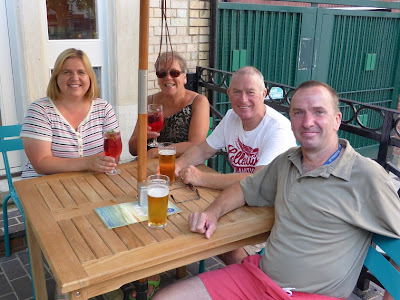 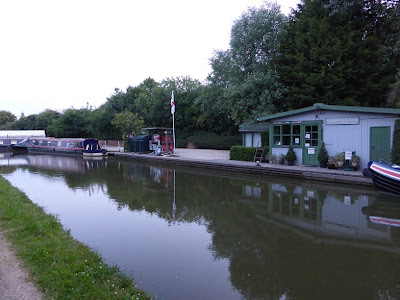 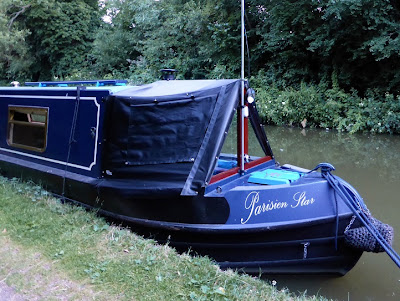 We have been looking for something like timber bleach and are wondering where you bought it from. Good to see you are enjoying yourselves stilll and living the dream : )