Banbury - the other side

Today we could wait no longer... we needed water.  We rather liked our mooring and knew that if we left it we'd lose the spot.  We moved off after breakfast and stopped on the water point below the lock, getting a load of washing started just before we were ready to go.  Quite a slow filler, perhaps the one above the lock would have been a better choice, but we were happy enough to be stopped in the shade of the bridge for a bit.  Lovely view of the Elsan facility out the side hatch... for those back home, it's where the folk with loo cassettes empty them. 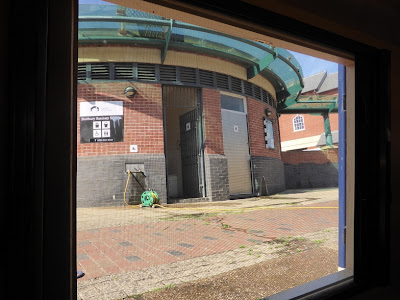 We almost lost a tyre fender entering the lock.  We'd forgotten we had put it down at the mooring and the plastic hook broke as the boat squeezed into the rather narrow lock.  A kindly passerby saw it and actually lay down on the ground to reach in and grab the floating tyre.  He's done his good deed for the day! In the lock we noticed the bus station right behind it.  We had been through Banbury on the National Express bus on the way back from Heathrow in March.  Little did we realize as we sat on the bus that if we'd looked across we would have seen the lock. 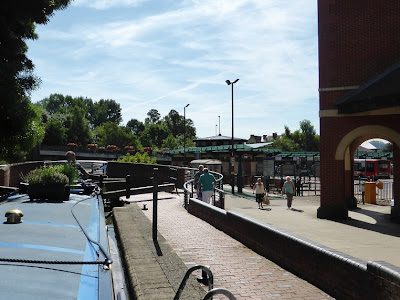 Just as were about to leave the lock a boater coming the other way, opened the lift bridge, came down to tell us to leave the lock gate open, and then walked back to his boat.  By this time there were 2 or 3 shoppers on either side of the lift bridge, waiting to cross.  I'm thinking they'd be standing there a while as we went through and looked back to see the boater hadn't even moved off the bank yet.  His partner was standing beside the boat so I'm not sure why one of them didn't just open the bridge so they could get through and then close it again?  There was no boat in the pound. 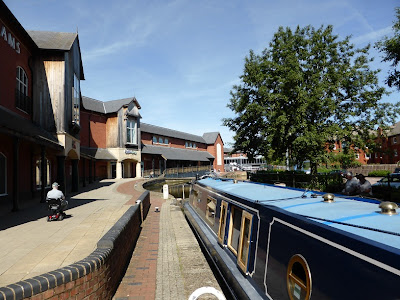 The moorings in Banbury are pretty much full.  I'd walked along while we were filling with water and there were 3 spaces free - one in the open sun opposite the shopping centre which would have been ok, one beneath the road bridge which would be great for shade but the boat would be poking out a few feet each end and I'm always worried undesirables might throw something from the bridge onto the boat, and a third spot around the corner from the central moorings with a strip of grass, shrubs beside it and a park on the other side of the shrubs...but no shade.  nb Uccello was moored in front of that spot with a nice tree beside them which offered a bit of shade on half the boat for half the day.

By the time we were through the lift bridge, the first spot was gone so we went in behind Uccello.  I went for a walk ahead again to see if there was anything else.  There's a lovely stretch of mooring with trees and shade but the boats were packed in like sardines.  The sign said 48hrs but I just have a feeling that a lot of those boats will take no notice of it whatsoever.  Reminds me of a story a boater told me today about pulling into a 24hr mooring and have the fellow behind say not to worry about the sign... he'd been there a week.  Is it any wonder it's getting so difficult to get a mooring?!

Back on the boat, I was on the phone when a lady on a passing boat yelled through the side hatch that she read the blog.  By then it was too late for me to see the name of the boat so I had no idea who she was.  A short while later she walked by with her dog - Irene from nb Freespirit.  Lovely to meet you Irene.

A boat that we'd seen around the corner came by and called out to us that they'd just left a shady mooring and we should go!  I walked around there with the 2 way and when I could see nobody was coming the other way called Mick to bring the boat round.  So we have a little more shade now.

I decided to walk to Tesco.  My First Mates Guide says it is accessible from the canal but "access is not easy nor obvious".  Now what does that mean!?  I've asked several people and nobody seemed to know a way of getting from the canal up onto the A422 which passes over the canal.  There is no walkway provided.  I walked along and when I got to beneath the road there was a bit of a channel running beside the canal.  How was I to get across that?  A pair of walkers came along and directed me to a little bridge across the channel but they had no idea if you could access the road.  From there I was looking at huge locked gates but to the right was a narrow little track worn through the scrub that climbed up to the side of the road.  Across the roundabout it was apparent that people had been trampling through the buddleia beside the enormous Tesco sign to cut through into the carpark.  So, it is possible.

I bought the couple of things we wanted from there... mainly Tesco el-cheapo loo paper that seems to keep our loo happy.  I looked at the map on my phone and it showed a road winding around and meeting the tiny footbridge that was just ahead of our mooring so off I went.  It was hot and there was no relief from shade walking on such a big road.  And it turned out my map was lying.  I went back and forth down each little road and then realized I was past where we were moored as I could see the bakery that we'd been able to smell as we moved ahead to the new mooring.  It took a while but eventually I wove my way down between Halfords and B&Q, behind some offices and a carpark and I could see the footbridge.  We actually have quite easy access to quite a range of retail park stores - Halfords, B&Q, Wickes, Staples, Dunelm Mill, Homebase, Currys.

We had a lovely sunset last night on the other side of Banbury. 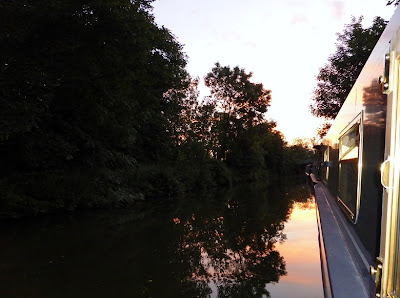 Agreed. Tesco Banbury on foot is not fun (probably easier to go back to Morrisons). Make sure you have everything as there are only two a day buses from Cropredy.

Joe, we saw on our map that there's a fair way to the next supermarket. We have to pay for a bus so often just pay for a grocery delivery instead! This boating lark does require a bit of forward planning.
Elly