Braunston to just before Napton

We saw this morning that the boats ahead of us had gone and there was nobody on the water point.  It had been busy from early morning.  We grabbed the opportunity and moved the boat forward a couple of spaces to top up the water, then winded in the marina entrance before heading off back to Braunston Junction and in the direction of Napton.

Our plan was to turn at Napton Junction to go up the first lock and have the loo pumped out at Calcutt Narrowboats.  As we approached one of the bridges we saw nb Winton's Folly heading towards us.  Throttles in reverse and we both moored up for a cup of tea and a catch up.  We've missed our buddies.  It was near on lunch time by the time we moved on again.  We had a plan cooked up to meet again next Friday.  The wind was really picking up as we went on our way.

No sooner did we get going and Mick said he was hungry for lunch.  I was on my way to the galley to prepare something when I heard him frantically reversing again.  For our non-boating readers...... reverse to slow the boat down.... not actually going in reverse.  I looked out to see we were now slowly passing nb Josephine!  I called out our galley window as we passed their side hatch and Andy and Jean came running out.  We moored up again and arranged to gather on Josephine for coffee once we'd had our lunch.  What a pleasant hour or two we spent catching up on all the doings of the last 6 weeks or so since we saw them last.  Jean had a jigsaw puzzle on a mat on their dinette and sitting there sipping coffee I just couldn't help myself.  I did make sure I left her some to finish.   We've spent more time with Andy and Jean since leaving the marina than all the months we spent in there!

As we made to leave I set the timer on my camera to try and get a photo of the four of us.  There was a couple of false starts before I got it right.  Leaping off the boat left it rocking with the camera perched on the roof!  We got there eventually but we were roaring laughing by then.

Finally on our way again and it was well into the afternoon.  By the time we reached Calcutt it was after 4pm!  Honestly... what happened to the day?!  We had to wait about a bit while they sorted out a hire boat.

We had a bit of a terrifying experience while we were on the services mooring.  A young chap had moved the hire boat out the way so we could go onto that mooring.  It was windy and he struggled a bit to move the boat himself as he needed to turn it 90 degrees.  The service mooring is along the bank and the hire boats are stored with sterns against the bank and all tied up to each other.  The boat he was moving had been pushed by the wind right out to the other side of the pound on an odd angle.  I don't know what or why but I heard an engine revving and when I looked out the galley window the boat was reversing fast towards us.... not in itself so terrifying.... but there was nobody at the tiller!  The fellow was at the bow!   It was right in line to hit us at about the spot where I was standing  He glanced up and realized what was about to happen.  I crouched on the floor waiting for the impact.  He ran along the roof of the boat and by some miracle managed to throw the throttle into forward gear... spraying the side of our boat... and ended up just touching us.  Oh my goodness.. my heart was thumping.

By the time we'd pumped out and topped up the diesel tank it was well after 5pm as we went back down the lock.  It's not our preferred method to be looking for a mooring so late in the day and the options between the lock and the junction are very limited.  We turned towards Napton but it was actually quite a way before we spotted a section of armcote right before a boat moored by itself.  The moorings along the way were all taken.

The wind was a battle by now and we slightly overshot the mooring before seeing we'd be able to fit there.  It was a bit of a close call.  The wind made it extremely difficult to reverse back to get to the mooring.  The boat was being pushed across to the opposite side of the canal.  I won't mention any names, but one of the people on our boat was getting rather worked up about it.  We eventually managed to get where we wanted to be and the boat moored up.  The folk on the boat in front came to chat..... Cathy from NZ and Murray from Scotland on their share boat nb Verity.  We didn't get inside until near on 7pm.  Much later than usual for us to have our mooring sorted.

We noticed today how much drier the countryside is looking.  A lot of the crops have been harvested and some sections looked decidedly "brown".  It's more what we're used to seeing at home.

Last night at bedtime the Braunston Church was a picture in the distance. 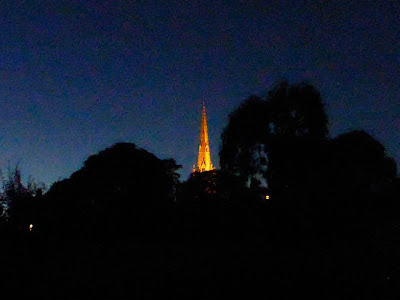 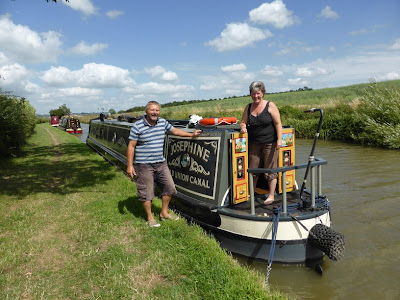 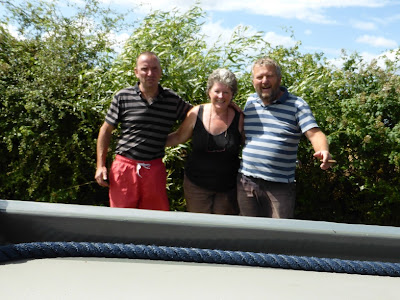 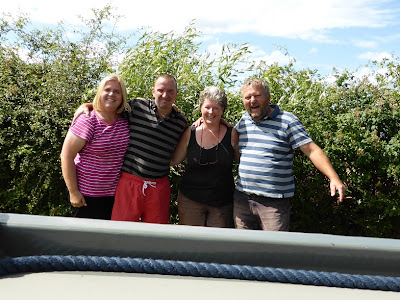 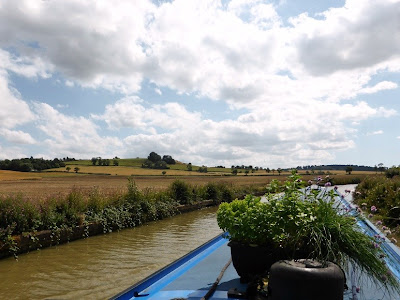 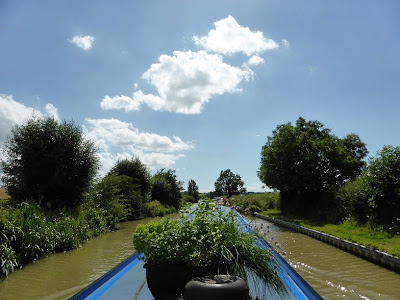 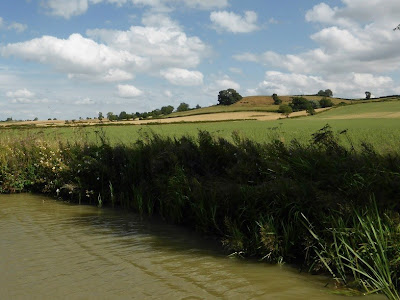 For future reference, there are some fantastic moorings between Calcut and the junction -- on the offside by the reservoir. They're just beyond the permanent moorers, and are not marked, so only those in the know use them. You'll probably have to tie up to a tree, but it's a great spot.

Adam, thanks.
You wouldn't believe it - Mick saw those moorings and I told him I didn't think we'd be allowed to moor there! We'll know net time.
Elly