I've noticed there have been a few searches lately for pram covers on trad stern narrowboats.  They have lead the searchers to my post about this last August when we were trying to decide whether to get one.  I thought I'd post an update now that we have one.  We love it!

Now, I know plenty of people will say they spoil the look of a narrowboat.  I prefer a boats appearance without the cover on too.  But... sometimes practicality wins out and now we wouldn't be without it.   It isn't about steering in the rain - we use a golf umbrella for that - but we spend a lot of time moored up and that's when the cover is such a benefit.

We don't travel with it up - except for the 2 weeks on the Thames.  The bridges are too low and it does restrict visibility.  On the Thames it was so wide and open and the bridges were so high that it wasn't an issue at all.  We quite liked having it up then.  There was a bit of rain and it was quite windy so the pram cover offered good protection.  We keep a small squeegee at the stern and if it had been raining I'd just wipe down the front window to improve visibility.  During the day we took the side windows out for ventilation and on the hot sunny days the cover provided a bit of shade.

I had talked to Ray and Diane on nb Ferndale about theirs before we went ahead with out purchase.  My main concern was the putting up and taking down of it but it isn't an issue at all.  By the time Mick's tied the bow and stern ropes, I have the cover up.

As soon as we stop I lift it up, clip on the two side flaps and put up the centre bar.  This is all that's necessary and it honestly takes no more than 2 minutes.  Earlier in the year when the weather wasn't so sunny I'd also put the side windows on so we'd have protection from the elements over the hatch.  I can even put the side windows on now without going outside the boat.  This certainly helps when we moor up in the pouring rain.  I put up the cover and then stand in it's shelter to put on the windows.

We like to have plenty of fresh air so it suits us well to be able to leave the hatch open even if it's raining.  In Winter I'd often have the hatch open during the day with the pram cover all zipped up and the door to the bedroom closed.  It just felt better to not have everything closed up.  That's probably due to our habits back home.  We never ever closed our bedroom window and our back door was open about 8 months of the year. 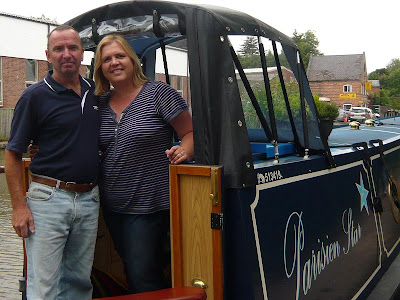