Last night was card night on nb Winton's Folly.  It's been a while.

This morning we set the washing machine working again.  It's been a bit of a chore to catch up so much.  Having been away a few days we had sheets and towels and lots of clothes.  The hamper was full to capacity.  We saw there was a water point just a couple of bridges ahead of where we were moored so that was going to work well for topping up the water tank ready for a few days in Leamington Spa and Warwick.

There was a boat on the water point when we arrived.  We moored up before the bridge as it's not really possible to breast up so close to a bridge.  We waited and waited and eventually decided to continue on and get water at the next one which was mid way down the locks.  As we passed the boat on the water point they were having a cup of tea!  It was a good decision.  Nobody was at that one and there was space for two boats.  We filled up and then moved to the other side of the canal for lunch.

The locks in this area have a different mechanism to those we've dealt with before.  Most of them aren't too hard to wind but it takes 22 winds to open those paddles.  All the physical work has at least eased the pain in my neck and back from a lumpy bed in Tenby.  A couple of the locks were really, really hard to wind and struggling to force the windlass around 22 times is hard work but it's all part of the fun.

At one of the last few locks we encountered nb Firefly NZ.  We barely got to say hello with boats coming in both directions and one boat having a good shot at smashing through the lock gate.

We stopped for the night at the bottom of the lock at Radford Semele.  Lois lives just around the corner and will come along for a little cruise in the morning.  It's a beautiful evening.  The mooring is just beneath a bridge and around the bend from the lock.  We get a little advance notice of a boat coming down from the lock as the water starts to flow past the boat when they empty the lock.  There's been a few boats to wave to from the side hatch.

We watched with interest as the boat moored in front of us was cleared of all personal possessions.  Then at about 6pm a few more people arrived and spend an hour and a half being shown over the boat.  Eventually they locked it up and left.  I'd say someone's just bought themselves a narrowboat! 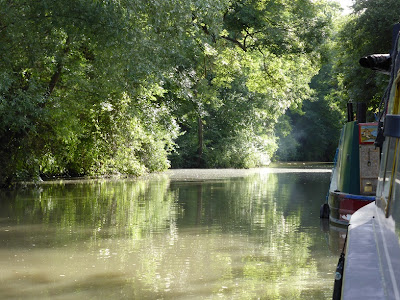 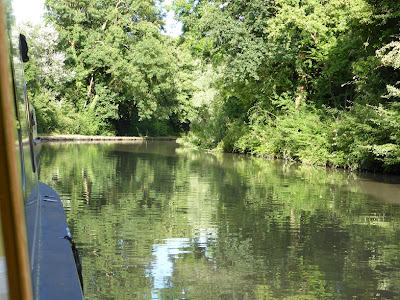