Having arranged to meet up with our friend Lois on Thursday in Braunston, we headed on again.  It was a drizzly old day but the golf umbrella solves the problem so off we went.  About an hour from Braunston I noticed a missed call on my phone.  It was Maggie and Ray who just moved house on Friday from West Sussex to Warwickshire.  They fancied a bit of a drive so would meet us at Braunston in an hour.  We haven't seen Maggie and Ray since arriving in the UK we were glad to be having the opportunity of a catchup.

We get no phone reception at Braunston on the canal.  We moored up and I walked through the marina and up to the road above where I got a weak signal but enough to ring them and tell them where we were moored.  They arrived at the boat not long after I did.  After an inspection of the boat we sat down to a cup of coffee and a catch up.  It must have been 4 years ago that we last saw them and there was lots to talk about with a series of false starts on selling their previous house and buying the new one.

Ray had his first lesson in canal etiquette as he was facing the window on the canal side and all the passing boaters kept waving at him.  He got the hang of it after the first couple of times.  Next thing we knew Mick was all but leaping up from his chair.  He'd spied nb Winton's Folly gliding past!  They hit reverse when they spotted us and stopped behind us for a quick hello, introductions of our friends and theirs, inspection of each others boats by our visitors, and arrangements made to meet up again Friday night.

We're meeting our friend Lynne on Sunday at Napton to exchange the boat for her car and we'll head to Wales for a few days.  Barry and Carol are having some work done on their boat next Wednesday and we'll be back onboard Thursday so by the following weekend we'll all be ready to head off together to tackle the locks on the approach to Royal Leamington Spa.

We had lunch at the Boathouse with Maggie and Ray... the service was a bit slow today but it was rather busy.  We walked them back to their car and then stopped to give Tyson the fender shop dog a pat... or a "fuss" as they say here.  We realized then that we'd forgotten to take a photo with Maggie and Ray.  We'll see them again in a couple of weeks time so we'll have to remember then.

While we were at Rugby we bought some picture frames and put up the four narrowboat cartoon sketches we'd bought the week before and also a few photos.  Feels a bit more homely.  We made sure to choose things that can stay on the boat when we sell it... even if they change the pictures in the frames.  We've been trying to cover the holes left from the previous owners pictures.

As I was taking these photos today I was reminded of a funny comment from one of the Canadian hire boaters we met the other day.  We have our omni directional aerial sitting upside down in the metal ash bucket.  She asked me about our washing machine and it took me a minute to work out what she was pointing at - she thought the aerial was an agitator for washing in the bucket! 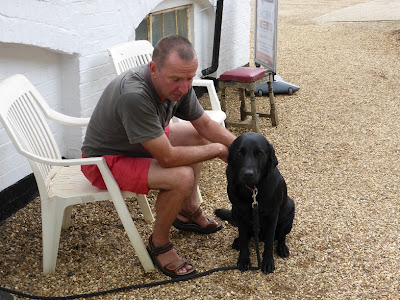 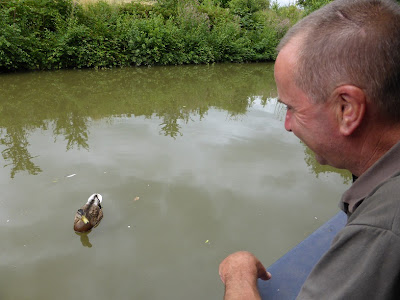 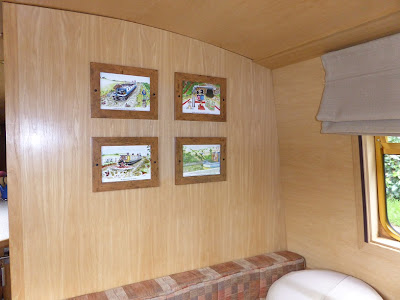 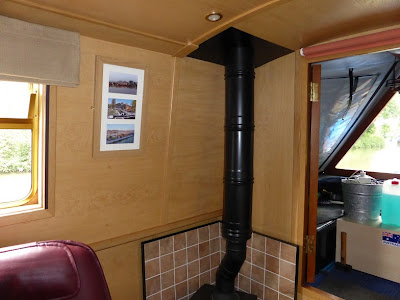 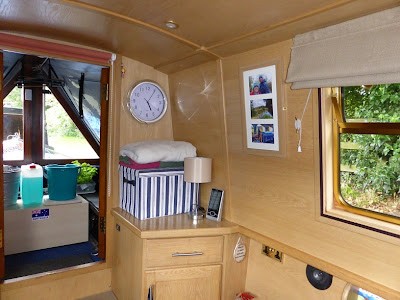 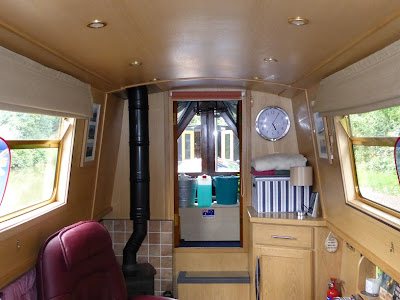 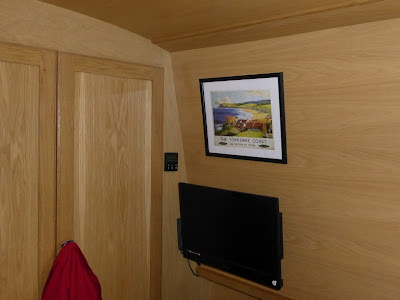