Last night was cold!  It was also my sister-in-laws birthday morning back in Oz (a special one that I probably shouldn't mention).  We don't get good phone reception inside the boat through all that steel so we either need to sit in the cratch or open the rear hatch and sit out there.  I put on my big black coat, hood and all, and sat on our rear step with the hatch wide open to ring Leanne and wish her a happy birthday.  We had a great chat and it was so nice to hear her voice.  I used to spend a night a week at their place in my old life so I've missed her and my brother.  Happy Birthday to you Leanne!

When we went to Hanley the week before we were amazed at how cheap the family day ticket was that the bus driver sold us.  It was £4.85.  I noticed later that there was a sign saying family tickets would be half price until 13 January.  We decided we should make the most of it and have another day out on the bus before the 13th.  Today was it.

We set the alarm for the first time that I can remember and didn't mess around so long in having breakfast.  We decided we would take the bus to Trentham Gardens to look at the shops and then further on to the Tesco we'd seen on the Hanley trip.

There were some amazing old ruins around the back of the Trentham Gardens garden centre and shops.  Obviously leftover from the old estate which originally also included Trentham Hall.  I investigated when we got back and discovered that the old hall had been demolished by it's owner in 1912. Read here.

We had lunch in the garden centre and then hopped back on the bus in the direction of Stoke on Trent.  We had asked the driver to let us off at Tesco and as we were approaching that stop the driver called out "Tesco!".  Mick called back "Thanks mate!" and there was a few titters among the other passengers.  We topped up on fruit and veg (the rest of our groceries being delivered by Ocado on Monday).  Getting back on the bus I heard someone call out "Elly!".  It was Carol and Barry from nb Winton's Folly sitting near the back of the bus.  It was a jolly trip back to Stone with lots of laughter.  Barry and Carol had errands to run in Stone but we stayed on the bus to the Aston village hall and then our usual trudge across the muddy marina field and home.

I'd found a little gift for Diane (nb Ferndale) while we were at Trentham Gardens.  Ray often refers to Diane as "she who must be obeyed" and that's just what I saw on a coffee mug in one of the stores.  How could I resist.  I went over to nb Ferndale for a cup of tea, a chat, and to give Diane her new coffee mug.  There was also the new floor tiles in the bathroom to check out.

Later this afternoon we had a visit to nb Winton's Folly.  Great company they are.

Photo : a reminder of sunny skies 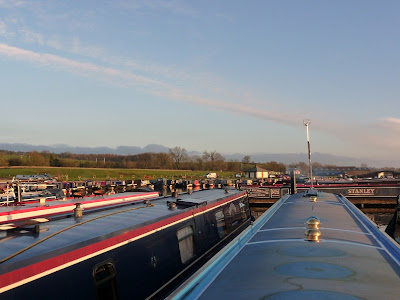 Hi Elly
Sounds like you could do with a signal booster so you can use the phone inside the boat.
Have a look at Boaters Phone Co http://boatersphone.com/
cheers
Yvonne