Stone to Aston Marina : 4 miles, 8 locks
(On Sunday - via the winding hole North of Stone)

I just realized I didn't update our "statistics" when we went out last week.  It wasn't much but it all adds up.  I took a bit of a guess at the distances.

I honestly don't know where the days disappear to.  We're staying up later than we used to at home, getting up later, and it gets dark much earlier.  The expected frosty start to the day didn't eventuate but it was foggy all day.

It was another social day.  I worked a couple of hours after breakfast and then it started.... first came Roland from nb Klara, Jim and Joan from nb Two Jays.  Roland tootled off "home" with a perspex screen to test out on their windows and we sat down for a cup of tea with Jim and Joan.  When they headed off (after having a go at removing one of our last stubborn downlight covers) I was shocked to see it was 1.30pm!  Next came Barry to talk about LED bulbs.  We messed around (another go at that downlight) looking at the different bulbs we have and when he'd gone home we had lunch.

Roland was bringing us back some coal when he went out to by some for himself.  It's such a lovely bonus to have such kind people about... people with vehicles.  I had just got back into my work when Mick said we should go over and collect the coal and check out nb Klara, something he'd cooked up with Roland earlier.  Off we went on our circular walk around the marina to get to the pontoons opposite us and when we were walking with Roland to nb Klara we saw Paul and Elaine (nb Caxton) waving furiously.  So besides having a look around Klara there was more socializing... Paul joining the party.

I ducked out after an hour or so to come back and work.  I got a good stretch of work time in before Mick arrived back in the dark before dinner.

It was really cold today.  I'd gone out to nb Klara without a coat or gloves and boy did I know about it!  We've been lulled into a false sense of security with the mild weather of the last couple of weeks.  On my way back to the boat I bumped into Nicky, who works in the marina office.  She said "It's supposed to snow on Saturday!".  I'd seen one of the weather forecasts say the same this morning but the others didn't agree.  It seems they don't have any better idea of what weather is coming here than they do at home.  Nicky also repeated another prediction we'd heard from someone else this week; that next week it's going to get down to minus 15 degrees.  I can't see that on any weather forecast I look at on the internet and I certainly hope it's not true.

From today :
1. A poor excuse for a shed
2. Today's view from the cratch. Note the pans rescued from the rubbish.  They're handy for holding ash from the new stove.  We don't have a proper container but this will do!
3. Across the marina - new chimney in the right hand corner 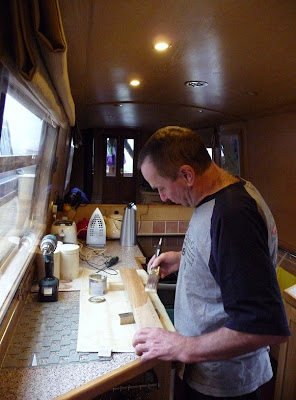 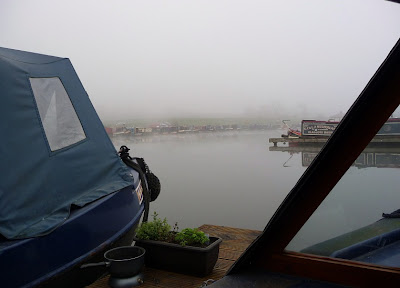 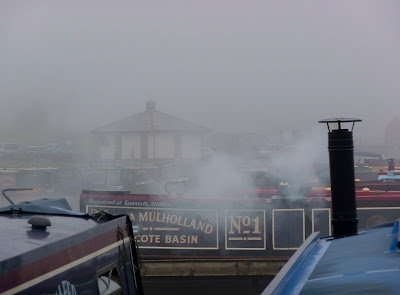