Much colder today!  We got into a few more little jobs.  Mick finished his bathroom cabinet which looks great.  I took the photo below before he re-isntalled the light above it.  Jim from nb Two Jays had lent us a "perspex polishing" kit to try and get the scratches out of one of our double glazing screens.  I had lost my grip on it and it scraped against the solid fuel stove when it was sitting on the floor before installation.  I was so disappointed to have scratched the screen the first week we put them up!  The polishing kit worked a treat and the scratches are gone.  We'll have to buy one to keep on hand.

I took the little kit around to the other side of the marina to return it to them.  That resulted in a cup of tea and a chat and next thing it was lunchtime!  Jim walked back with me to try another great idea he has.  He bought a small black plastic paint pot to use as a cover for their chimney flue when it's necessary to remove the cap to go under a bridge or in a tunnel.  It keeps the rain out.  Jim kindly offered to buy us one on his next visit to B&Q as they're hiring a car next week.  Thanks Jim!

After lunch I spent a few hours on work until Joan, nb Two Jays, called in to bring a few little tarts she'd been making when I was there earlier (another cup of tea).  Now, I can't remember what she called them but they were made using "curds" (which were overflowing on her gas hob as I left this morning!).  They were delicious.

Our outdoor temperature gauge has become useless since we started using the solid fuel stove.  We often need to crack the front doors a little if it isn't really cold out and now the weather station tells us a false reading for "outdoors" because the sensor is in the cratch.  We didn't want to mount the sensor on the outside of the boat as it's not really a weather proof thing.  Ray gave me a little plastic thermometer yesterday so we've hooked it on the outside of one of the windows so we can see it through the window.

The only job outstanding for now is moving the tv.  All the piles of stuff we've had on the living room floor for weeks are gone!  It's such a relief.

The snow didn't eventuate today but I did hear mention that there had been a little in Stafford which is just down the road.  It seems we're in for a cold few days!

Photos today :
1. The finished bathroom cabinet
2. Jim dragging his bags of coal over the bridge
3. Very choppy water in the marina today 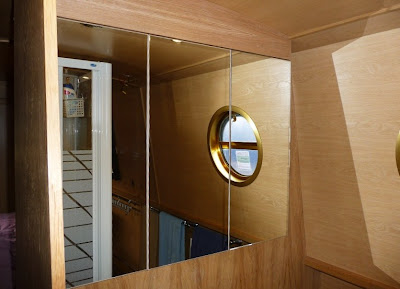 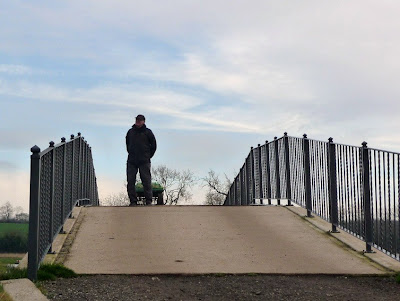 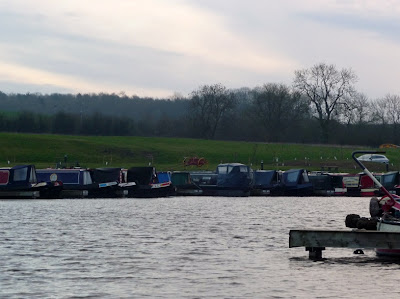 Hi Elly,
If your fire is still in when you take the chimney off don't use a plastic cover, it will melt. You can buy special metal ones or make one yourself from a wide tin can. Measure the chimney and then measure all the cans of cheap food in the supermarket till you find the right size. I think large dog food cans are about the right size if my memory is correct.
Yvonne

Thanks Yvonne,
You're absolutely right... the plastic container won't do while the fire is on. But then I would think it's not a good idea to cover the flue at all when the fire is on. We have seen boats in the marina that have used large soft drink bottles and a myriad of other things to cover the top of their flue. We have one of those little "hat" type things that can be used with or without the extra length of flue. I'll look out for cans the right size - I guess there might be times we need it covered for a short while when the flue is hot. Goodness... it never ends does it. When will we not have to keep accumulating things! :)
Cheers,
Elly