..... that's what Mick told me I should write on the blog today.  It started off as usual. Mick got working on his bathroom cabinet and I sat down to my work.

It definitely isn't the same as working in a normal office and things can be a bit tedious having to avoid printing too much and having so little in the way of stationery.  I struggled on for a bit and decided there was nothing else for it.... I'd just have to print out the job I was working on.  I looked at the printer on the dinette seat beside me.  It was covered in bits of paper and other stuff and there was more piled beside it.  Mick's dinette seat was no better.  It was a mountain of the leftovers of Christmas, the small wheelie case that I'd taken to Germany and started filling with things for him to take back to Australia next month.  The floor beneath the dinette was also disappearing fast.  Something snapped and I couldn't stand it another minute.

Our friends back home will know we aren't used to living in chaos and our house was always neat as a pin. We've been saying we'll tidy up and repack everything once Mick's done with his list of jobs.  If we take something out from under the dinette it's a bit of a chore to put it back so those things have been building up.  Today there was no way I could wait that long, I had to do it NOW!  I didn't care that Mick was midway through his work in the bathroom or that there was already stuff all over the kitchen or that I was in the middle of my work.  I started removing everything from the dinette seats so I could get to the suitcases beneath them.  Before I knew it there was not an inch of space on any surface free.  I dug out the vacuum seal bags I'd bought a week or two ago and sorted out what could be zipped up in those.

Meanwhile Mick was busy chatting to all and sundry.  He went and checked out nb Klara with Roland, he brought in Trevor from a few boats down to see our boat.  Goodness!  I wonder what he thought?!  Next came Phil to check out the new stove, and outside was Barry discussing the mirror removed from our bathroom.  I just forged on with Mick making wise cracks in the background about me having gone crazy.  It certainly must have looked that way.  It was worse than the day we moved onto the boat! Then just before dinner time Ray and Diane (nb Ferndale) came in to check out the new stove and lay claim to the last couple of perspex sheets from "double glazing v1".  Everything was back in order by then.

Now all the spare bedding is in the vacuum sealed bags, the spare clothing and shoes neatly packed in the large suitcase we brought.  I stacked the vac bags inside the smaller suitcase as Mick will be taking that home with him and the vac bags will be happy enough stacked on top of the large case while he's gone.  The Christmas decorations are now stored beneath the dinette floor in the little space there under the hatch.

We have a bag of clothes for the charity store and a bag of clothes to return home.  We really had no idea what we'd need when we were packing to come here.  We brought enough hats and scarves and gloves to sink a battleship.  I think we were expecting it to be cold?  We decided we'd just keep two hats each, two pairs of gloves each and two scarves each.  The rest is going home.

I've also been sorting out our "boat bible" as it was overflowing with paperwork and instruction manuals.  Now it is divided into two halves - one for the boat fittings and equipment, the other for small appliances, maintenance, license, insurance, mooring etc.  We have started adding our own notes to the instruction sheets for future owners.

After all that I've hardly managed any work today.  I'll have to work tomorrow now.

I wonder if this weather forecast is anywhere near what will happen.  The news tonight did say the weekend would be very cold.  We'll see.  We washed the sheets and duvet cover today which takes 2 loads in our machine.  Then I take them up to the marina laundry to dry them.  I forgot all about it and when I went up just now to collect them (7pm) it was cold out!  As I crouched down to duck under the rear sliding hatch into the boat I put my hand on one of the taff seats.  There were beads of ice on it.  Tonight is looking like it'll be a cold one.

Photos from today : Mick doing what he does best. 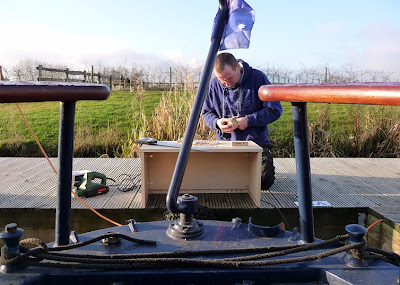 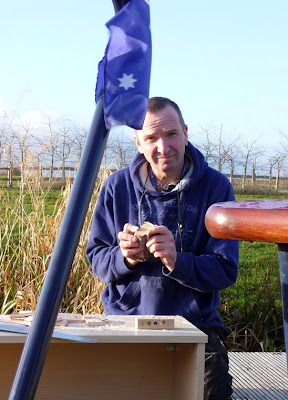 Oh Elly, I do know Just how you feel. Whatever else is going on, Christmas always seems to tip a boat over the edge

Good on you for having a good tidy up no matter what was going on around you. I'm sure you will be a lot more productive with your work tomorrow!

Alan again, The only we find to be able keep a boat tidy and ship shape (as they say)is if you have plenty room to hide everything.

Jill, it's like a fine balancing act and doesn't take much to tip it over the edge!
Jodi, this was a timely post wasn't it. I just read yours. I love the idea and am going to adapt it to suit our current lifestyle. 10 minutes a day must surely mean I can restack one cupboard each day. Thanks for the idea!
Alan, I'd say he would be praying for his workshop!! When we have everything put away it looks so lovely but just open a single door and the image is shattered.
Cheers,
elly