Return to the marina

This morning we took our time as we wanted a couple of last minute things from Morrisons and they don't open until 10am on a Sunday.  Meanwhile there was a constant stream of boats going past in the direction of Stoke.  The Stoke flight of locks is closed for maintenance from 7 Jan to 1 Feb so it seems there may have been a bit of a rush to get through them before the closure.  Our lock here beside the marina will be closed from 4 Feb to 22 Feb so there'll be no cruising up to Stone during that time.

We headed off once the rush seemed to be over.  We needed to get through the next 3 Stone locks to the winding hole so we could turn and come back to the marina.  It really does seem bizarre to head so far in the opposite direction.  The alternative would be to go backwards down the lock and turn at the winding hole below it.  It was good weather still and I don't think Mick much fancied reversing that sort of distance.  Narrowboats don't seem to steer too well backwards!

I had my first go at turning the boat - it's a nice easy winding hole to practice in.  The deep "V" is lined with piling and no reeds or trees or other obstructions.  It wasn't too difficult to turn the boat without touching the sides.

As I prepared the second lock down there was a boat approaching from below.  I spied Bombo and Sam in their life ringing on the roof of the boat below.  Elaine came up and helped with the lock.  They were heading out that way to turn around too but intended to spend another night out.  When Mick exited the lock and Paul was bringing nb Caxton to go into the lock the boats were passing in opposite directions.  I couldn't get my camera sorted quick enough for a decent photo but did manage one.  I don't imagine we'll have many photo opportunities with our boats passing each other in opposite directions!

We made another brief stop in Stone to have our lunch.  While we were there we heard a strange whining noise.  Looking out we saw some powered paragliders.

We've had a lot of discussion and a lot of advice from other boaters in the marina about the best method of reversing onto our pontoon in the marina.  The consensus has been to not get the bow of the boat beyond the pontoons opposite so we don't catch the wind, and use that pontoon (where nb Stanley is moored) to rest the bow of the boat against as we swing the stern around.  All good in theory.  Mick made a good job of turning into the narrow marina entrance and then we tried to judge the best time to turn to face nb Stanley's pontoon.  It must have been just the right timing because it worked a treat!  We ended up with the stern swinging right in line with our pontoon and I was able to just step off the boat with rope in hand.

Of course this was the very first time that not a single boater came rushing out to see who was coming in.  There wasn't one solitary spectator!

We went up to the office to extend our mooring time as we now need until the end of March when Mick will be back from Australia.  We also needed a bag of coal to try out the solid fuel stove.  Barry and Carol from nb Winton's Folly came in to check out the new stove and stayed for a gossip.  The fire got going just fine and even with the perfectly still evening the smoke came out the chimney as it should so it's drawing well.  So now we're sitting here toasty warm.  Perfect.

From today :
1. Mick cruising past the hire base at Stone
2. Our kangaroo tiller pin in action
3. Paul on nb Caxton with Sam and Bombo in their lifering
4. Aussie boats in passing
5. Paraglider 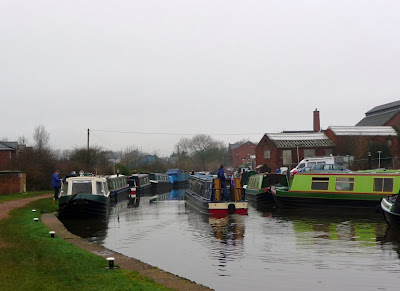 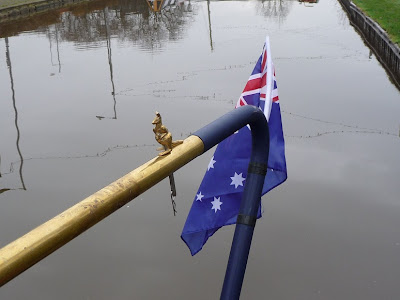 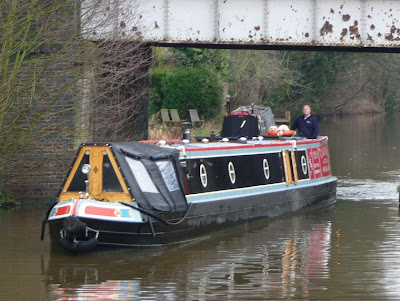 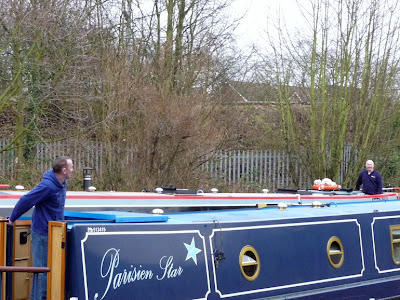 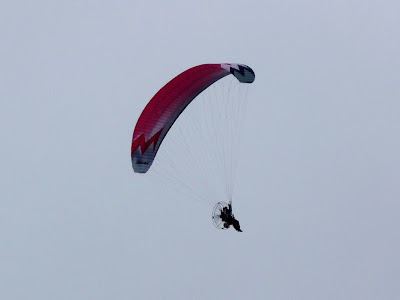 We went to Morrisons to stock up for our annual cruise, on a Sunday. We could shop but not buy until 10 am. We did have a great breakfast while we waited...

Tony,
I've heard that before... that's stores will let you fill your trolley but not go through the checkout until the permitted opening time. I'll keep it in mind for next time.
Cheers,
Elly