We got up this morning, both of us with a mission in mind.  Mick had been offered a trip to Midland Chandlers in Penkridge and was very enthusiastic about being driven somewhere.  Roly from nb Klara has a van so they were off to buy coal and Barry from nb Winton's Folly went along too.

I was in need of a good walk so had decided I'd walk into Stone to get some fresh fruit and veg at the supermarket.  The ground was icy so I walked along the towpath for a change.  It was a little slippery in some places where the ice was thick but I thoroughly enjoyed the walk.  Along the way I noticed two sets of birdie footprints in long tracks along the frozen canal.  They were large so I figured they belonged to some swans.  At one spot I could see one of them must have fallen through the ice!  At the next bridge there they were.

I'd barely started my walk around the supermarket when I looked up to see Mick, Roly and Barry coming into the supermarket.  They'd come to buy some beer (which you do when you have the offer of a lift!).  I hurried up with my shopping and came home with them.  That was a nice bonus.  Thanks very much Roly!

When the boys unpacked the coal from the van they discovered that between them they were 2 bags short.  Roly and Mick went back to Midlands to advise them of the error and luckily the girl at the counter remembered counting out 8 bags for their trolly.  Their receipts showed 10 bags.  So now we have a different brand of coal to try.  We've been using the Excell brand that the marina sells so far.  The new bags are Stoveglow so we'll see which we prefer.  At £11.50 for Excell at the marina and the Stoveglow being £10 at Midlands, pricewise we're better of with the Stoveglow.... especially as we get 15% off at Midland Chandlers for 6 months.

While I had lunch there was a bit of a grinding noise which took a few minutes to identify.  There was a boat coming into the marina and as we're near the entrance, the ice was being pushed against the boat as they crashed through it.  It must have taken them about a dozen forwards and reverses to turn from the entrance into the middle of the marina.  I gave up watching after that.  With the engine revving they were able to break through the ice directly in front of them but there simply isn't any way to turn a boat through ice.  They must have been desperate for diesel or a loo pumpout!

I had seen Carol from nb Winton's Folly as I headed out this morning and arranged to go over after lunch and help her set up a blog.  When I arrived she was watching the ice breaker... and Barry was about to have a melt down over trying to install the new water pump he'd bought at the chandlery.  Mick came over to lend assistance and Carol and I sat down to work on the blog.

We went back to nb Winton's Folly for dinner a little later.  Such a treat to have someone else cook for you... especially as we haven't eaten many meals at all outside the boat.  Thanks Carol!

Photos today :
1. The canal looks like an icy road
2. The swan prints
3. Close up
4. Ooopps... someone fell through
5. There they are in a section under a bridge that's not frozen
6. Boat crashing through the ice
7. And again
8. Carol typing her first blog entry 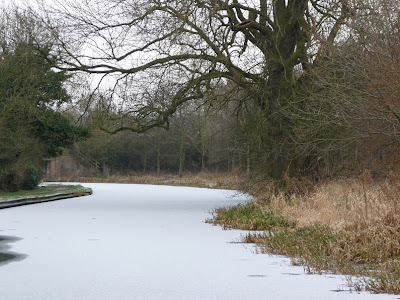 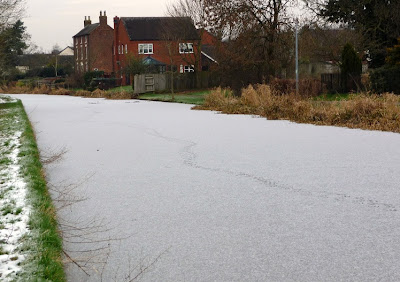 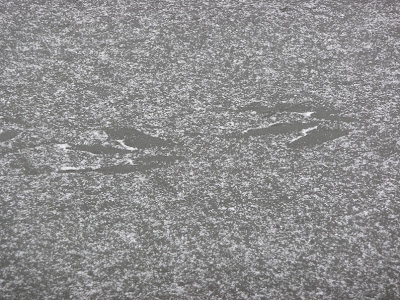 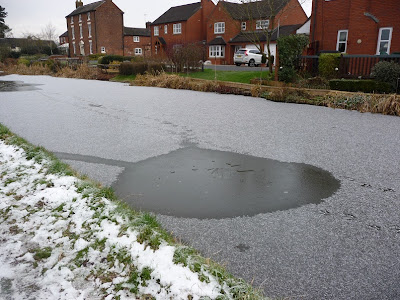 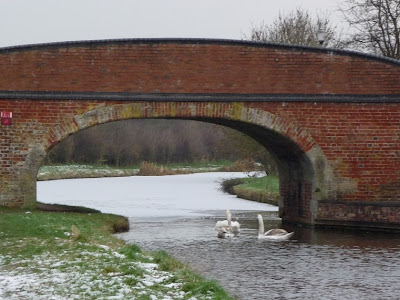 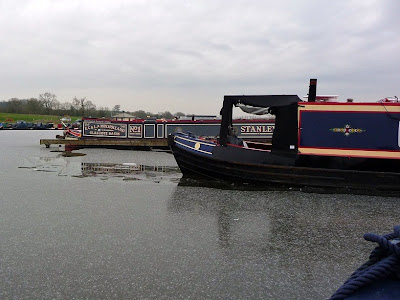 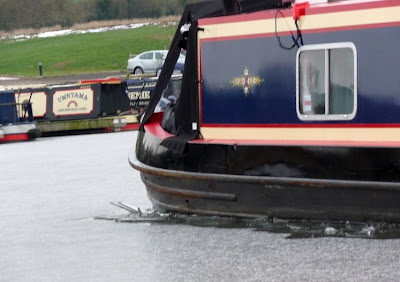 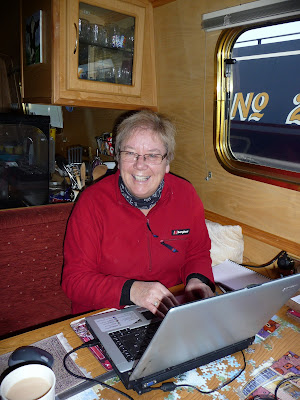 Can you please give me Carol's blog address? I'm really enjoying what you are all doing in your marina!